And so you call me happy 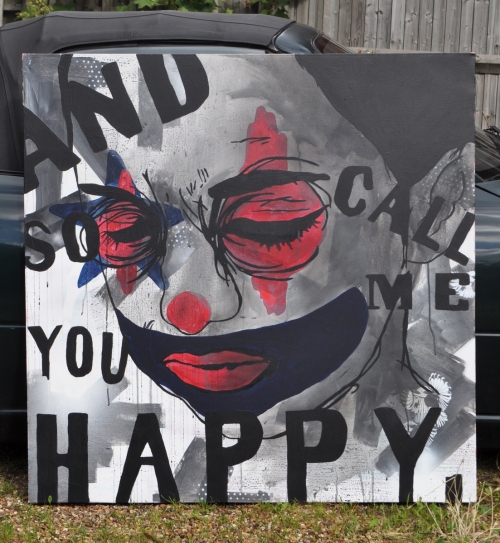 As you can tell this picture has a clown in it. I think this might be my fourth picture with a clown in it and despite the fact I think i’ve been doing them as some form of therapy I still don’t like them, not one stinking bit. Have you seen the film ‘It’? OK, ignore the last bit in the film where it turns into a big useless spider that gets defeated by an earring but all the bits before that are scary as hell. This clown is only a juvenile though so isn’t as scary as he could possibly be but i’m sure he could still give you quite a fright if he popped out at a surprise birthday party. That said he looks a little depressed which means he would probably be sat by the bar getting drunk anyway and i’m sure as you walk passed to go to the toilet all you would hear him mutter is ‘And so you call me happy…’

FOR SALE
Title: And so you call me happy
Media: Spraypaint and acrylic
Size: 1m x 1m canvas

Comments Off on And so you call me happy