Things are beautiful if you love them 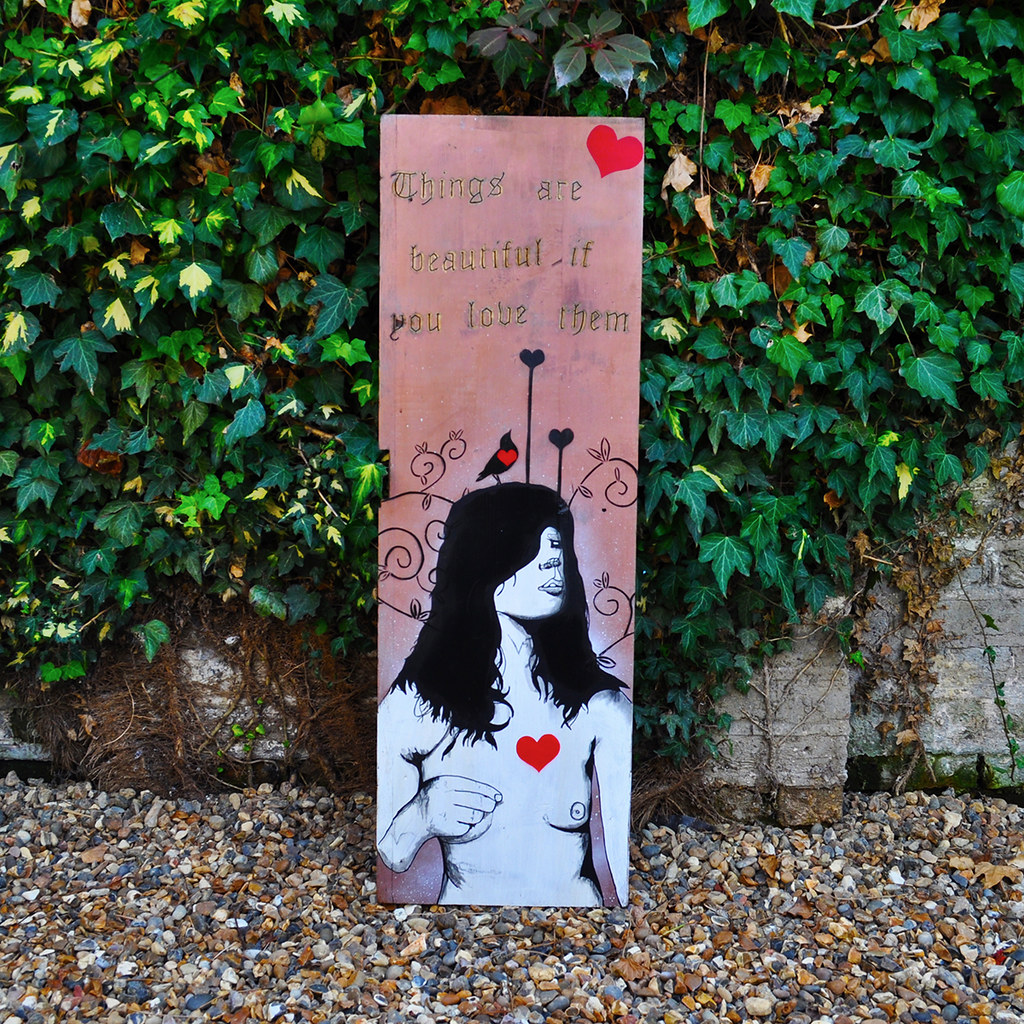 I just love rescuing an old bit of wood to paint on. Previously it was just an old shelf destined for the tip. Now it’s probably still destined for the tip but at least she goes out looking good. I even tried my hand at a little engraved lettering on this one – which was a bit trickier than I thought but still looks pretty reasonable in the flesh. Considering I didn’t have replacement tips for the little drill thing I was using I was fairly happy with the end result.

‘Things are beautiful if you love them’ is a nice little quote from French dramatist Jean Anouilh. I particularly like the idea that anything can be beautiful if you love it and the converse that things aren’t inherently beautiful but the act of loving them makes them beautiful. Heady stuff for a Friday morning. I’m sure normal service will resume soon enough…

Comments Off on Things are beautiful if you love them

It would seem that the despicable character that is Nathaniel Bobois has managed to make another appearance in one of our pictures. He’s just too much of a rogue not to paint. It’s hard to believe that he and the amazing Roche Bobois came from the same parents. So,  Nathaniel challenged the might of id-iom to a game of pool and that’s not the kind of offer we refuse. With Nathaniel preening and boasting around the pub we had a quick game of Paper, Scissors, Rock to see who would play him first.

I won and took to the table with a quiet determination. Meanwhile Nathaniel was still fannying about selecting a cue when I broke and took down three yellows to boot. Already on the back foot Nathaniel tried and failed to claw it back. I sunk the black about a minute after he took his first shot but he was not put off so with a volley of swearing he put down more money and challenged the other member of id-iom to another game. This went on till we’d cleared him out of the $150 he had. Don’t ask me why he had dollars on him but he did. It was money and we took it anyway. Here at id-iom we both feel a bit sorry – not for Nathaniel – but for his brother Roche because he’s just going to have to bail him out yet again…

Comments Off on Game over

Taking care of the necessary 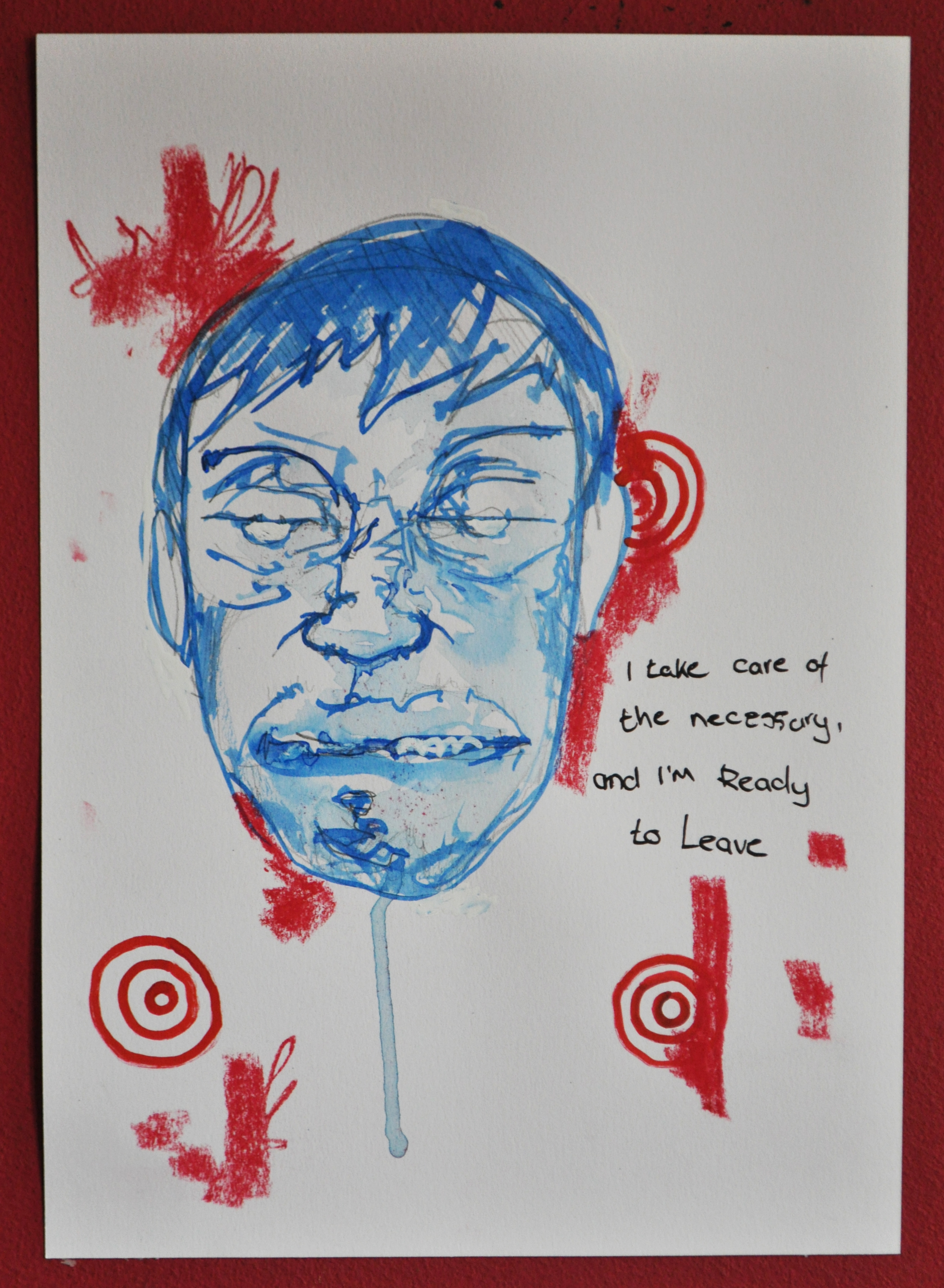 Taking care of the necessary

Like  the infamous Mr Wolf from Pulp Fiction this guy takes care of messy problems. He’s a cleaner if you will and once he has done his job he’s ready to get the hell out of Dodge. Being a cleaner can be a tricky profession and  involves destroying or removing any incriminating evidence at the scene of a crime, typically a murder, to make it as if the crime never happened or certainly not in the way it really happened. I’d say most cleaners are at the lower end of the social scale but not this fella, he’s got important friends and is rolling in the deep end because he’s just the best there is at what he does.

Comments Off on Taking care of the necessary

Sometimes, when I’m feeling a little low I play ‘clocks’, ‘the scientist’ and ‘yellow’ all at the same time, on constant repeat and with increasing volume until I feel that I am actually Chris Martin. It’s such an amazing feeling to consciously uncouple from yourself and hitch your trailer to Mr Martin’s consciousness. Truly mind blowing. Only joking. I can’t imagine what kind of tat you’d find floating around inside his bonce. You’d be experiencing some serious cognitive dissonance that’s for sure.

Anyway it’s been a good long while since we’ve done any celebrity quotes and I just couldn’t resist  doing a new one when I saw this quote from Coldplay’s sassy frontman. I think I’d safely recommend the helmet option for him. Probably safer that way. Now I’ve just got to think of somewhere fitting that I can deposit it on the street. Drop us a line if you’ve got a good idea…

Comments Off on Chris, I think I’d recommend the helmet option… 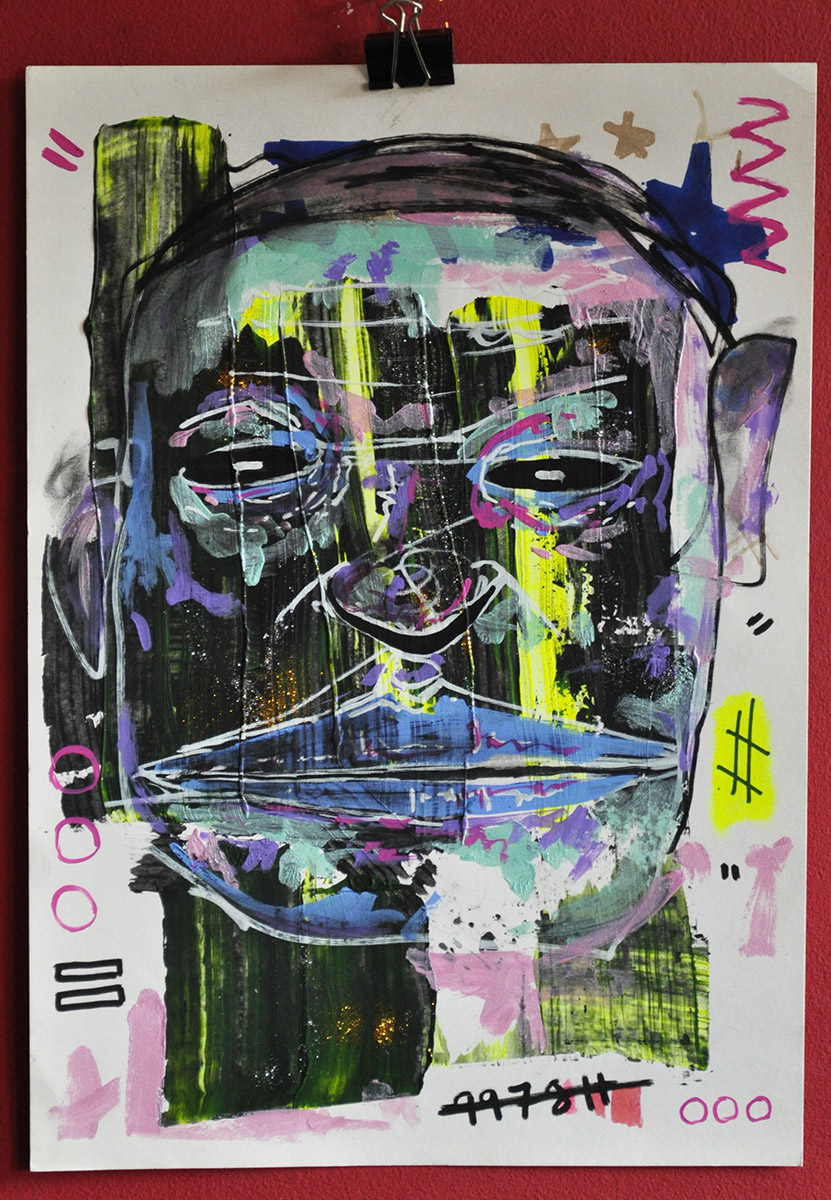 It’s coming to the end of the brief UK summer but we’ll hopefully still have a few days of sunshine left. Sadly, this cannot be said for this chap as a dark cloud has descended on his life and there’s nowt he can do about it. Why i hear you ask? Well he’s just found out that his ex (who recently left him due to his infidelities) has just won the Euromillions with the same weekly numbers they used to buy every week. She’s changed her mobile, moved in with some friends he’s never seen or heard of and is not replying to any of his increasingly desperate messages or emails. He’d try sending a carrier pigeon if he knew where to send it. To add insult to injury he’s just found out that she has been seen out on the town with one of her old flames. Now that’s enough to get anyone down in the dumps. I tried to tell him that everything happens for a reason and that it’ll be okay in the end but he wasn’t having any of it and just glared at me and stormed out. You can’t say I didn’t try…

Comments Off on A dark cloud descends 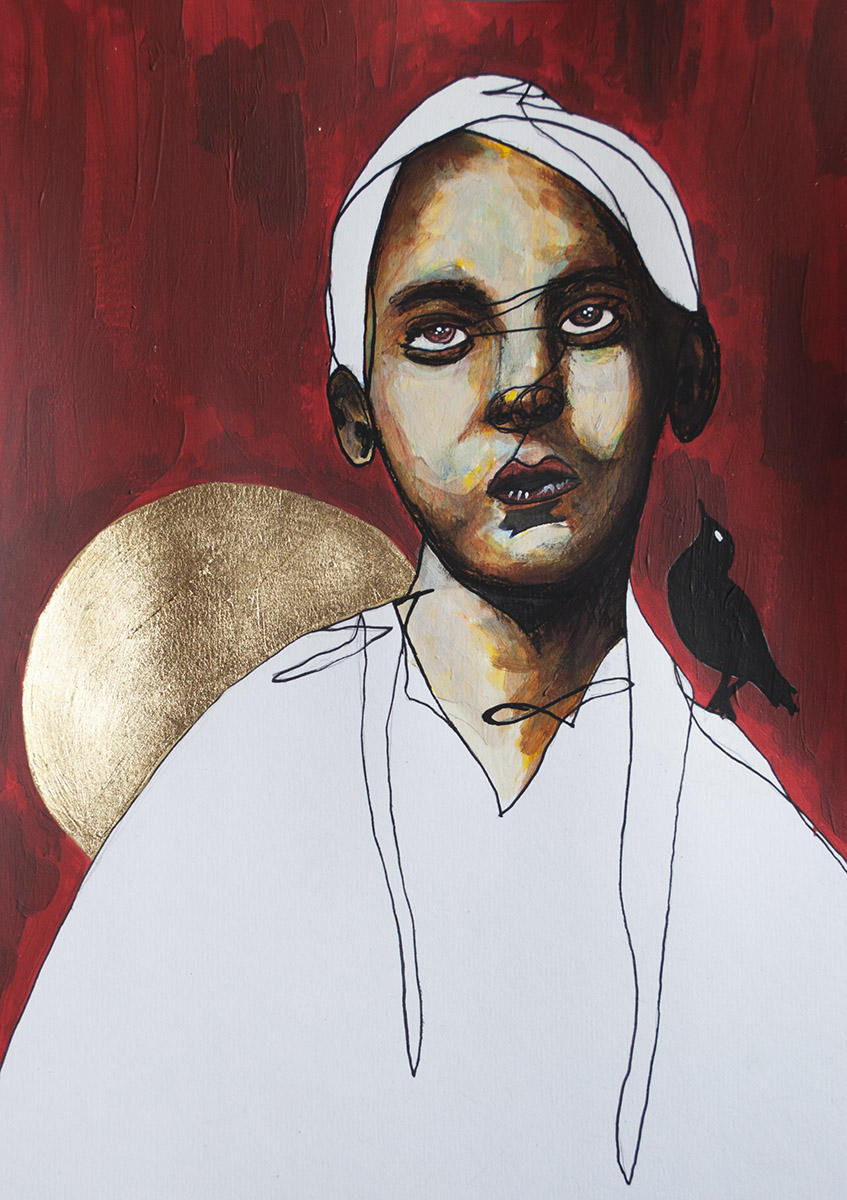 You have to wonder why this young chap is looking so down. We’ve all heard the phrase ‘red sky at night shepherd’s delight, red sky in the morning shepherds warning’ and from the title of the piece you can probably guess what time of day the image is depicting. He’d had a good day shepherding, lost no sheep and his mother had packed him a truly amazing pasty for lunch. What more could a lad ask? I’m not sure what his problem was as I tried my best to get him to break out a smile out for me but he just sat there with this sullen little look draped over his face. Anyway, before I could release my full comic potential, which would surely get a smile out of him the sun started to set and this was the best I got. Sometimes I wonder why I bother…

Comments Off on The Setting Sun 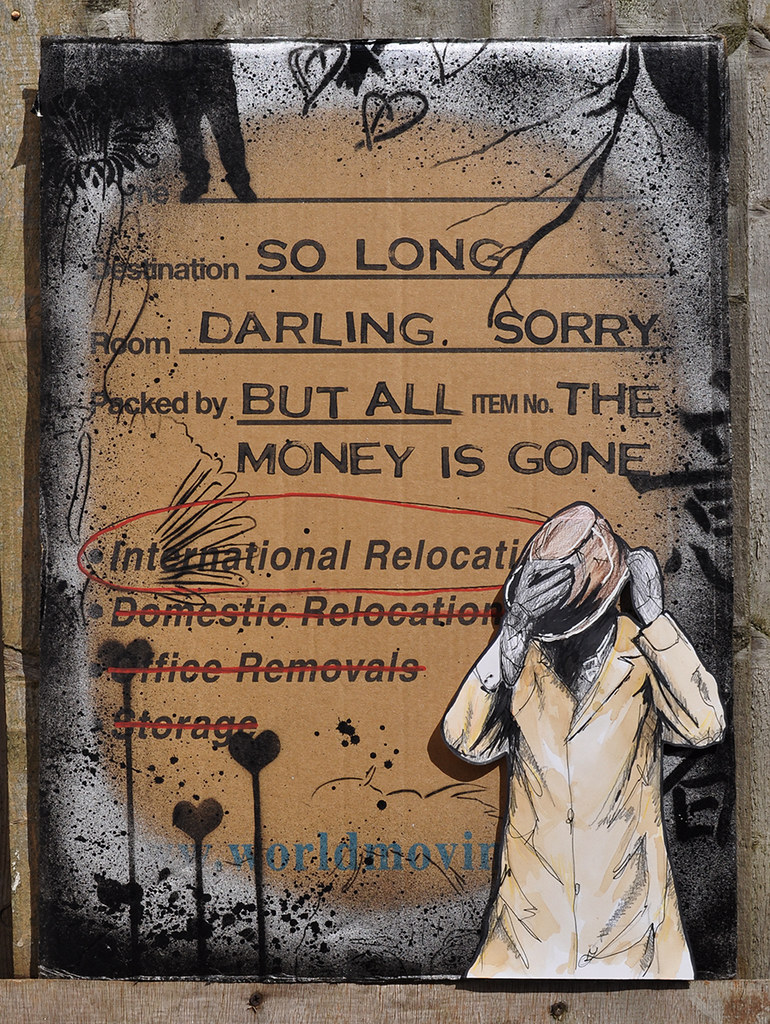 The gentleman in the piece is clearly something of a vagabond as it would appear he has cleared out all the bank accounts and made a hasty international departure to an uncertain destination. And all he left behind was a short note. The no-good piece of dirt. If I ever get my hands on him…

Comments Off on Relocation

With the modest success of a few of our supermarket subversions recently my brain seems to have jumped onto the whole fake ad/culture jamming bandwagon and now it seems I can’t go to the shop without coming up with some new form of contrived nonsense. And today’s offering is a pretty good case in point.

A long time ago in a galaxy far away I was strutting the aisles of my local supermarket trying to locate something they undoubtedly didn’t have when my eye chances upon the full fat milk with the blue lid. And that was all I needed to connect blue and milk and come up with the blue milk from Star Wars called bantha milk. We even see Luke Skywalker pour himself a glass in Star Wars whilst he’s living with his aunt and uncle at their moisture farm in Tatooine.

That was all I needed in the way of a plan so went home and set to work. A couple of parsecs later and I had my label good to go – complete with interview with their sand person dairy farmer on Tatooine. All that was then required was a bottle of milk, some blue food dye and a fake price label and I was good to go.

I can already see the print and TV advertising that would go alongside this new miracle food with a tag line along the lines of “With a few glasses of semi-skimmed bantha in you a day you’ll be strong enough to pull the ears off a gundark in no time.” In fact, that’s given me an idea…

How can i tell her? 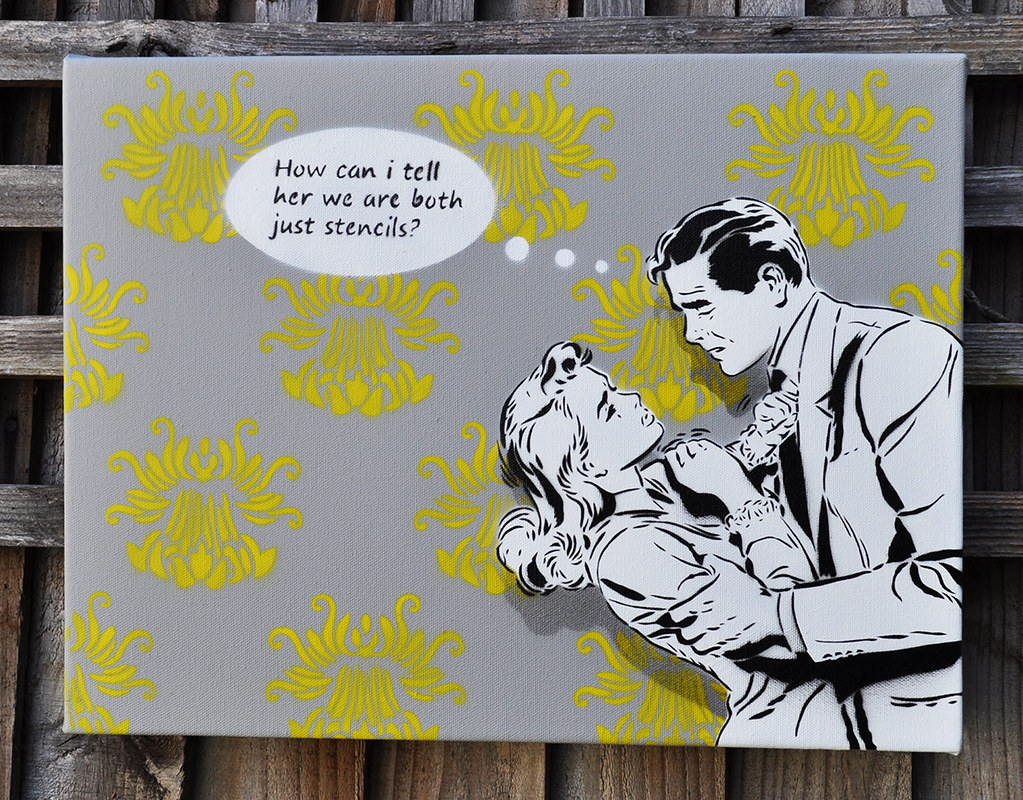 Well, well, well, it’s clearly that time of year again. We originally did a wall sized version of this almost 5 years ago now for the Big Draw back in 2009 and since then occasionally get commissioned to do a small version for someone’s wall. I think my favourite aspect of this picture is his desperation at his inability to tell her that they aren’t really lovers and are, in fact, just stencils. Life can be tough, can’t it?

Comments Off on How can i tell her?