Now this is a bit of a weird one for us. We usually like to stick some pithy words or a face on any pictures we do, don’t ask me why, we just do it would seem. This is why this piece remains something of a mystery.I was in the studio making what I thought would be a spiffy background for us to work on when the other half of id-iom comes in and says he likes it as is. That was enough to make me stop and ponder what he was talking about. This contemplation sadly went on for about 6 months longer than expected…

I was looking for some gold leaf when I came across this canvas again and, would you Adam & Eve it, I suddenly beheld what the other half of id-iom had seen all that time ago. So, before we potentially do anything else with it we thought it probably deserved to see the light of day.

Comments Off on Contemplation time

After a brief hiatus we’re back on the scene! Sometimes inspiration is hard to come by and sometimes it’s as easy as having a look out of the window. Today’s piece was definitely the latter. Especially as we currently have the verdant pastures of the beautiful Isle of Man to view. A brief glance out the window at the green plants and fields, blue sky and various flowers gave me my colour palette then it was just a job of locating a couple of  canvases and setting to work for an abstract landscape. Whether you’d recognise it as such is none of my business. 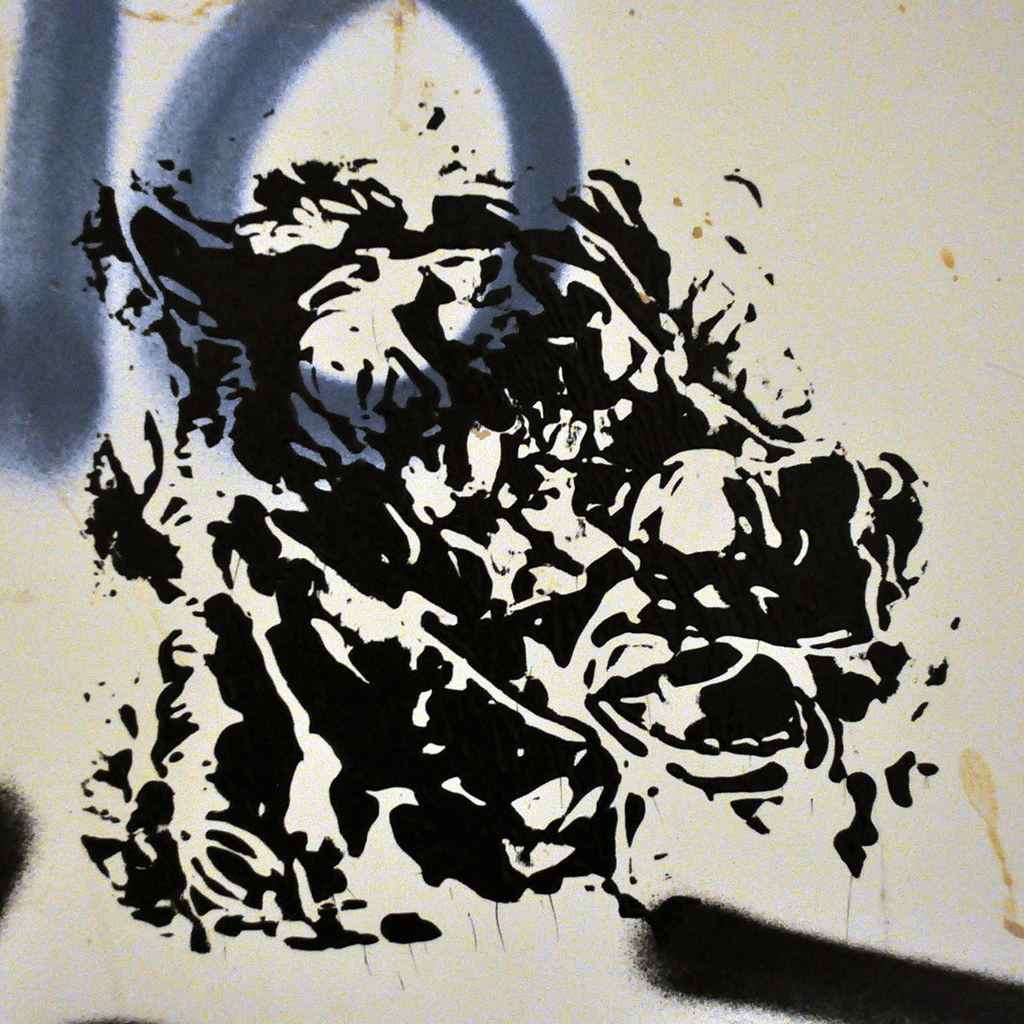 Sit back, relax and tell me what you see when you look at these blobs of paint. If you said ‘horse’s head’ you’re probably a psychopath who imagines grisly sights in the normal run of everyday life. Only joking. This is what happens if you use a stencil of a horses head about 30 times then whack the stencil on the wall while it’s still wet to see what you get. The end result is somewhat pleasing in my humble opinion. Join us again tomorrow for more accidental art…

Comments Off on Rorschach test

Did you know that the Earth is not a perfect sphere but is, in fact, an oblate spheroid. Which is a sphere that is squashed slightly at its poles and swollen at the equator. Our globe, however, is not even a perfect oblate spheroid because mass is distributed unevenly within the planet. The greater a concentration of mass is, the stronger its gravitational pull which creates ‘bumps’ around the globe. Weird eh?

Today’s sphere however is just about perfect and comes complete with some fancy stripes. She’s on A2 paper and is made using the magic of stencils and spraypaint. Drop us a line if interested.

Comments Off on De sphaera mundi

There is something called the bouba/kiki effect whereby people are shown two shapes – one is a sharp edged star-like shape and the other a more rounded blob – and they are then asked to assign the names ‘bouba’ or ‘kiki’ to the shapes. An incredible 95% of the participants selected the curvy shape as ‘bouba’ and the jagged one as ‘kiki’ which suggests that the human brain somehow attaches abstract meanings to the shapes and sounds in a consistent way. Which is just plain weird when you think about it. I’m not sure which name I’d attach to this shape as it’s a bit of both. Confusing.

This confusing shape has been sprayed on A2 paper then had some dashing blue stripes added. If you like it enough to want it then drop us a line…

Comments Off on Bouba or Kiki?

A sphere of some considerable influence

‘I find this work menacing/playful because of the way the disjunctive perturbation of the purity of line notates the substructure of critical thinking.’ said the The Instant Art Critique Phrase Generator when I asked it about this work. A truer word has never been spoken. She’s on A3 paper, made using the magic of spraypaint and stencils and is currently available should anyone like her enough to want to take her home with them…

Comments Off on A sphere of some considerable influence

So this is the second of my cover redesigns for some 12″ records I found abandoned. I just had to give them a good home. At least temporarily before I repainted them and placed them back on the streets. With this one it originally looked something like this:

But now has some extra 3D effect linework in there. My skills are so seamless that my girlfriend thought that my update was the original cover. Until i put the ‘red’, ‘white’ and ‘blue’ lettering on there. The ‘white’ lets me down somewhat although I think the overall effect still works nicely. Anyway best of luck in finding it but we’ll update when they’re all out and about…

Also, if you don’t know the song and want to hear it you can do here:

There isn’t much I can offer in explanation of the motivation behind this piece other than we found a piece of paper containing the words in our house after a night’s partying. I couldn’t begin to explain exactly what the writing is about other than I’m pretty sure it ties into some drunken conversation we will have been having. I realise it’s an odd little piece but it is what it is an i quite like it as it goes…

It’s made using acrylic and spray paint. It’s a generous A2 in size and is signed on the reverse.

Here is the ebay link.

Comments Off on Eyaa Chris

The Mark of the Night Writer

The Mark of the Night Writer

“I find this work menacing/playful because of the way the sublime beauty of the gesture seems very disturbing in light of the eloquence of this piece.” I thought i’d start with a quote about this piece from a very well respected website as it really seems to capture the essence of this piece.

I’m only joking as this piece is not so easy to describe. Unless, of course, you recognise the symbol in the middle in which case I need explain no further. Winter is coming.

Comments Off on The Mark of the Night Writer