The shadows of pleasure

There I was having a few drinks late on Friday when inspiration struck. In front of me were a few empty beer cans, a pencil case and a few other bits and bobs needed to make quick work of the empty bit of paper.

Using the shadows from the beer cans I’ve created this minimalist piece which is a step away from what we normally do. Invariably we would stick some text or maybe a face across the middle of it and call it finished. This time though a modicum of restraint was used and I stopped before I could carry on. Everyday is a school day…

Comments Off on The shadows of pleasure

Bored of waiting for coronavirus to come to you? Well now you don’t have to. Corona have bowed to the inevitable and teamed up with the world renowned creators of Covid 19 to bring you this zesty and infectious small batch artisanal version of their classic brew. Great for 14 day mini breaks at home or abroad.

I’ve been trying to resist the obvious Corona label update but temptation finally got the better of me. C’mon ‘zesty notes which are enhanced by adding a wedge of lime.’ is just not going to cut it with today’s hyper paranoid world view where the beer Corona has somehow been inextricably linked to a global pandemic. So i’ve fixed that at least.

Comments Off on My corona 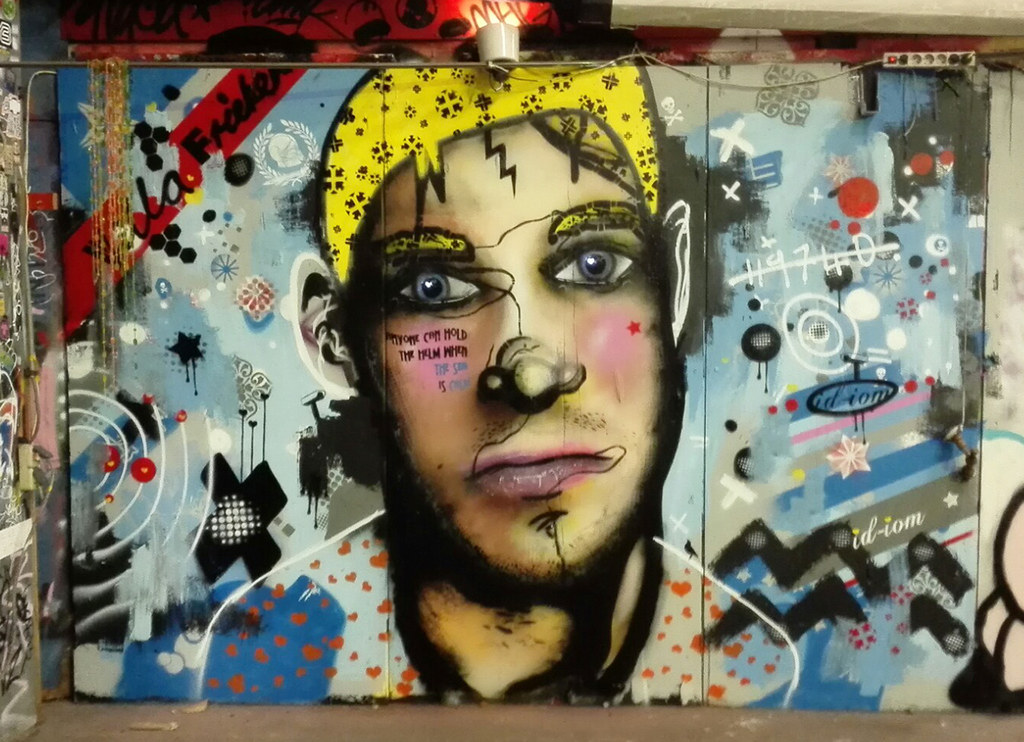 So there we were only just back from the TT in the Isle of Man when we have to start packing for a swift road trip to Amsterdam with a car full of other artists and a boot full of paint for, what is probably, the final Paint & Beer at Villa Freikens. The elite travel squad consisted of Lil Miss Wah, Korp, Process Smith, My Dog Sighs and ourselves. Quite a formidable team wouldn’t you say? Time to hit the Eurotunnel.

On the drive we were all assigned roles – My Dog was driving, Process was to be navigator (with Sholto as backup in case things got crazy), Miss Wah was trip videographer, Korp was logistics and H&S, leaving Hugo on social media but his phone died as soon as we arrived on Friday and he never quite managed to get it charged again. Maybe it wasn’t the best idea to put him in charge of social media…

Before we knew it Saturday was on us and it was time to throw some paint around and drink some beer – as the name of the event suggested. We managed to get finished up in reasonable time then added the LED’s for the eyes (which don’t look half as good in the pic as they do in real life), did a little chit chat then headed off to the bright lights of central Amsterdam.

It was before 11 when we hit town and about 4am when we realised we couldn’t find another drink and so should probably head back. After an amusing episode with Hugo trying to climb a gate with spikes on at about 4.30am we managed to make it back inside Villa Freikens for a final drink with whoever was still sat up. Getting woken, having to pack up and get back in the van all happened in pretty quick succession on Sunday then it was a leisurely drive back home. Win all round. Cheers to Snub for having us, My Dog for driving and everyone else for putting up with us.

Gravitas – Back to the Future mixtape project

As we found ourselves in sunny Southsea on the weekend and knew we’d be hanging with the king of free art drops, MyDogSighs, we thought we’d best take a little something down to distribute. What better than a new instalment of our ‘Back to the Future’ mixtape project which sees us combine our two of our loves – music and street art. Our initial plan was to get some new mixes together, burn them on CD and then put them out on the street with some exclusive slate cover art. This will soon be followed by mixes from a (hopefully) eclectic range of other Djs.

Along with the legend ‘Gravitas’ (meaning seriousness or dignity) we have a couple of curious cats who have managed to make an appearance and peek interestedly round the slate. I haven’t really got a more in depth explanation than that currently… As were strolling down the promenade the pier came into view and we had a natural photo opportunity! After much fussing with placement and lying full stretch on the beach in order to get a good snap we had another piece live on street. I wonder what will happen to this one?

Free art beach drop (cheers to Korp for the photo!)

There’s some contact details on the back and we’re hoping that we’ll get a reply/critique/abuse via email from whoever found it and then hopefully they’ll upload it to the web and share it around for further praise/ridicule. So, if you see one of these suckers on the street feel free to take it home and then lambast us via email on our shoddy skills and poor tune selection.

After uncovering the sordid affair that has been happening in the cloud room I thought it best to reveal all in one big panorama. You’ll just to trust me that it looks better in person considering that the demolition team are now going to be the only people to actually see it in situ.

Lord of the Concrete Jungle (in situ)

We were commissioned by the Electric Social (who we’ve worked for before) and Tiger Beer to design a picture that would adorn a large wall upstairs at the Brixton bar/club. Once we had a design finalised we measured up and went off to buy some canvas. At this point I didn’t realise quite how bit a 5.5m x 2.6m canvas would actually be…

It’s always fun to go big but we almost bit of more than we can chew with this one as the canvas was far bigger than any room we had to work on it so we had to come up with some fun logistical fixes to get it all done. Just priming the huge canvas took long enough never mind painting the background and cutting stencils. Anyway it took a while longer than expected but we finally managed to get it finished and drop it by the club with a feeling of relief. I believe they had a tricky enough time mounting it and getting it up on the wall but I think that was only to be expected with this billboard sized monster. At least they liked it and first impressions from customers have apparently been good so, thankfully, that’s another job done.

I told you our squirrels were trouble…

I told you our squirrels were trouble...

I’ve mentioned the squirrels around here before. They’ve even been in the newspapers – and here’s a little coverage from The Guardian to prove it! Anyway, believe me when I say they are bad. Real trouble. So there I was walking through the park when I get the feeling I’m being watched. I cast a furtive eye over the benches near me when I see him sat there, just staring at me and emitting a low guttural noise that doesn’t sound very friendly at all. A second glance reveals the empty cans and cigarette (or joint – who knows?) As I quicken my step I chance once last glance behind me and he seems to be chuckling to himself with an evil glint in his eyes. Making my way home apace I could have sworn I could hear rustling sounds behind me but couldn’t see anything. I just concentrated on finding my keys…

At least he hadn’t been on the crack. They are always worse. I’m not sure if I’ll be walking that way again…