It’s day 2 of Insect Week here at id-iom and today it’s the turn of the UK’s largest beetle – the  mighty stag beetle. It is now accepted that stag beetles, whilst of an interesting design, are harmless to humans – but it didn’t always be this way. According to British folklore they were capable of summoning thunder and lightning and even flew around with hot coals in their jaws setting fire to buildings! Now if that isn’t slander right there then I don’t know what is. It’s downright rude. In an effort to rectify this we’ve started legal proceedings against British folklore on behalf of all stag beetles. Until then all we’ve got to hold your attention is a picture of a very regal looking stag beetle called Gatsby.

If you need Gatsby adorning your wall then his critical dimensions are 21 x 29.5 cm (A4) and he’s been created using the magic of acrylic and paint pen. Just drop us a line and we can make it so…

Comments Off on Gatsby 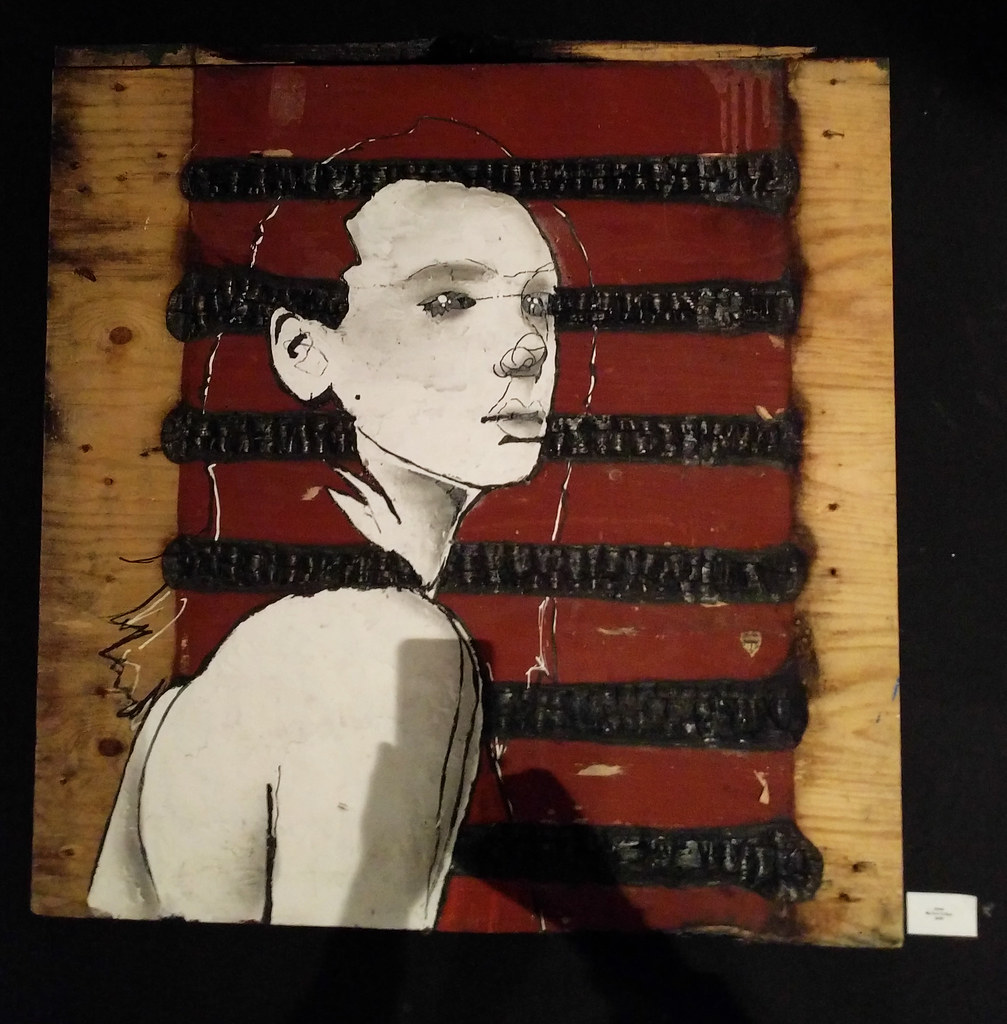 There I was minding my own business on the way to the pub during summer when I came across this amazing bit of wood. Don’t ask me how the burn marks came about because I’m not sure but I would be interested to know. I’d like to imagine it involved a steel drum being used as a barbecue – but that’s pure speculation on my behalf and probably just because I’m a bit peckish.

With such a surface to work on I just had to figure out what to paint and how to paint it – and that is where the trusty pound shop filler came in handy. Anyway, once a liberal coating of the stuff had been applied to cover up the burned areas I wanted to paint over then we were good to go. For once we managed to keep it quite understated and just have the girl and the burned strips.

She’s up for sale and I’d love for her to go to a new home so we can actually have a bit of space back for working in. Drop us a line if interested…

Comments Off on My turn to burn

There’ll always be an England (front)

There’ll always be an England (back)

‘There’ll always be an England, while there’s a country lane’ or so the patriotic song made famous by Vera Lynn goes. Apparently it was written in the summer of 1939 and became hugely popular on the outbreak of World War II. Now whilst i’m not English I do live in London and have a certain affinity for England and, by extension, the English. It’s heartening to know that all the brave British soldiers who laid down their lives to defend our green and pleasant land did so in order that their progeny could bring the country to a standstill by rioting in the street – all to get their hands on the latest free stuff – trainers, computers, phones and the like. There’s nothing like having a good cause to fight for…

Now whilst i’m not about to pretend that there aren’t certain segments of the population who have a legitimate grievance over certain issues I’m pretty sure that rioting and looting is probably not the best way to get your voice heard in a democratic country. Maybe it was the voice of youth galvanised by the guerilla looting tactics employed by those who clearly only had financial gain in mind that led this to become a nationwide event. Or maybe the footsoldiers of capitalism were merely showing off their new found solidarity by rising up and showing The Man just how they run thing’s round here. Either way it was an ugly episode and one worth examining.

For those unfamiliar with the song and to commemorate last year’s youth rebellion I’d like to present Vera Lynn’s version for your listening pleasure (complete with lyrics). I’m surprised the rioters weren’t singing this en masse when they raised a people’s army and tried to seize control of the state by storming the ancient seat of democracy. Oh wait a second, I’m getting confused again aren’t I? They were just rioting for a laugh anad a new pair of Nike’s. My mistake…

In order to maintain our membership of the urban artist elite we are legally obliged to do a couple of these ‘social commentary with a cheeky twist’ style pieces every year. My favourite touch is the tiny rioter conducting the burning of the local JD sports store. Keep your eyes peeled for the next one as it may have even more obfuscated meaning, sarcasm and hidden irony…