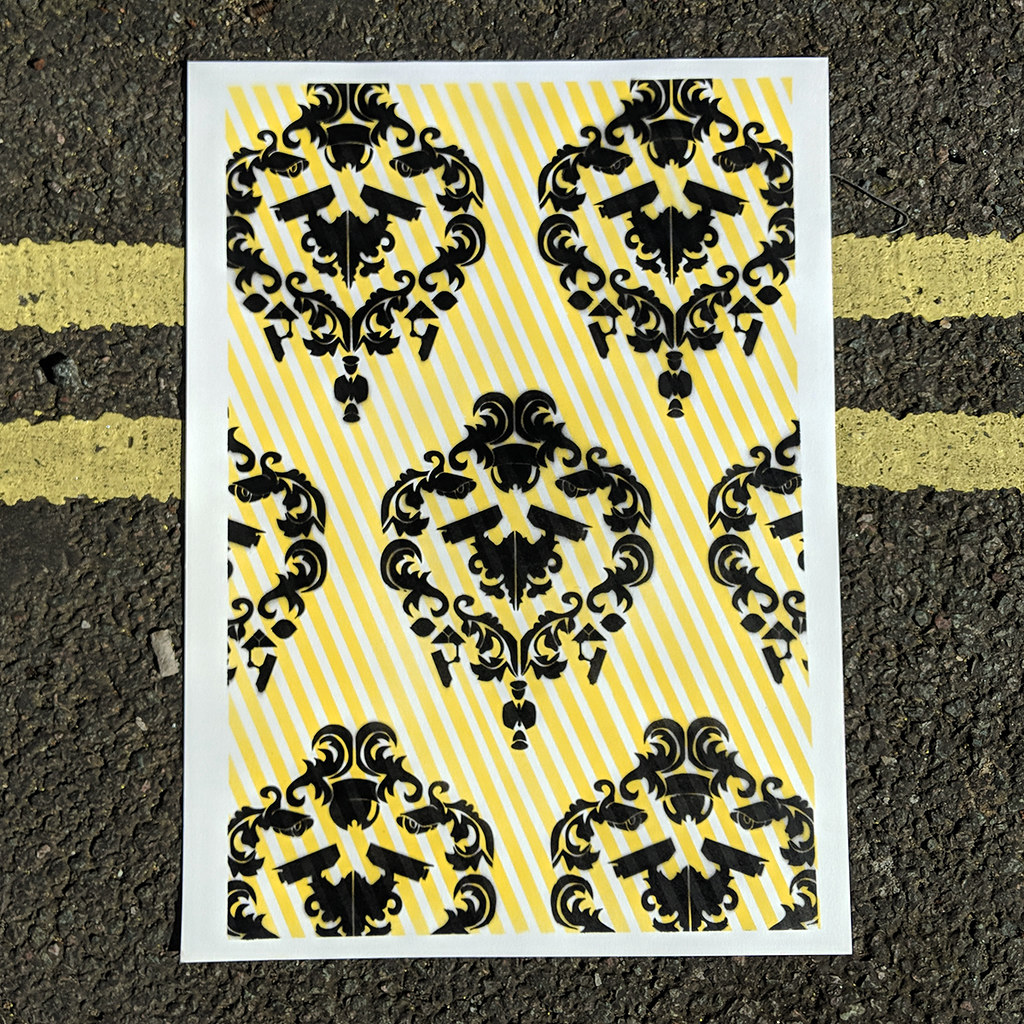 ‘I always feel like somebody’s watching me’ sang Rockwell in his 1984 hit (which features Michael Jackson on backing vocals assumably because his dad was Motown CEO Berry Gordy). And he wasn’t wrong. In today’s always-connected society the feeling that you’re being watched is very real indeed. Because you probably are. If the proliferation of CCTV covering the length and breadth of our fair isle isn’t enough we have our online movements tracked by just about everyone with most of the information apparently available to the highest bidder. What strange times we live in.

To commemorate this I decided to create this lovely bespoke wallpaper as a reminder. She’s A2 in size and was made using the magic of imagination, stencils and spraypaint. Drop us a line if interested.

Comments Off on Somebody’s watching me

Lord of the Concrete Jungle (in situ)

We were commissioned by the Electric Social (who we’ve worked for before) and Tiger Beer to design a picture that would adorn a large wall upstairs at the Brixton bar/club. Once we had a design finalised we measured up and went off to buy some canvas. At this point I didn’t realise quite how bit a 5.5m x 2.6m canvas would actually be…

It’s always fun to go big but we almost bit of more than we can chew with this one as the canvas was far bigger than any room we had to work on it so we had to come up with some fun logistical fixes to get it all done. Just priming the huge canvas took long enough never mind painting the background and cutting stencils. Anyway it took a while longer than expected but we finally managed to get it finished and drop it by the club with a feeling of relief. I believe they had a tricky enough time mounting it and getting it up on the wall but I think that was only to be expected with this billboard sized monster. At least they liked it and first impressions from customers have apparently been good so, thankfully, that’s another job done.

No colour above plimsoll line – UPfest 2010

We have just got back from UPfest 2010 in Bristol and had a great time again this year. The weather was better, there were more people and the beer was flowing.

We had been busy with other things in the run up so didn’t have as much time as we would have liked for preparation. Truth be told we had a sub-standard design ready on Wednesday and then decided we really needed to come up with something else that we were both happy with. After shooting down just about as many ideas as we could come up with and become trapped with decision paralysis we finally managed to come up with the bare bones of an idea late on Wednesday evening…

After doing a little research on Bristol we came up with the fact that the Samuell Plimsoll who invented the Plimsoll Mark (which was designed to show the limit to which a ship could be loaded) was from Bristol. Hey Presto! – an idea formed and we’d have a plimsoll line above which no colour would be applied to the wall. The rest would consist of the most colourful background we could come up with, a fake CCTV screwed to the wall (which moved and had a red flashing light but was the bane of my life on the day as it obviously had a loose connection and you had to keep fiddling with it to get it moving!) and a big stencil of a slightly imperious looking siamese cat. The finishing touch would be a stencil of a miniature version of us applying our name stencil to the piece. We started out pretty promptly around 11ish with discobag playing to keep us amused. It was definitely nice to catch up with people and put some new faces to names. The road had to be cleared by 7pm so we finished for about then. All in all a great day out. We then followed up with some drinking, chit-chat and general tomfoolery before heading to the after-party bar for a final few drinks. Perhaps predictably we were the last on the dancefloor…

Below are the in-progress shots and a picture of the final piece. It’s definitely best viewed large and if you want to do that they are on our flickr here

Comments Off on No colour above plimsoll line – UPfest 2010