If we head back to December last year I was in Wuhan for secret reasons of my own when I had a chance to meet a gentleman we shall simply call ‘Simon’. Simon was a-coughing and a-spluttering and had a bit of a temperature and he put it down to the blood orange he’d had that morning. Thinking back now I’m pretty sure he was lying to me and was, in fact, patient zero and patently hadn’t just been eating oranges. He said he was just looking after the injured bat in his left hand…

Anyway, since I’ve had a few hours at home on my own I thought I’d put together this photofit. Over to you internet. You’ll have him worked out in no time…

Comments Off on Patient Zero

Hmmm… What can I say about this picture that it doesn’t already say for itself. I could try and describe my motivation but fear it would probably end up sounding like something from Reader’s Wives. Oh well, perhaps the following will fly…

The phrase comes courtesy of an overheard conversation whilst on a bus. I couldn’t tell you who had such overt desire or towards whom it was directed but I just couldn’t get the phrase out of my head. To cut a long imaginary story short I had a dream that night where loads of hands were grabbing me, much like when Sarah falls down the oubliette in 1986 musical fantasy film ‘Labyrinth’, but of course in my dream, it wasn’t quite as PG.

After waking with the half-forgotten dream quickly evaporating from my mind I jumped on to the nearest canvas to try to reclaim some of my increasingly slippery thoughts. You may wonder why. But personally I’d like to think ‘Why not?’

It is on a 1×1 m canvas and made using the magic of imagination, acrylic, spray paint and charcoal.

Comments Off on Overtly sexual desire

There I was rooting around in all the art stuff that we have collected over the years when I come across a device that I just didn’t have a clue what it was or what it even could be. After a little interweb research I came to the conclusion that it was a ruling pen. Now i’m really not sure where we picked this up but i have to say i kind of like it as it does give a really good straight line.

Sadly that’s not what i used it for though, instead i just started writing my name and making a mess, that’s when my housemate came along and started doing exactly the same. Anyway there i was a few days later leafing through my sketch book when i see this page and thought i’d draw a little face amongst all the mess.

Title: The sketchier side

Comments Off on The sketchier side 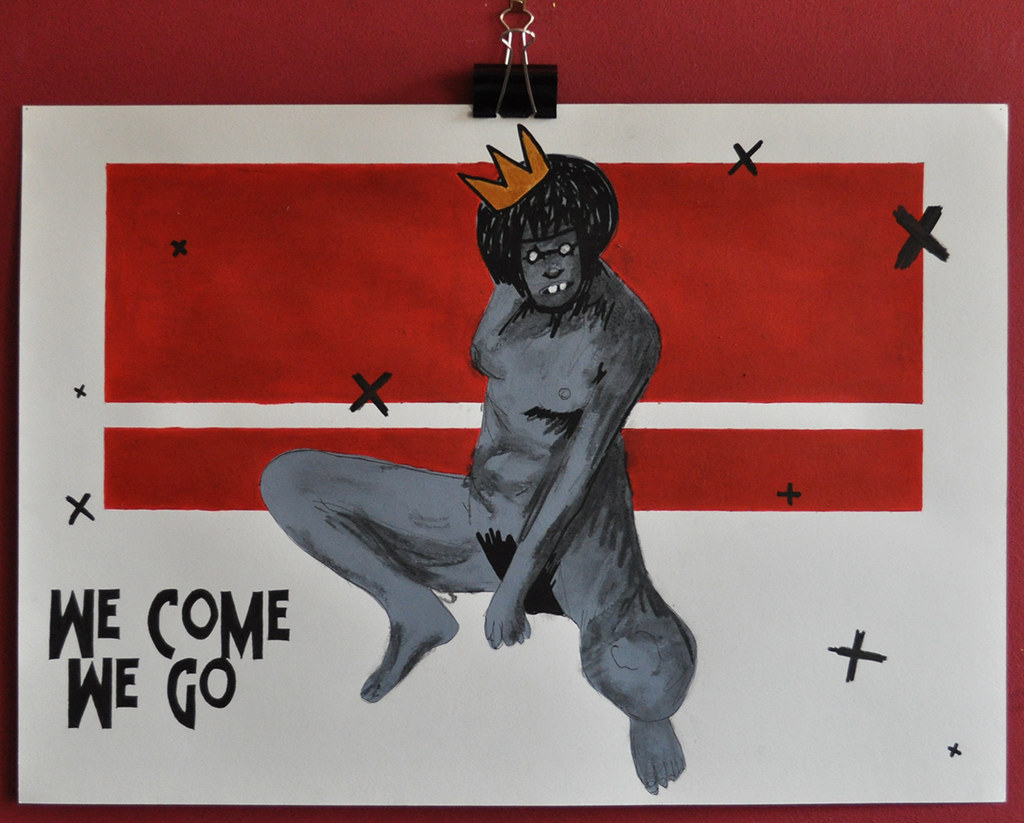 We all only have one life to live so you might as well live it to its fullest, take every day as your last and all that malarkey and this beauty is doing just that. Her parents always told her to put her clothes back on when she was a child but she just didn’t care she was going to do as she wished and even now as someone more advanced in age she’s still up to her old tricks. Admittedly this doesn’t always go down to well at parties but then again who cares, certainly not her that’s for sure.

Comments Off on We Come, We Go