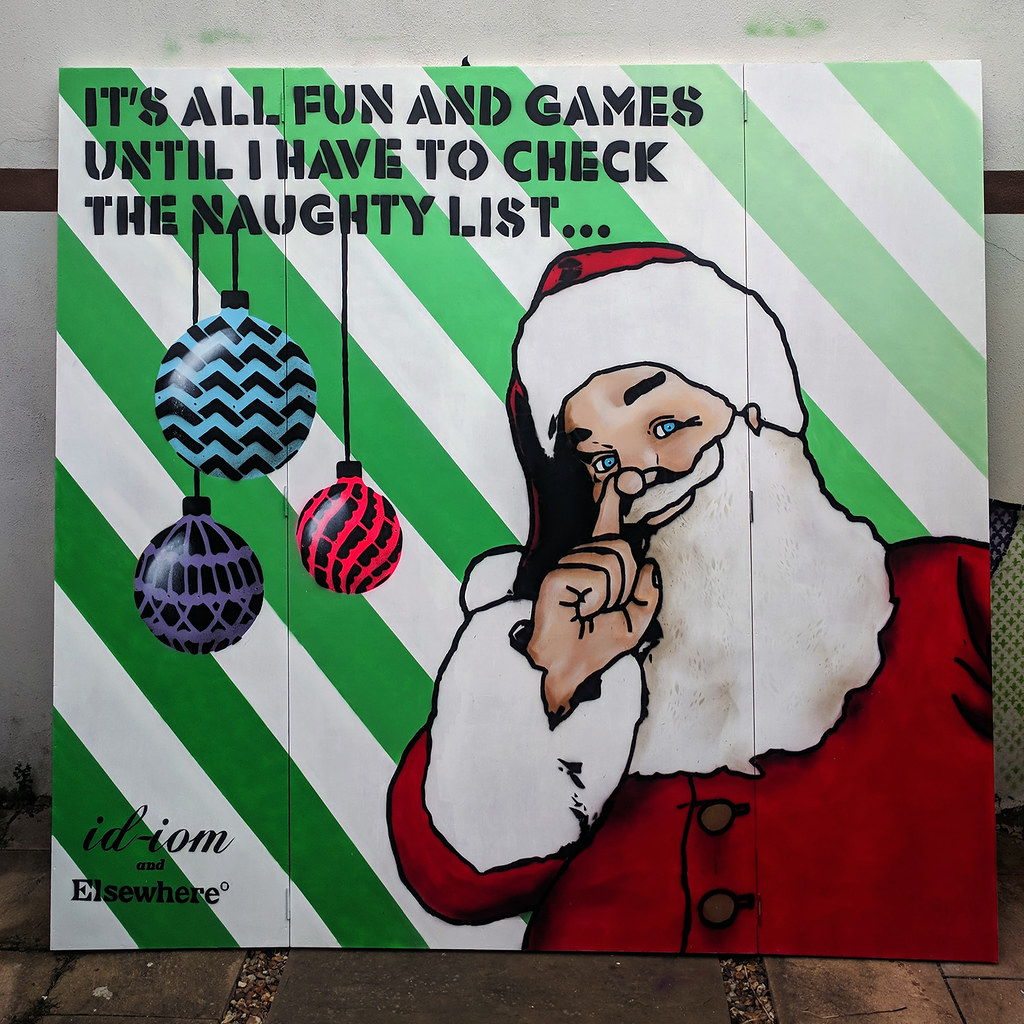 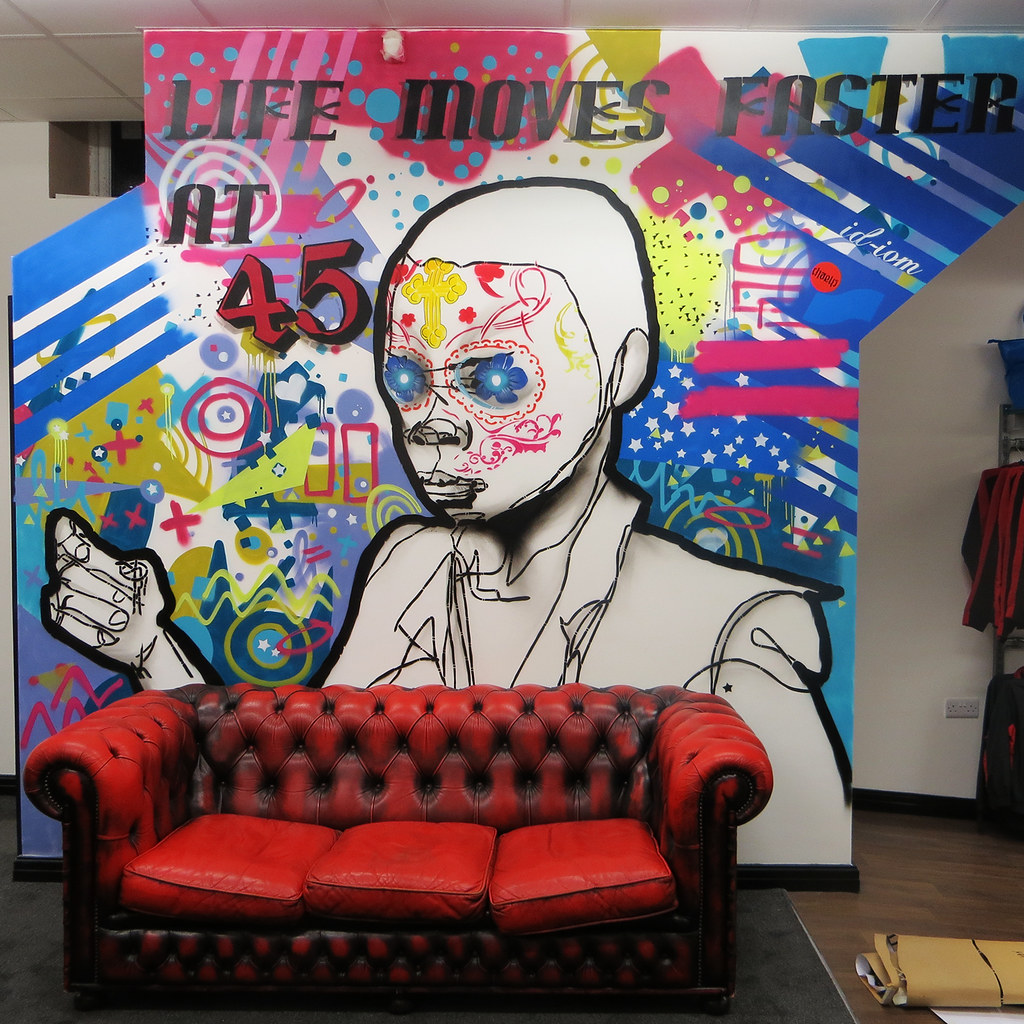 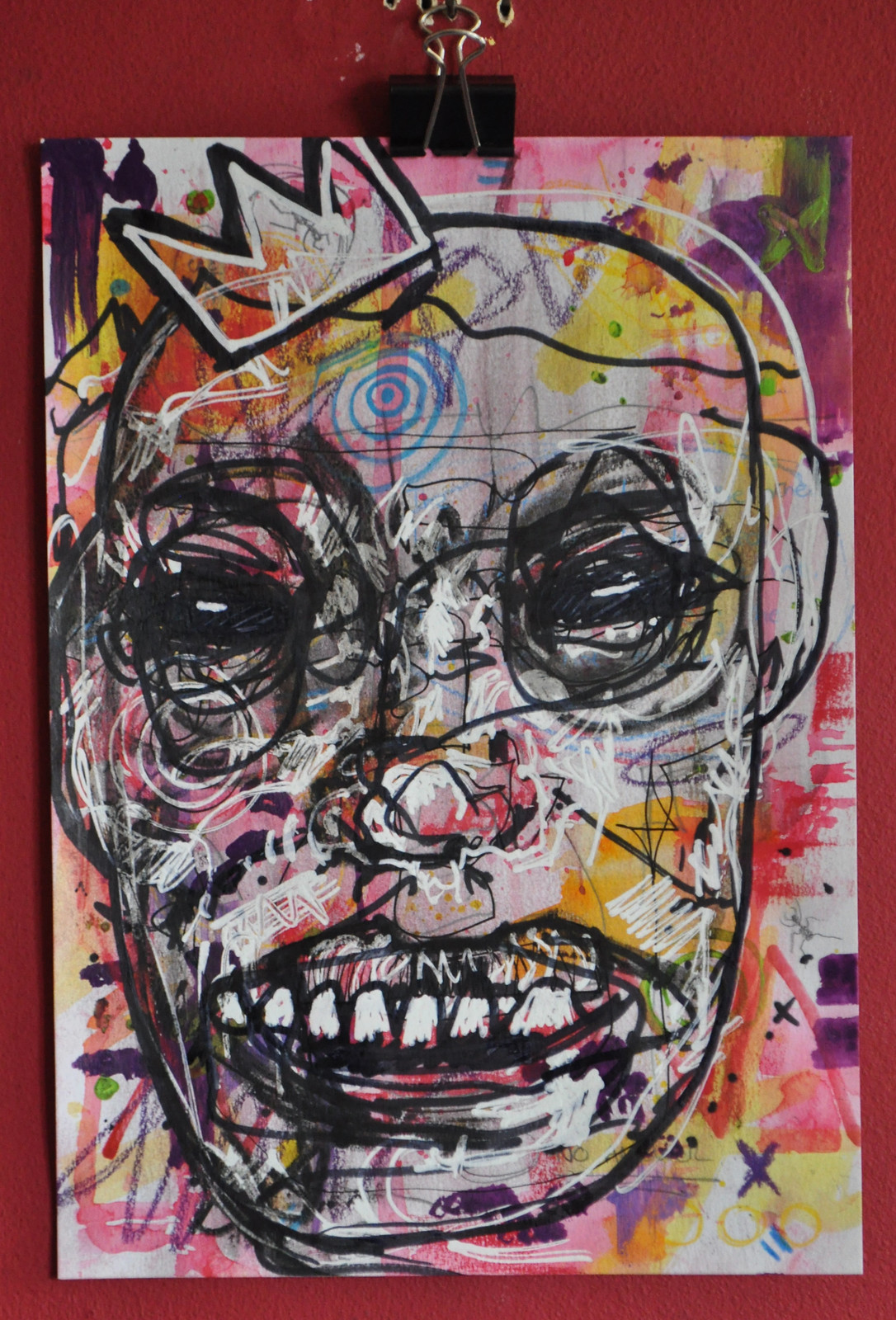 I think there should be a jolly festive song called ‘The Christmas skull’. I have done a cursory bit of internet research and it would appear that no errant songsmith has managed to come to my aid as of yet. We live in hope. This piece was actually drawn on Christmas morning last year whilst recovering from the shenanigans of the previous evening (which included losing a dog that wasn’t ours) and waiting for a lift up to my auntie’s for Christmas Day. The picture isn’t very pretty but then again neither was I at the time. I felt defeated but still in charge. Like a king whose lost a battle but is still around to try and make amends. I think a combination of hangover and sleep deprivation was probably just kicking in at that point though…

Comments Off on The Christmas Skull

Time to up the id-iomedication

As the festive period creeps ever closer its time to up the medication in anticipation of an endless stream of saccharine sweet Christmas adverts on TV and tunes playing in every shop. Not only that but having to face the indignity of having to actually enter just about every shop hunting for predictably underwhelming presents. And, of course, the inevitable mince pies (OK I do actually like mince pies but i have an unusual addiction). With all this going on I need to keep myself medicated just to survive. The lights on the tree are enough to make me flashback to nights out I was hoping I had forgotten…

Now, however your troubles are over as you can now take some id-iom certified yuletide survival pills for all those tricky times. No need to wallow in your own misery at this time of year ever again. Just pop one of the pills into your mouth with a glass of water and – bingo –  you’re good to go! Just be careful not to take all three at once, I did once and it was a somewhat messy situation…

Comments Off on Time to up the id-iomedication

This picture was painted on the run up to Christmas where we are inundated with strange & nonsensical perfume and supermarket ad’s, there’s Christmas songs playing non-stop and I also heard some carol singers (I actually quite like carol singers and they are one of the things i enjoy about Christmas). It’s meant to be Spring time now and this post is still accompanied by freezing conditions and high winds. What other time of year could it possibly be? To throw our Springtime hat into the ring we bring you ‘Dead Bad Shot’. It features a lot of red. Like roses. And blood. 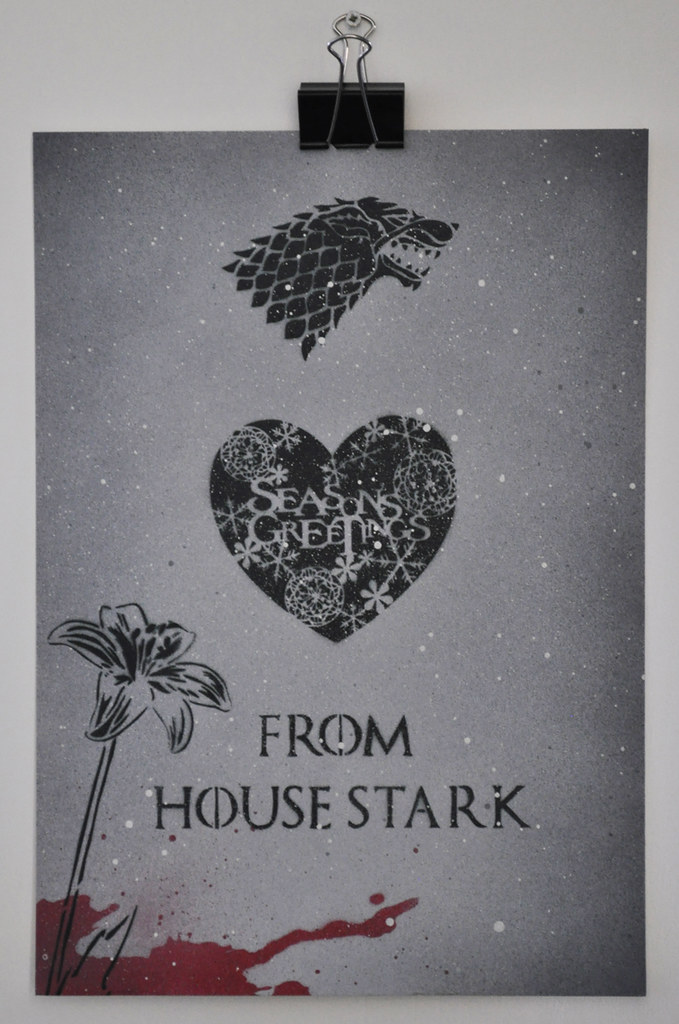 Winter is coming! Fancy popping over to Winterfell for a spot of dinner?

Can you guess who’s just been watching the first two seasons of Game of Thrones? This piece started out as something completely different and somehow morphed into a Christmas card from The House of Stark. I think there’s something a little ominous about it, a bit like it is warning of things to come. I realise it’s a bit late for Christmas but with season 3 on the way it still seems quite fitting.

She’s A3 in size and has been completed using the mediaeval magic of spraypaint and stencils. Signed on reverse.

Comments Off on Winter is coming! 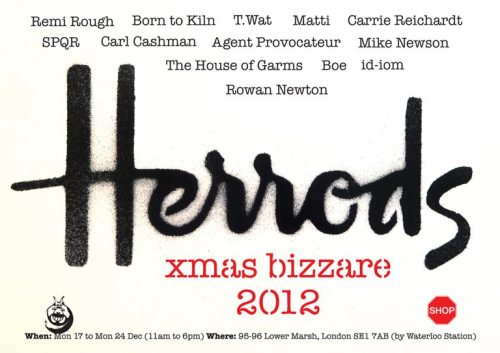 Now Herod wasn’t the nicest person who’s ever lived but that doesn’t mean the people involved in this little pop up shop are the same, in fact quite the opposite. From Herrod himself:

We’re not only stocking fine contemptorary art, porcelain with a twist, but there’s also an exclusive selection of retro garments nestled in one corner. We think it’s possibly a one-stop-chrimbo-present-buyin-shop… but then we are biased (and delusional). 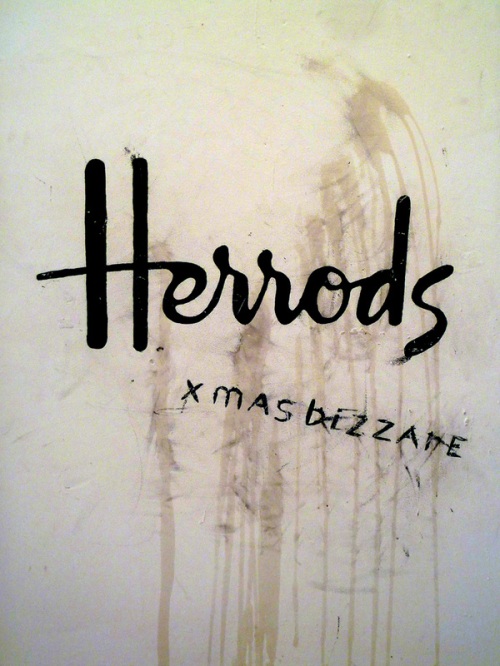 If your in the area i would definitely suggest popping in. I was down there the other day setting up and saw some absolutely fantastic pieces from the likes of Rowan Newton, Carl Cashaman, Remi Rough, SPQR and Agent Provocateur to name a few. Oh and us as well!!! 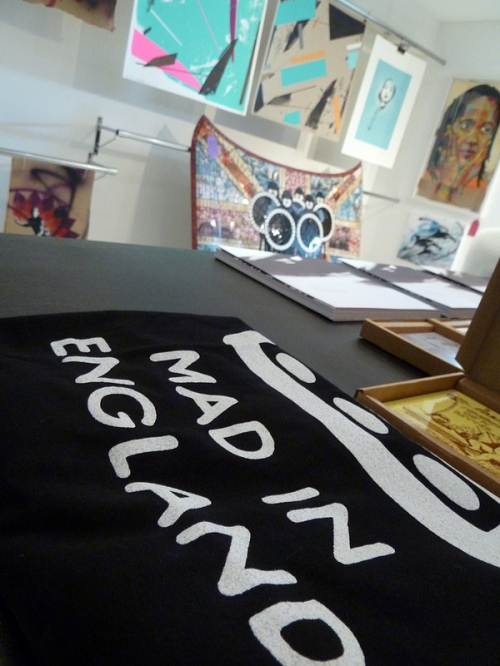 The pop up shop is only open for this week can be found near Waterloo station at:

Last Christmas I gave you my heart. This year to save me from tears i’m putting it all on Ebay.

I’ve been dashing through the snow all day just to deliver some more pieces for the id-iom Yuletide Demolition sale and they’re all starting at the austerity busting price of just 99p.

This picture shows Manx freedom fighter ‘Stumpy Quayle’ in a victorious pose after winning the Manx annual hipster hunt. Not one to be easily troubled he’s ruff, rugged and always spoiling for a fight. It’s made using stencils and watercolour with the added touch of glitter on A2 paper. Signed on reverse. Here’s the Ebay link.

The internet made me do it

If you listen to the internet all day only bad things will happen. You have been warned! This little beauty has been created using the magic of stencils and spraypaint and it’s on A3 card. Signed on reverse. Here’s the Ebay link.

I was reading something about ancient maps and how they would put something along the lines of ‘Here be Dragons’ (or maybe something like ‘Here be lions’) on unknown or unexplored areas so thought i’d come up with something inspired by that. I think it’s about 13 colour using about 9 stencils on A3 paper. Aren’t i clever? Signed on reverse. Here’s the Ebay link.

Comments Off on Last Christmas I gave you my heart. This year to save me from tears i’m putting it all on Ebay.

A word of advice thinking about you will blow your mind

Today we have three more stocking fillers for you from the depths of the studio which will hopefully brighten anyone’s Christmas spirit. 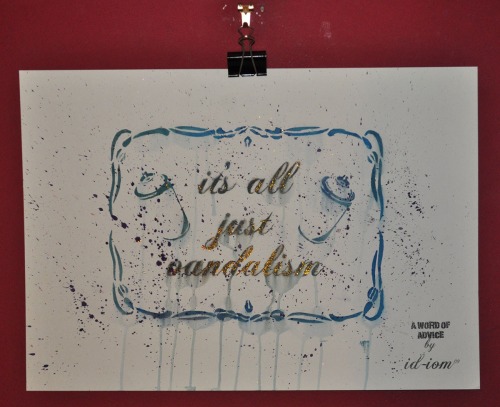 Firstly we have ‘A word of advice’ which features the text ‘it’s all just vandalism’ and what a truism that is. It’s A2 in size and consists of a stencil of the words its all just vandalism in watercolour with unique hand finishing including glitter which you can just see in the picture. Here is the Ebay Link 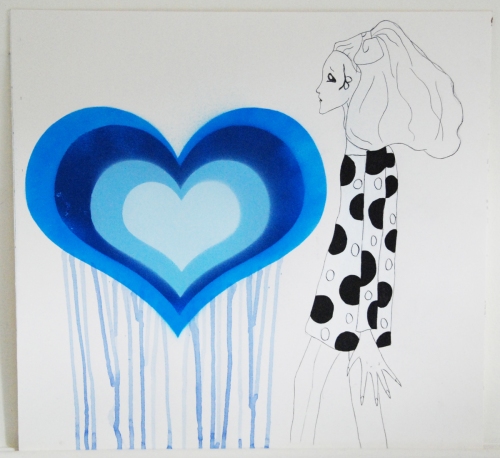 Secondly we have ‘Thinking about you’ which shows a melancholy looking woman staring at a collection of cold blue hearts. It is winter after all!! The picture is 42 x 45 cm in size and is made using hand-cut stencils, spray paint, ink and marker pen. Here is the Ebay Link

Finally we have ‘Blow your Mind’. It features a man crawling along the floor with his mind blown away in a psychedelic mess. It’s A3 in size and consists of a stencil with unique hand finishing including acrylic and watercolour. Here is the Ebay Link

I hope that warms your cockles!!

So a few more pictures are for sale in id-iom’s Yuletide Fundom Demolition Sale! 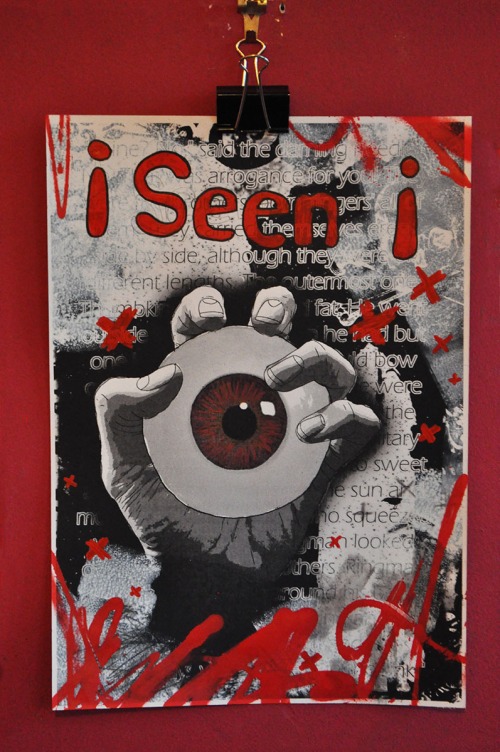 The first called ‘I Seen I’ and features a disembodied hand holding an eyeball  with a moody red iris. Now what’s more Yuletide than that i ask you?

It’s a single layer screen print on A3 with hand finishing touches and is signed on reverse. It’s starting at 99p and here’s the Ebay Link 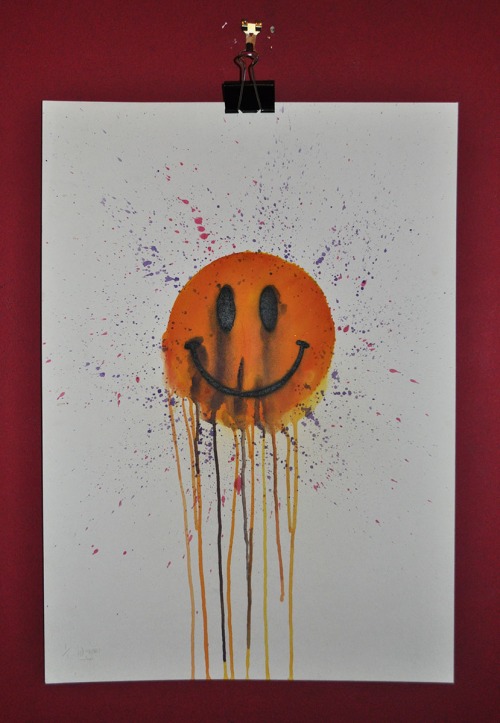 The second is called Smile! and consists of a big smiley face giving you a big cheesy. This picture is A2 in size and uses watercolours with stencils to create washed out effect. Its starting at 99p also and here’s the Ebay Link