Sometimes things go your way and sometimes they don’t. For Maggie here it’s definitely the latter. There she was watching Netflix late one night when she came across a dead pixel on her screen – or at least that’s what she thought it was.

After some intense experimental use of ayahuasca, however, Maggie now believes some parts of her face are teleported to the void and vice versa. She never knows when it’s going to happen but it’s always inconvenient. Missing parts of films at the cinema or conversations with potential suitors. It’s all rather embarrassing really.

I can attest to this because just as she was about to sit for her portrait for me some white shadowless void spots appeared on/in her face and stayed there until I’d finished. It really was very strange..

She’s on the finest a3 bockingford paper and has been lovingly handmade using the magic of acrylic and watercolour. If you’d like Maggie and the void for your wall just drop us a line.

Comments Off on The dead pixel

Man in the mirror

Things have been getting a little weird since lockdown. The intense boredom and general anxiety mix together in some odd combinations. In order to combat this I thought a self-portrait may be in order. I was wrong.

Looking at the paper in front of me I saw myself staring back or at least some facsimile of me – but things just weren’t quite right. The head too elongated, the nose too small but the dead, lifeless eyes I seemed to have got just right.

Then I realised it wasn’t really me but that unflinching dolt High Risk Hugo. A stain on society if ever I saw one. A man who on his good days was more like Chuck Norris on flakka trying to chat up your girlfriend but on his bad days the social equivalent of someone slipping a dead slug in your mouth and holding it shut.

I’ll not be doing another selfie anytime soon. We don’t need to let that particular cat out of the bag…

Comments Off on Man in the mirror 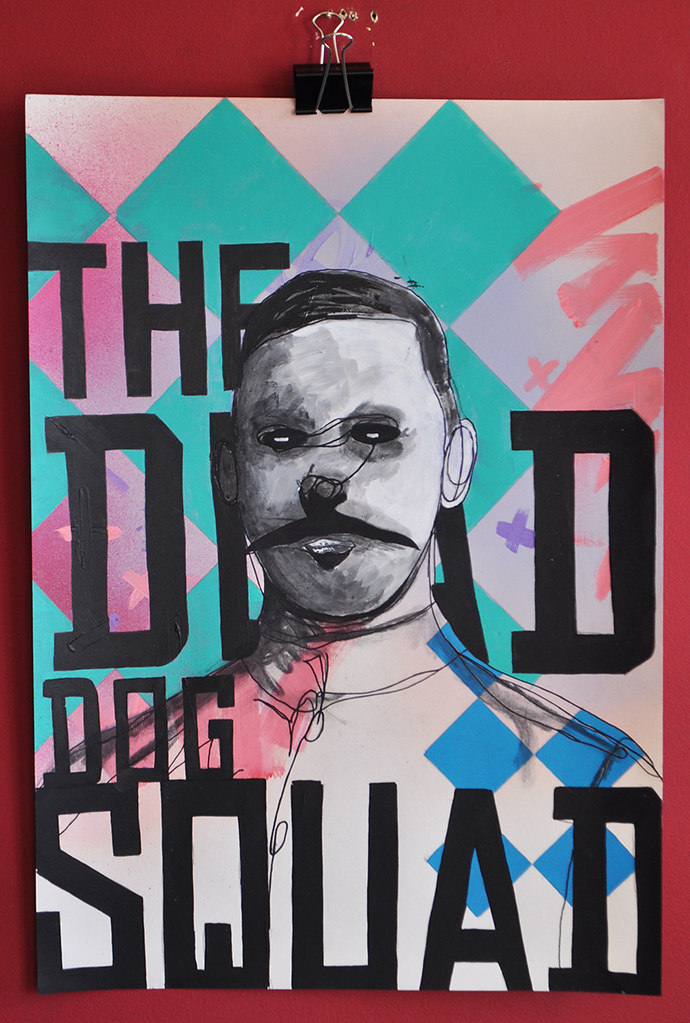 This picture was painted on the run up to Christmas where we are inundated with strange & nonsensical perfume and supermarket ad’s, there’s Christmas songs playing non-stop and I also heard some carol singers (I actually quite like carol singers and they are one of the things i enjoy about Christmas). It’s meant to be Spring time now and this post is still accompanied by freezing conditions and high winds. What other time of year could it possibly be? To throw our Springtime hat into the ring we bring you ‘Dead Bad Shot’. It features a lot of red. Like roses. And blood.

F*@k this for a game of soldiers

War! What is it good for? Absolutely nothing! Say it again! – so sang Edwin Starr in 1970 on the anti-Vietnam song ‘War’ (which, i was interested to learn was originally recorded by The Temptations but not released as they didn’t want to alienate their more conservative fans). Whilst i have a lot of respect for our armed forces and the work they do it is generally political forces which dictate what they do and when – and this can sometimes lead to questionable decisions being made regarding their deployment. That’s all i really want to say on the issue as i think this piece largely speaks for itself…

Title: F*@k this for a game of soldiers

Available from our Big Cartel store for £150

Comments Off on F*@k this for a game of soldiers