In love as in death

Skull with lillies, acrylic paint on A3 paper, available on Big Cartel

Comments Off on In love as in death

It’s not a dove

‘It’s not a dove, so don’t forget it, it’s just an aspirin with a bird scratched on’ (sung to 10cc’s ‘I’m not in love’). It was all Doona could do was to repeat the line over and over again to try and quell the anxiety storming around her brain. She had just dropped her first ecstasy tablet and she wasn’t sure exactly what was going to happen to her. She’d read everything she could on the interweb and spoken with friends but she knew the actual experience she was going to have would be tricky to verbalise. Suddenly the first bars of The Streets ‘Blinded By The Lights’ were dropped by the DJ and she began to float…

Created using the magic of acrylic, oil pastel, paint pen and imagination on classy A2 Bockingford paper. Get in touch if you’d like to give her a new home…

Comments Off on It’s not a dove

Your guess is as good as mine…

Well, there’s a reason not to leave stencils in the ‘studio’. I’m not even entirely sure what’s happened to it. Other than it’s dead.

Comments Off on Your guess is as good as mine…

Tagged as death, memo to self, oops, ruined, stencil 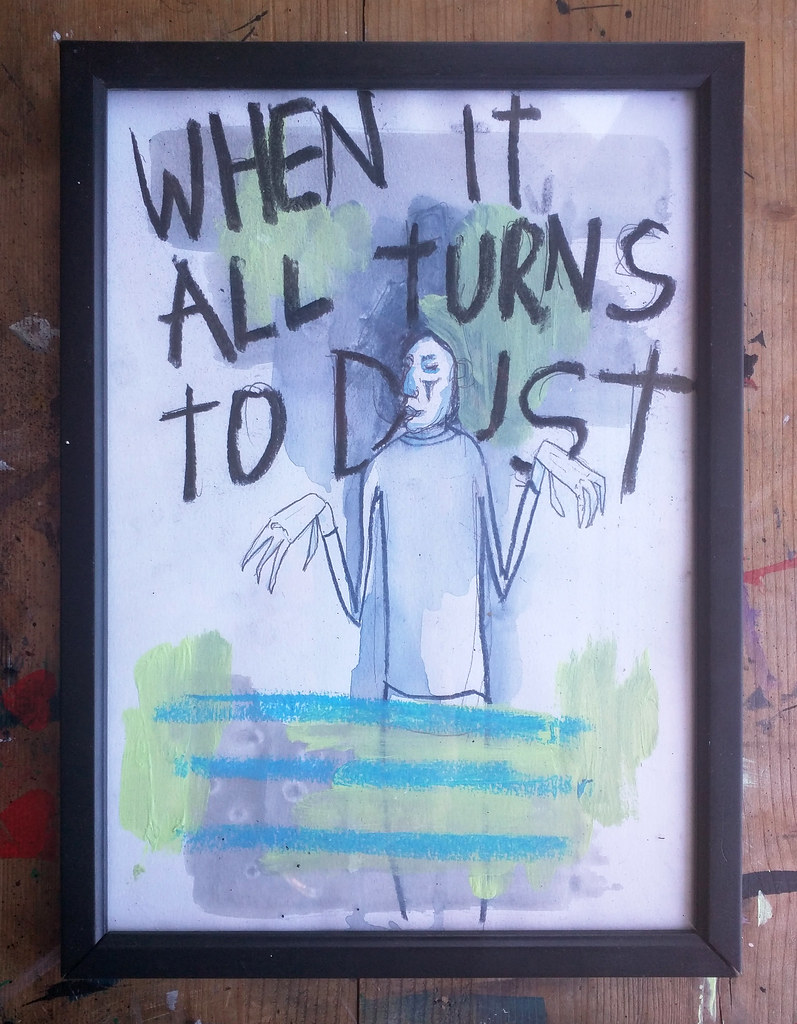 Hmmmm. How to explain Stormbird. I’m not really sure if any explanation I can give can adequately describe our thought processes when creating this stop-motion epic. The ‘storyline’ just kind of suggested itself. It’s probably easier to explain it’s conception than how we developed such a monster. It came about when we had id-iom’s good friend Dave over from LA for a while. He’s known for doing a bit of video production/editing so after consumption of a few beers down at the studio we (stupidly) decided that a short stop-motion video might be a good idea. It wasn’t. After over 2600 shots over the best part of a week in the freezing cold basement making just one tiny adjustment after another we were close to death by exposure but were finally able to call it a wrap.

There is plenty of footage which ended up on the cutting room floor that will hopefully never see the light of day as it’s more than a little weird and would probably emotionally scar any viewer for life. And all that took long hours of standing around in the cold that i’ll never get back. I bet the Aardman animation studios are all cosy and warm. If i’m ever to attempt anything like this again I’ll be making sure it’s warm outside or we have such mod cons as central heating…

Anyway, once principal photography was finished we realised we needed some musical accompaniment befitting of such a creation so we put out the call and came up with 3 very different soundtracks. The first version will probably not play in certain countries on youtube as The Man probably has certain copyright issues as it features tracks that are already out there but that’s where our other versions come in as both feature an original score which should play internationally no problem. The other video’s will follow this in short order and we’d really love some feedback on which one people prefer (so watch this space)…

What else can we say about the video apart from the fact that it features anthropomorphic spray cans, the Graffiti Removal Squad (first featured here), sharks (one of which is gay but we had a hard time portraying that!), Tom Selleck (although I like to think he’s in his Thomas Magnum persona), a fireball (from Streetfigher 2 obviously) and, of course, the plucky little robin a.k.a the storm bird in Norse mythology.

Finally, whilst I like to think our video has a certain naive rustic charm there are those who treat the subject with a little more professionalism. So for those who haven’t seen it here’s a little link to a much more polished creation featuring light stencils by our good man Pahnl.

F*@k this for a game of soldiers

War! What is it good for? Absolutely nothing! Say it again! – so sang Edwin Starr in 1970 on the anti-Vietnam song ‘War’ (which, i was interested to learn was originally recorded by The Temptations but not released as they didn’t want to alienate their more conservative fans). Whilst i have a lot of respect for our armed forces and the work they do it is generally political forces which dictate what they do and when – and this can sometimes lead to questionable decisions being made regarding their deployment. That’s all i really want to say on the issue as i think this piece largely speaks for itself…

Title: F*@k this for a game of soldiers

Available from our Big Cartel store for £150

Comments Off on F*@k this for a game of soldiers

You can trust me. I’m a police officer…

Having just read the oh-so-scandalous news that the policeman who pushed over Ian Tomlinson during the G20 riots will not face charges over his death I thought it a good time to put forward a couple of bits of our work which reflect my current feelings on the matter. The fact that he is an ‘elite‘ officer apparently trained for public order containment should surely stand for something but obviously not. No wonder this hardly makes me feel safer…

For Police Use Only