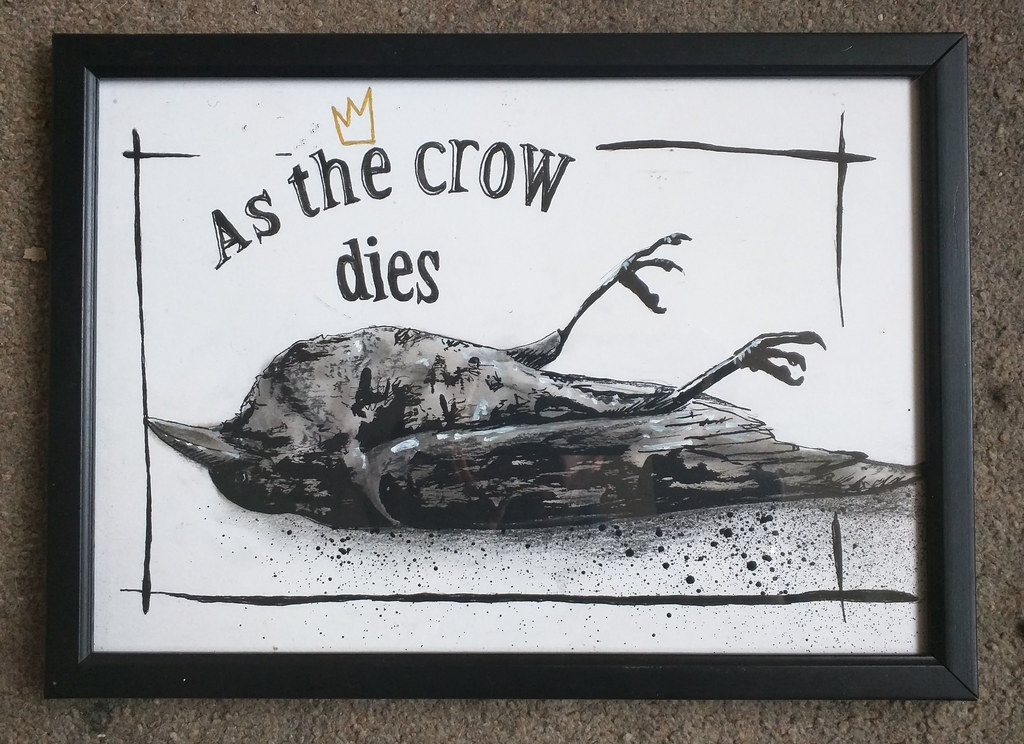 The years had  passed slowly since the dark times at the Feast of McDonald’s. The war with the gulls was now over – with untold casualties on both sides – but the realm as a whole had survived and had now seen peace for a good while under his rule. Seismic changes were already in motion though as the King of the Corvidae had cawed for the very last time. The gears of war were turning once more. The corvidae needed to appoint a new king who could shoulder the mighty burden set before him.

For most the only real potential successor was Belasko. He had proved his mettle many times before both in battle and in diplomacy but he was getting on a little in age. The majority of his potential subjects didn’t really consider this a problem but he was deeply worried about his suitability for the role. He was a soldier, not a leader, as he kept telling himself and the many worried councillors that were scurrying around him but the more he brought this point up the more eveyone got excited.

He knew in his heart that the Corvidae required another type of leader, one that was not drenched in blood and tied to the past like himself. At the same time he realised the tide of history may just carry him along regardless. This would require some machavellian dexterity he wasn’t sure he still possessed. He would certainly have to ruffle some feathers and didn’t have much time to lose but he had been in this game long enough to know that if he played his cards just right he might just be able to select the right bird for the job…

If you like this then you’ll be glad to know we’ve got previous in the world of crow related art. It is, in fact, a sequel to an earlier piece called King of the Corvidae.

Comments Off on As the crow dies…

War! What is it good for? Absolutely nothing! Say it again! – so sang Edwin Starr in 1970 on the anti-Vietnam song ‘War’ (which, i was interested to learn was originally recorded by The Temptations but not released as they didn’t want to alienate their more conservative fans). Today’s piece is something of homage to the pointlessness of war and was inspired by the poem ‘Futility’ by Wilfred Owen which is about life and death in the trenches of France during World War One and the futility of the whole situation. Hopefully our piece reflects at least an echo of that sentiment.

Righto, that’s enough highfalutin seriousness for today. We’ll hopefully be back to our usual broadcast of gibberish tomorrow…

Comments Off on Futility

This picture was done as a gift for a good friend. Wanna hear the story that inspired it?? Well, here it goes:

There I was with Old Ben just having a quiet drink in a scruffy South London boozer and minding my business when some foreign tough nut walks past and manages to knock the drink out of my hand. After saying something to me i couldn’t understand (I couldn’t even work out what language he was speaking) the man he was with comes over and says that his friend doesn’t like me. And that he doesn’t like me either.

I’m sure they were chatting nonsense but this guy reckons they were wanted men who were not to be trifled with so i promised him i’d be more careful. But that wasn’t enough and he has to go and escalate the situation by shouting  death threats at me. At this point Old Ben steps in and tries to chill the situation by saying i’m not worth bothering with – but that isn’t enough for Mr Tough Guy. Realising what is going to happen next i try to move carefully back as things are just about to turn ugly. The rest, as they say, is history…

Comments Off on Old Ben strikes back

The Ting Tings must die!

I have actually been to see the Ting Tings and they weren’t as bad as all that. In fact i’m probably being a little harsh saying they must die but it makes for a good headline. The poster I got for a couple of quid and the fun i had defacing it – priceless. Anyway if i can find it again this little puppy may well find her way onto the streets…

Comments Off on The Ting Tings must die!