An ode to Highgate

‘Life moves pretty fast. If you don’t stop and look around once in a while, you could miss it’. So spoke the eponymous hero in 1986’s Ferris Bueller’s Day Off.  I was in North London on something of a busman’s holiday and decided this was solid advice worth heeding so headed out to do some ‘research’ into Highgate. It somehow yielded this result.

Some interesting facts about Highgate; St Michael’s Church (pictured) is the highest church in London and as you enter the church you are all but level with the cross on the top of St Paul’s Cathedral, there’s literally tons of famous people buried in Highgate Cemetery from Karl Marx and George Michael to Jeremy Beadle and Alexander Litvinchenko, the 18th century farcical oath of ‘Swearing on the Horns’ was traditionally given to visitors at Highgate pubs. If you don’t know about ‘Swearing on the Horns’ you really should check it out…

To celebrate these facts and Highgate in general I’ve produced this image. I think that’s the best explanation I can come up with for its existence. It would be good to have a proper use for it. I should probably get on with some real work…

Comments Off on An ode to Highgate

Windmills have been around for thousands of years in one form or another but they’re not a particularly common sight nowadays. Brixton however has London’s only working windmill. It’s tucked away near the prison overlooking an estate. Originally it would have milled local flour, been surrounded by fields and been the best place to catch the prevailing wind. I know because I’ve had the guided tour.

To celebrate this hidden little gem and Brixton in general I’ve produced this image. I think that’s the best explanation I can come up with for its existence. It would be good to have a proper use for it. I should probably get on with some real work…

Comments Off on Brixton windmill 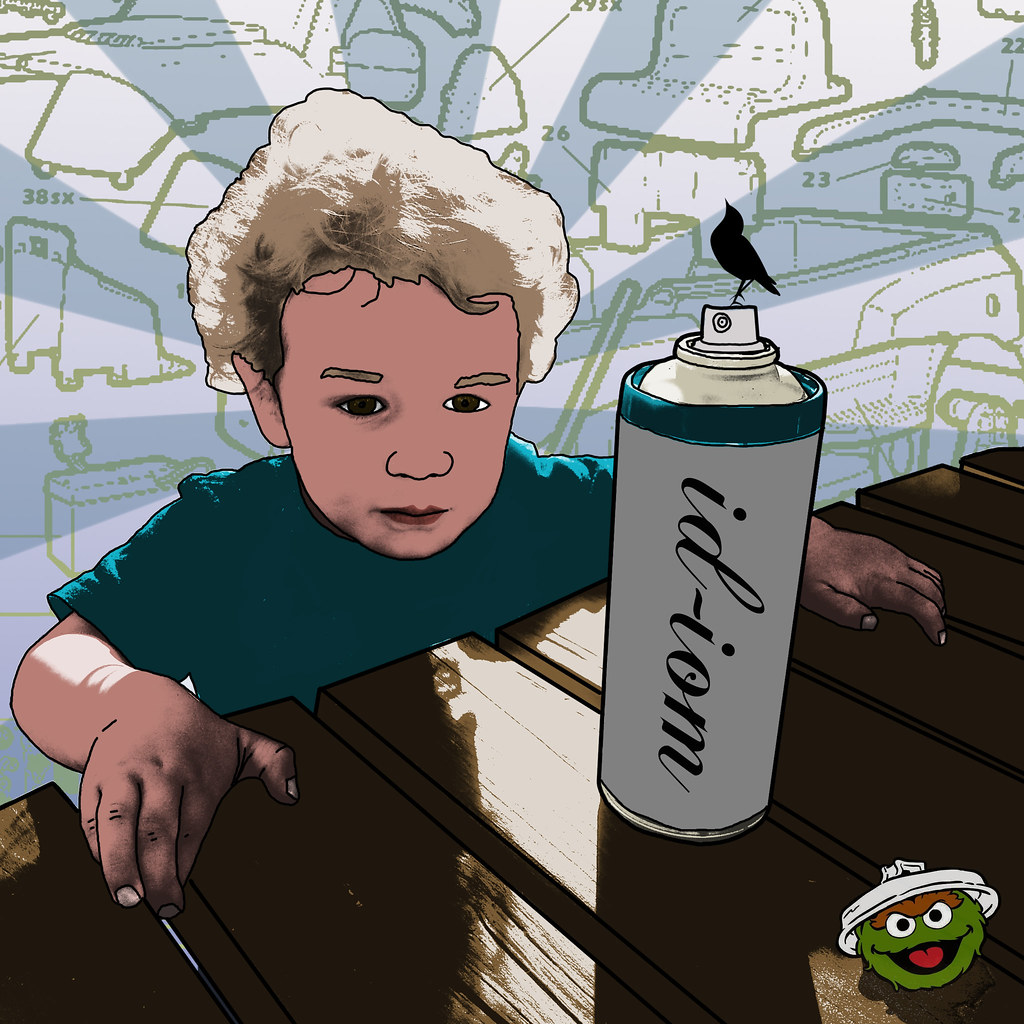 In my experience it’s good to start them young. Hopefully this young whippersnapper will grow up to have some amazing can control if he’s starting out this young. The image is based on a photo I found on my phone of a friend’s kid looking longingly at the can of paint that I’d put on the table just within his grasp. The next shot I’ve got shows him playing with it (and don’t worry it didn’t actually have a cap on. I have added that for dramatic effect which I’m allowed to do as it’s my picture) but this is the one I like when he’s got that look of concentration like he’s working out what to do next…

Comments Off on Start ’em young

The Old Man of PR knows everything…

Since moving to London many moons ago we seem to accumulated a disproportionately large stable of PR friends. Now i’m not certainly not knocking them as I love them all and they have come in handy on more than one occasion but i’m just not entirely sure why this has come to pass or what it says about us ! Anyway, i digress…

We were commissioned by one of our friends who works for Six PR to create an image  that was to be printed as an A1 poster for her office wall. It was to be PR related and had to feature the Six PR logo. That was pretty much as far as the design brief went. From there on in we just did as we wanted…

The background features the CV of the person who commissioned it turned into binary code and the Old Man has the Six PR logo for his shining left PR powerblast eye. There are also 6 sixes in different colours in the background to really drive home the Six PR point and that’s pretty much job done. I’m sure that makes it sound like it was less work than it was but coming up with the plan is always the toughest part.

The most annoying thing with this project was trying to remember throughout that the poster was going to be printed up at A1 and so the file had to fairly massive to ensure the image didn’t pixellate at all. At least we got there in the end.

Go to our flickr page here for a larger version of the image.

Comments Off on The Old Man of PR knows everything…