It’s not a dove

‘It’s not a dove, so don’t forget it, it’s just an aspirin with a bird scratched on’ (sung to 10cc’s ‘I’m not in love’). It was all Doona could do was to repeat the line over and over again to try and quell the anxiety storming around her brain. She had just dropped her first ecstasy tablet and she wasn’t sure exactly what was going to happen to her. She’d read everything she could on the interweb and spoken with friends but she knew the actual experience she was going to have would be tricky to verbalise. Suddenly the first bars of The Streets ‘Blinded By The Lights’ were dropped by the DJ and she began to float…

Created using the magic of acrylic, oil pastel, paint pen and imagination on classy A2 Bockingford paper. Get in touch if you’d like to give her a new home…

Comments Off on It’s not a dove

Today on eBay we’ve got ‘Ecstasy and me’. You can check it on the link below:

I’m in two minds over this pic. I can’t decide whether she looks like she’s been on the disco biscuits all night and is gurning like a donkey sucking a rolo or whether she has been having a little too much fun with some kind of intimate solo pursuit. Either way ecstasy figures in her immediate future in one way or another. Probably best just to leave her to it.

For no better reason than we can this was reimagined from actual news headlines. I fill my head with this grubby nonsense so you don’t have to. Vive la revolution!

Title: Ecstasy and me
Materials: Paint pen, acrylic and charcoal
Size: A4

Comments Off on Ecstasy and me 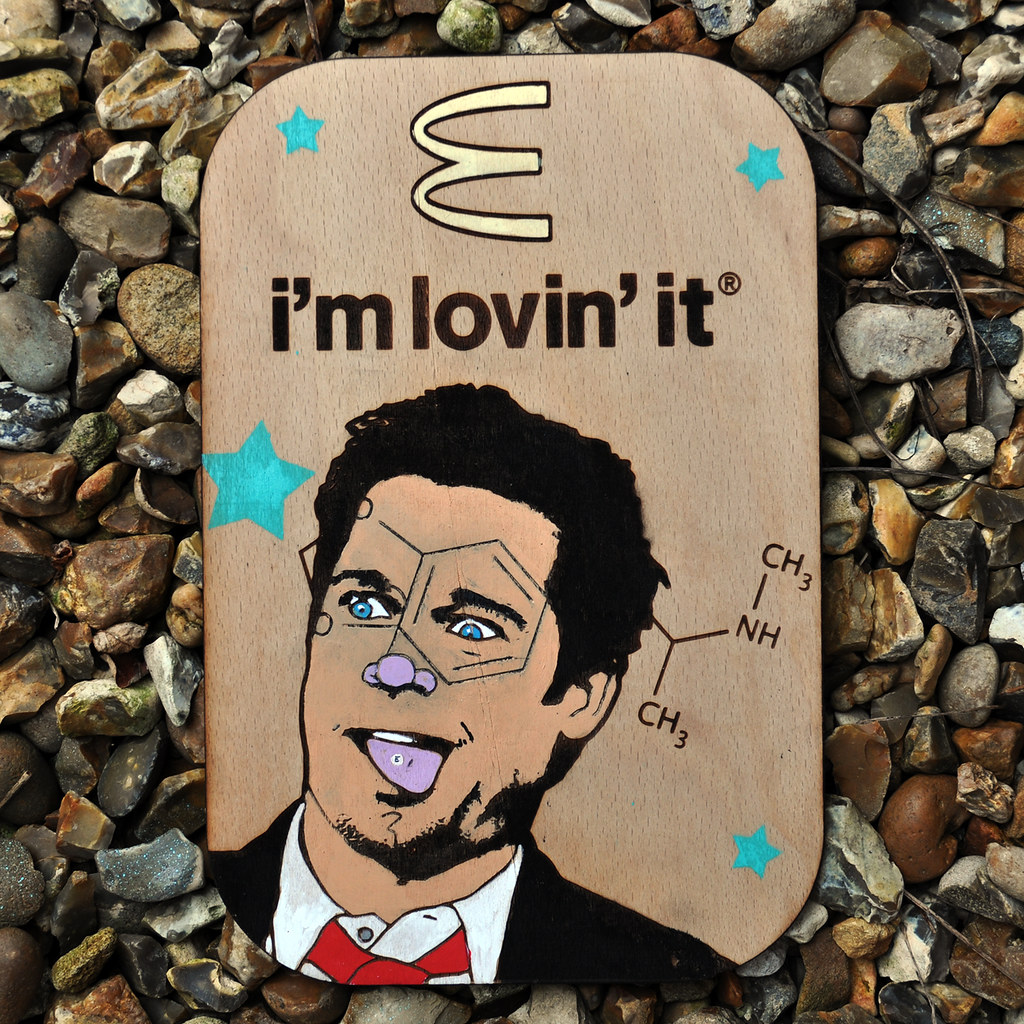 “There’s a guy in the place who’s got a bittersweet face. And he goes by the name of Ebeneezer Goode” sang The Shamen in their 1992 No.1 hit ‘Ebeneezeer Goode’. There was much controversy at the time about whether or not the song was endorsing recreational drug use. Which it obviously was. It hardly takes a genius to work that one out. Anyway, you may wonder what that has to do with today’s piece. Not much directly but it does allow me to segue nicely into the world of MDMA, Ecstasy, madman, X or Mandy. Call it what you will. Back in the late 90’s London’s club scene was buzzing with places like Turnmills, The Cross, The End and Fabric (to name but a few) having wildly successful evenings week after week. You’d only have to venture into one of those booming dens of iniquity to witness a large percentage of the crowd looking decidedly happy, chatty and sweaty. Now I’m not endorsing anything but I had some good times in those places myself.

So today’s piece is a tribute to those good times, wherever you were at the time. I’ve got a few favourite touches on this piece – the googly eyes, the Mitsubishi sign overlaid on the club and the thread which overlays the stencil of the chemical composition of MDMA. Winner. Now, if anyone wants to save this from an uncertain life on the streets it’s time to speak up now…

BONUS FACT – When the Shamen appeared on Top of the Pops, it was expected that Mr.C would tone down the song due to its being broadcast. The group replaced the final lyric “Got any Salmon?” with “Has anyone got any underlay?” He was later asked about this in a radio interview, to which he replied that it was not a drug reference but a rug reference

Comments Off on Jack of Clubs I’m in two minds over this pic. I can’t decide whether she looks like she’s been on the disco biscuits all night and is gurning like a donkey sucking a rolo or whether she has been having a little too much fun with some kind of intimate solo pursuit. Either way ecstasy figures in her immediate future in one way or another. Probably best just to leave her to it.

Title: Ecstasy and me
Materials: Paint pen, acrylic and charcoal
Size: A4

Comments Off on Ecstasy and me