Sleeping with the fishes

Who here doesn’t like an idiom? We certainly do. We haven’t painted one for a while so have decided to rectify that with ‘Sleeping with the fishes’. It’s unclear what led Tony 2 Chains to end up in this position but it’s clear he’s been here a while as there appears to be an octopus living in his brain cavity. It must have been bad though as they appear to have stapled his lips together. Harsh.

I’m pretty sure everyone is down with ‘sleeping with the fishes’ but if you’re unfamiliar with the idiom it’s an old school gangster cliche which means to be killed and have one’s body disposed of in a sea or other body of water. Apparently the earliest recorded use was in 1833 but the phrase was popularised by the 1972 film The Godfather. Mario Puzo’s 1969 book on which the film was based doesn’t actually contain the phrase but there is reference to a large dead fish wrapped in a bulletproof vest to signify the same thing, although the phrase itself isn’t used. So now you know.

Comments Off on Sleeping with the fishes

All Deino Grey had ever wanted was to travel the world. Her sisters had held her back this far but she’d never left home and needed to get out from under their feet so she set out to do just that.

Her first thought was to become a singer on a cruise ship as her sisters had told her that she had a lovely singing voice (they were lying for their own nefarious purposes) but she got sacked after her first song aboard the Symphony Of the Seas. The reasons for which were never fully explained. She next tried the profession of fisherwoman but all she could ever catch was flotsam and jetsam. It was most frustrating.

Eventually, Deino settled on saltiest of seadog professions, piracy. It turns out she just had a natural ability for it so now sails around the world taking what she wants from whomever she likes. So there.

It’s A4 and made using acrylic, paint pen and pencil. Drop us a line to give her a new home.

Comments Off on Sole sister 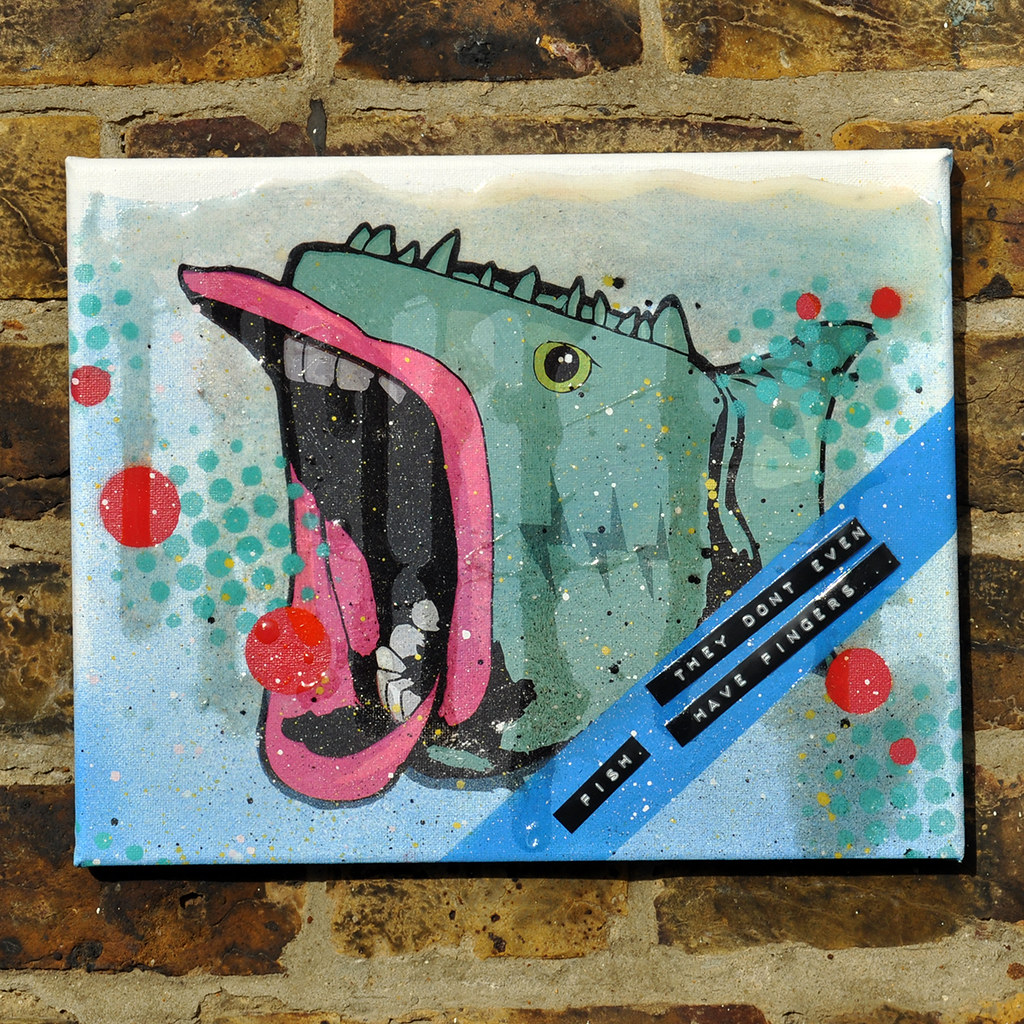 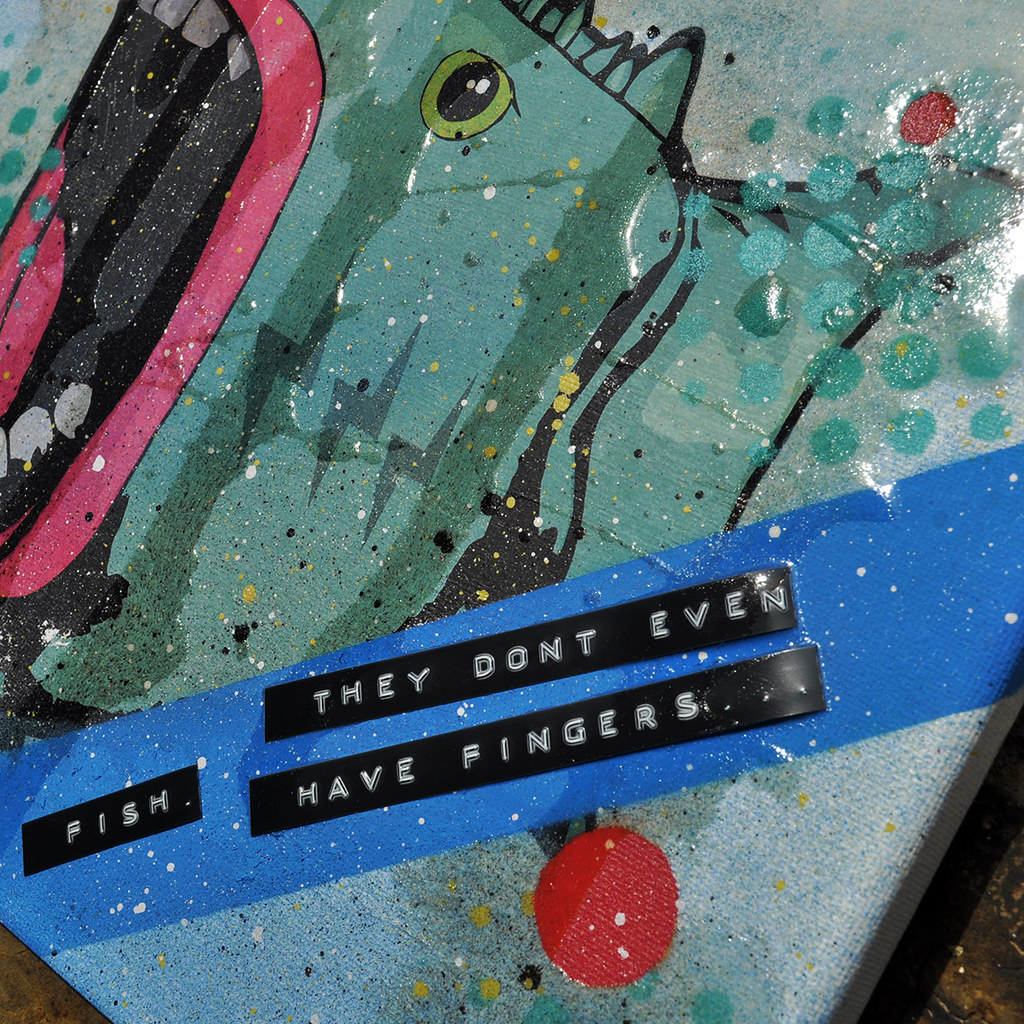 My life has been a lie. How can I right this colossal wrong? Can I speak to trading standards about the fact I’ve been mis-sold fish fingers my entire life. FISH DON’T HAVE FINGERS! It’s a fact. I’ve checked and double-checked. I even took up fishing for a while just to prove my point. So today’s piece is as much a public service announcement as it is art piece to vent my feelings on this most foul of lucifer’s lies. Fish do generally have teeth though. And this fish is, in fact, the pacu fish which is a close relative of the piranha and has teeth that look pretty much human-like. I’m not joking. Look up ‘pacu fish teeth’ if you don’t believe me.

Comments Off on Fish Fingers: The Truth 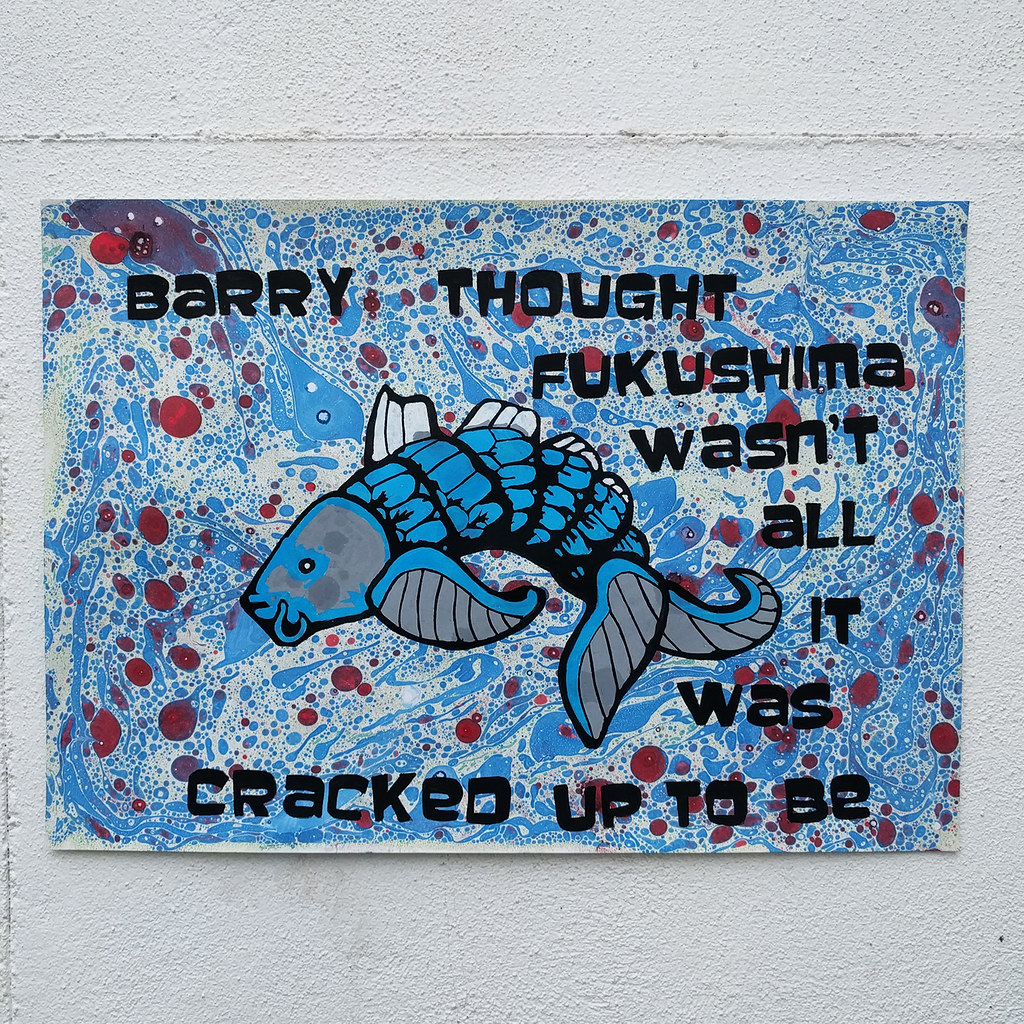 In progress shot – I really liked the fish at this point and we were wondering whether to reapply the stencil or not. We finally agreed we should but may explore this style a little further…

So there we were back home for Christmas with a load of paint we’d brought over when Mother Nature turns up blowing an absolute hoolie. With that kind of weather we didn’t need any more of an excuse not to paint and decided that having a couple of festive drinks indoors seemed to be a much better idea. That was when our older brother said we could paint the big wall in his back garden for the kids if we wanted – and as any self respecting artist will know that’s like a red rag to a bull.

So with no plan whatsoever we ended up going for a nautical theme. And having some fish falling in love. I’m not really sure why but we had to decide on something. Thinking about it it was probably because the fish was the least offensive and most kid friendly of what we had with us. We also only had 4 hours to complete the wall as we were booked in to take our nephews ice skating – but then again that’s how we like it – a deadline to actually make us pull our fingers out. So off to work we went making as much submarine mess as we could, which is actually bit tricker than you may think. It was at this point that my brothers little rats said that they wanted to join in and who are we to stop budding creativity in its tracks. Armed with every sort of way to apply paint to a wall they jumped on the wall with unnerving gusto, so much so that I felt bad when they had to be reined in a bit…

Finally, with the light failing we’d just about got to the point of completion. A somewhat fishy scene of piscine passion,

Comments Off on Piscine passion