Some days things just don’t go as planned. Last week we were asked if we would like to paint up a wall for the Global Street Art ‘Walls Project’ and we readily agreed. So far, so good. We both set to work trying to come up with something suitable and then proceeded to bicker about exactly would be suitable, until the deadline was looming dangerously close behind us and as time, pressure and panic set in we finally got down to brass tacks.

Now we haven’t painted up in the east end for an age as we’ve had the house of paint to cover but times change, so to the east it was. That was about as good as it got. We jumped in the id-iomobile and, naturally, both front tyres were flat.   A mile away from the garage, tires filled with air and another 30 minutes behind schedule we realise the car is running out of petrol. After pulling over and just managing to park up it was the somewhat familiar story of taking the empty petrol can and walking to the nearest petrol station. A good 20 minutes later we were on our way again.

After all these trials we eventually got to the East end and found the spot on Sclater Street which featured an unfinished piece by Masai that we were to go over. Finding and getting the ladders was our next task but considering our day that was easily accomplished. Finally we could get to work. Except that the other half of id-iom had forgotten to cut the outline of the stencil. Cue my fevered attempt to find something suitable for stencil cutting in a car park. With scissors duly purchased a hatchet job was then done on the outline and we could at least proceed.

Eventually the light was failing but we were in a position where we were happy. Finally it was time to grab a couple of photos and get home for a well deserved beer… 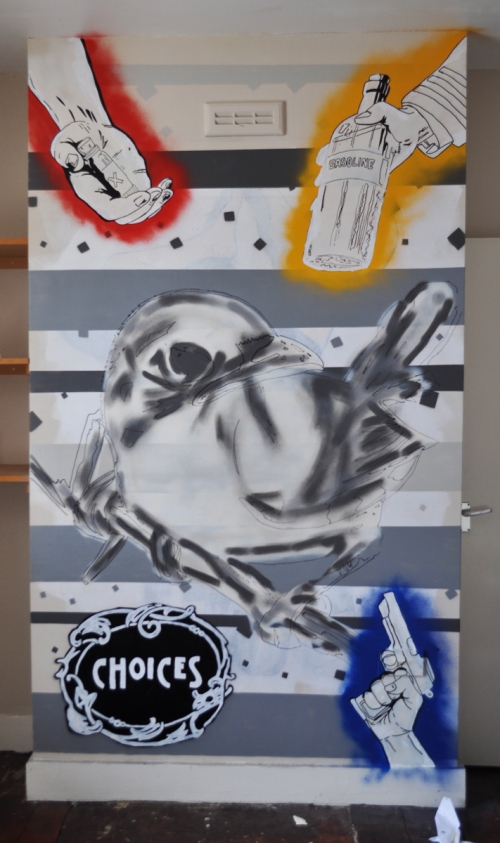