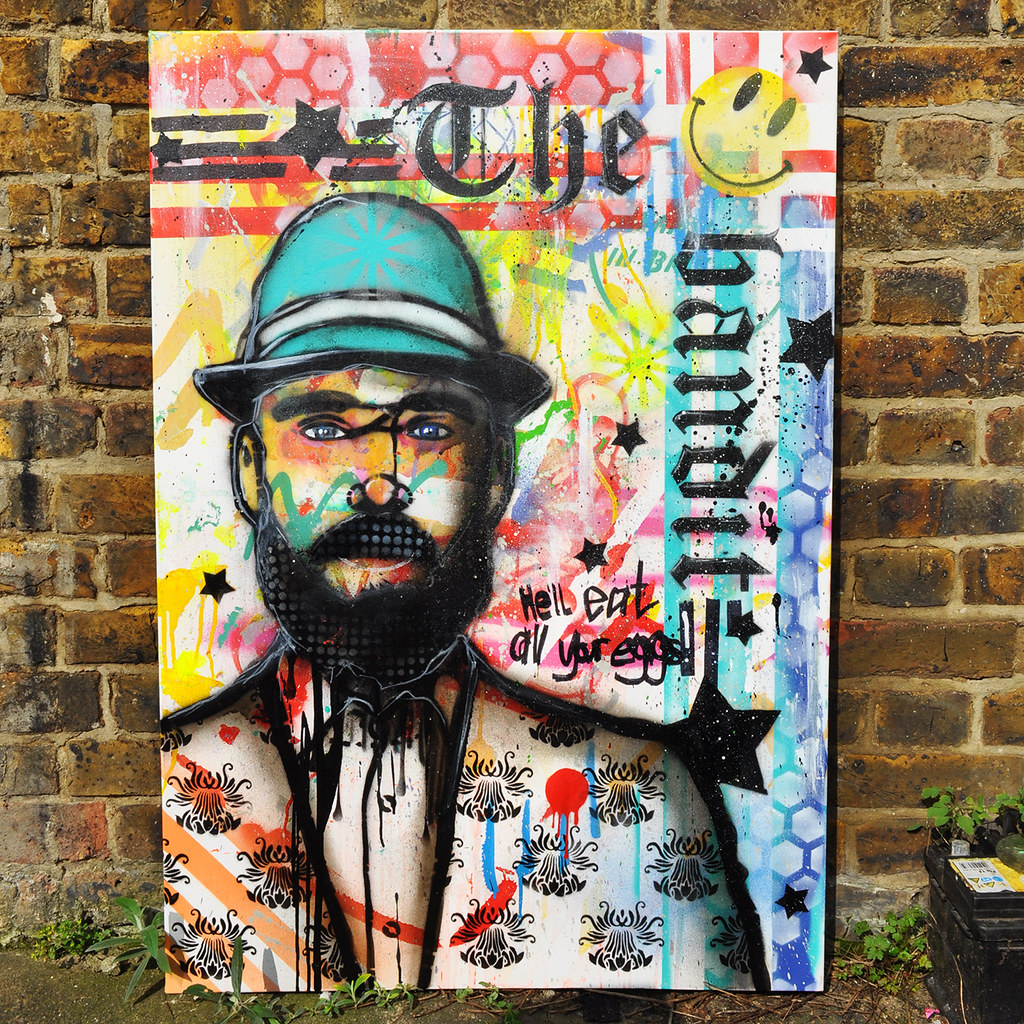 So, we did some work at the East Coast Social in Southend a few weeks ago and I just recently found a couple of pics on my phone that I had forgotten about. I think the fumes may have been getting to me that day…

We added some ECS bulb logo’s to the half dozen tables they had upstairs and gave the bowler hat light fittings a touch of class with the further addition of the alternative bulb logo. I believe the venue is going great guns and wish them the best of luck.

Go down gambling when you hear the call of the wild

With these dark and depressing days we all need a little something to spice up our life and us artists are no different. There we were wallowing about in our creative filth when the idea struck that we would have a little paint-off using the same base image. The rules were simple; we had to create a complete design using the same image of a friend of ours, we would then paint the background of the image before passing it over to the other to finish off with their foreground design.

After having a small photo shoot we headed off to our respective caves to complete the first step of the mission. We emerged with our canvasses held aloft screaming and taunting one another with ‘How’s about this then?’ or something similar (but with more swear words). We then both looked at each others’ work so far and gave a non-committal shrug before grabbing the offending canvas from the other’s hands and stalking off, looking to cover the others’ inferior work with something a little higher class. What we’re left with is two mashup pictures; one was originally to be called ‘Go down gambling’ and the other ‘Call of the wild’. What exactly they’re called now i’m not so sure. Maybe ‘Go down calling’ and ‘Go wild gambling’? Got any better ideas? If so, just drop us a postcard with your suggestions…

Title: Go down gambling when you hear the call of the wild
Materials: Paint pen, acrylic, pencil, pastel, spray paint and charcoal
Size: 60 x 60 cm
Please email if interested in either (or both)

Christmas is getting ever closer and the id-iom Yuletide Fundom Demolition sale is in full swing with another round of pieces starting at the austerity busting price of just 99p.

This picture proclaims that ‘It’s all just vandalism’ and that’s pretty much correct as far as i’m concerned. It’s a single layer screen print on A3 paper with unique hand finishing including acrylic and spraypaint. Signed on reverse. Here’s the Ebay link.

I’m F@#king Bored of You

Sometimes relationships get a little too much. The reasons can be many and varied but this picture shows a woman sitting on a concrete block, drink standing nearby whilst staring straight ahead. Her reasons for being so are clear…It’s A3 in size and is a single layer screen print with unique hand finishing including acrylic, watercolour, ink, chalk and spraypaint. Here’s the Ebay link.

‘I’m particular’ the picture states and i’m sure she is, just one look at those piercing eyes and you know it to be true. That, and the jaunty angle of her hat. It’s A3 in size and is a screen print with unique hand finishing including acrylic, watercolour and spraypaint. Here’s the Ebay link.

Ages ago our big brother said how much he liked these prints (which we’ve done a couple of before) so when we found an uncoloured one hiding at the bottom of a pile of other stuff we thought we’d do the decent thing and finish it off for him.

I would usually go for a bit more of a vibrant colour but the Muse took my hand and told me to go with brown. It’s not really a colour i’d normally choose but the Muse is usually right so I thought i’d take her at her word and give it a go. And this is how it turned out. I’m rather pleased with the end result and hope the big man is too. Right, what’s next?

Comments Off on Zapped again

Trying to do these little write-up’s can sometimes be more than a little challenging. Sometimes it’s easy and it practically writes itself but sometimes i’m just sat in front of the screen trying to find some pithy comment to make which will amuse my reader(s). ‘Zap!’ has proved to be one of the tough ones. I’ve been sat here for a while now and this is all i’ve got:

Is that really good enough? I’m of the opinion that it isn’t but like i said it’s all i’ve currently got. I could try and make up something funny about the lady in the hat but i’m just not feeling it today. Maybe i should go and do some art instead of typing away…

Just got this one finished up and thought you may like to see the original photograph that our picture is based upon. I’m not entirely where the inspiration for this one came from other than that our friend in the red hat has a slightly malevolent look in his  eyes  whilst our friend in the foreground looks slightly downcast at the thought of whatever was coming next. Anyway, make of it what you will…

Comments Off on Suffer every scream…