We said we wouldn’t. But we did it anyway… 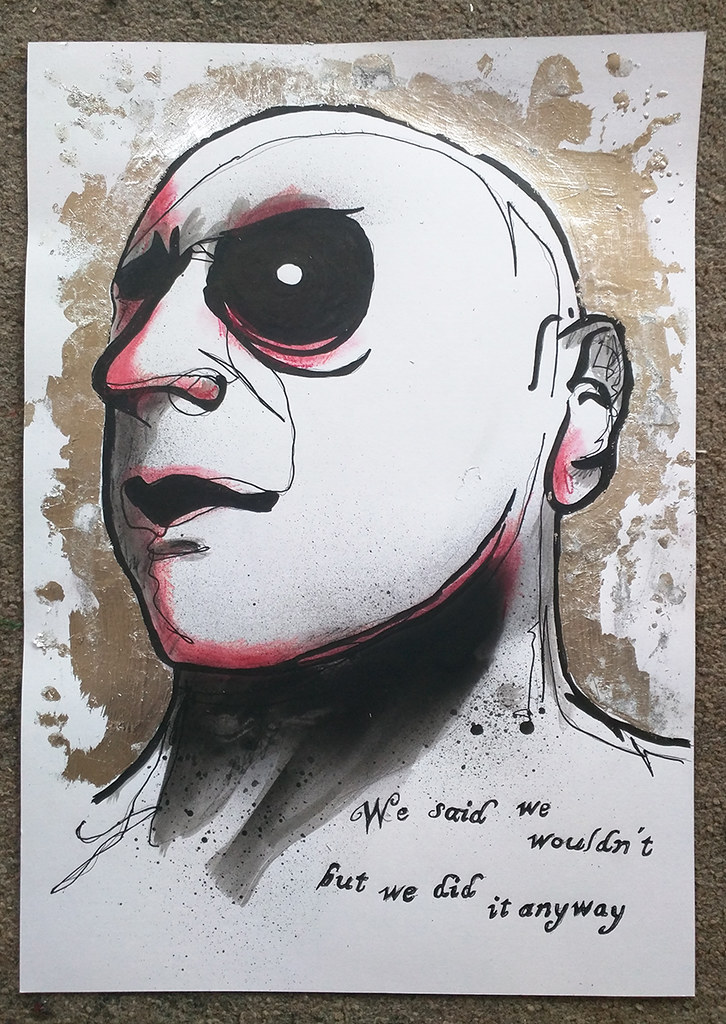 We said we wouldn’t. But we did it anyway…

If you keep up with our shenanigans at all you may be thinking that you’ve seen this image before. And you’d be right. We did it as a street piece in the East end a few weeks ago alongside a piece by WRDSMTH who was over from LA. After we finished we went to the Old Blue Last to wet our whistles and as we were enjoying our cold beverages WRDSMTH asked us if we’d use the image again and we said we probably wouldn’t as we tend to only use things once and then move onto something else and he couldn’t really get his head around it. Anyway, we agreed to do an art swap and needed to come up with a suitable design. Despite the fact we said we wouldn’t we decided it would be quite fitting to do a paper version of the street piece we did for him. So there you go.

Title: We said we wouldn’t but we did it anyway
Materials: Paint pen, acrylic, ink, charcoal, Tipp Ex, silver leaf and Spray paint

Comments Off on We said we wouldn’t. But we did it anyway…

Ah the power of the internet! Last week I was having a bit of a Youtube session when I came across a competitive eater by the name of the LA Beast who will eat just about anything. We first watched his cactus challenge video where, you guessed it, he eats a cactus. Whole. We then moved onto the ghost chilli challenge which brought tears to my eyes – as well as his. After perusing a few more videos we decided to check him out online. The banner on his Facebook page was looking a little pixelated so the muse demanded I create a new one for him as thanks for the amusement he provided.

Once I had an idea for the design it was all pretty straightforward except for the fact that I couldn’t find any decent resolution shots of his face in profile (which was required for my design). So there you have it. All that was left after that was to send it off to him and see if he’d get back. He did and it turns out he thought it was ‘awesome’. Everybody’s happy…

Comments Off on The LA Beast

This was a commission for our good friend Dave (a.k.a. DWTVLA). Everyone has a friend called Dave and whilst they are all as different as snowflakes they are all cut from the same cloth. I think their parents would have loved to call them something different but i reckon you just know when you’ve got a Dave on your hands and have to obey protocol and call them as such. To do any different would be spitting in the face of common courtesy and established tradition. It’s just so the rest of us know where we stand.

Anyway, this particular Dave has been working in LA recently. You can just tell by his face that he works in ‘meeja’ and whilst in LA has evolved to become a self facilitating media node. I know this for a fact as i’ve seen him with his Wasp T12 Speechtool in hand barking orders to his flea-bitten lackeys. Oh how he’s moved on since being McDonald’s employee of the year…