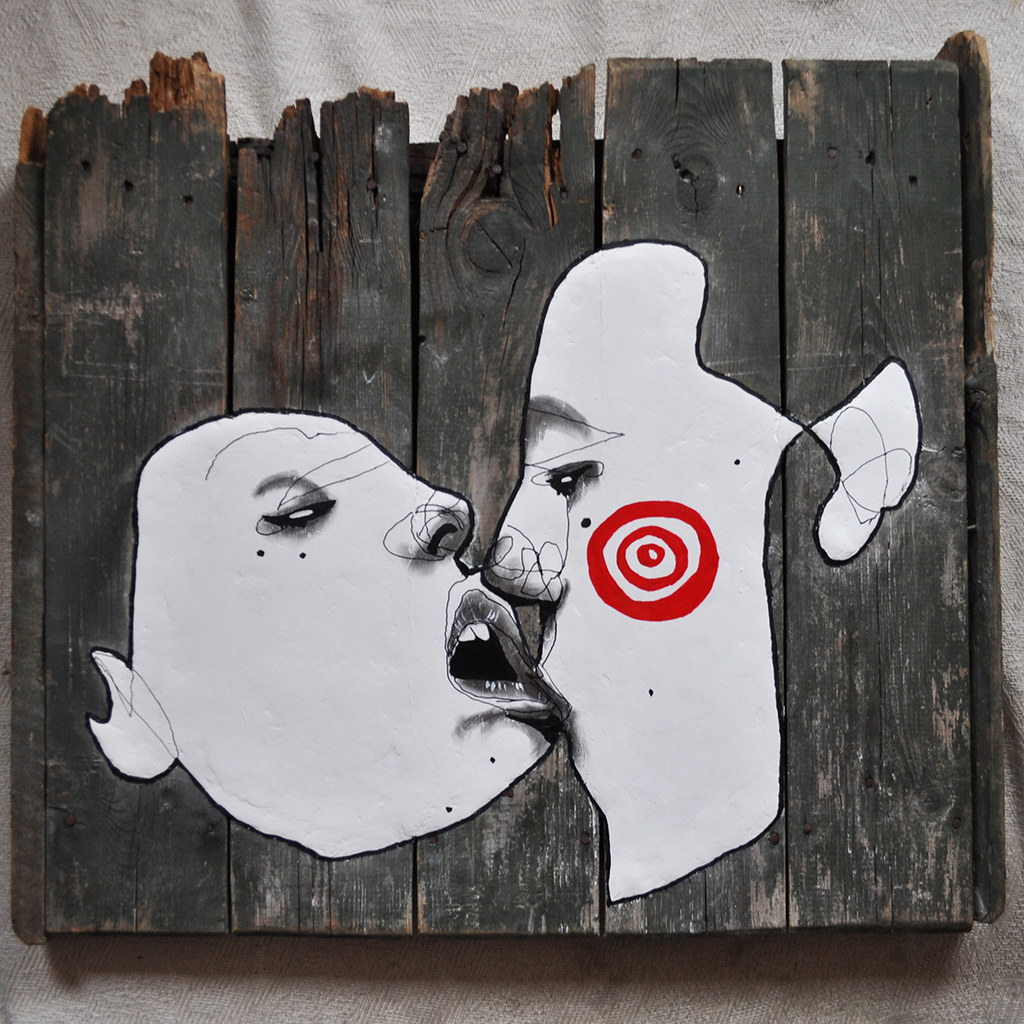 Now if there is one thing I love it’s a good bit of wombling. You know; making good use of the things that we find, things that the everyday folk leave behind. Anyway, there i was heading to the pub one evening when I chance upon this piece of wood. I’m still unsure of it’s previous purpose in life but it now has a higher calling. It sat in the hall of my house for about 3 months before inspiration struck and I had an actual plan for dealing with it. After walking past it everyday an idea had percolated into my head. I came up with the idea of a couple kissing, now I’m not entirely sure where the idea came from but that’s the muse for you.

So far so good. But then ‘Iceberg! Dead ahead!’ The trouble lay with the fact that the piece of wood was incredibly uneven and paint just didn’t look good on it so, for a short while, it was back to the drawing board until a solution jumped out at me. That solution came in the form of some polyfilla from the pound shop, which just seemed perfect for my plans.

After applying two tubs of the stuff and sanding it down it was ready for the final touches which consisted of a little painting here a touch up of polyfilla there and voilà. There still seemed to be something missing though, which I rectified with some words around the edge of the piece saying:

The only problem now is what to do with it as its now quite heavy and pretty fragile. Hmmmmm? Choices!!! It may well have to end up on the street if I can think of somewhere suitable unless someone wants to give it a better home somewhere…

Comments Off on To drink from your lips…

The Kiss of Death

The ‘kiss of death’ is generally considered to be an action or event that may appear innocuous but that actually brings about ruin and failure. It was also the name of a single shot gun concealed in a lipstick which was designed (and assumably used) by the KGB during the Cold War years.

With that in mind I can’t look at this picture and think of the title ‘Kiss of Death’ without imagining it as the opening of a James Bond film complete with saucy title sequence and musical accompaniment. I’ve even got the first scene worked out. Cut to a high ranking British diplomat having dinner with some foxy young lady. They then go back to a hotel room and she pulls her lipstick and shoots him in the liver with it and smiles a predatory smile. Cut to title sequence with Shirley Bassey belting out ‘Kiss of Death’ and you’re off.

Comments Off on The Kiss of Death

Who’s got a big mouth?

In WWII there was a common idiom ‘Loose lips sink ships’ meaning one should avoid careless talk as it may prove useful to the enemy. The focus of our picture never quite got the gist of this though. He’s something of a gossip and will, without doubt, repeat what you’ve told him to all and sundry as soon as your back is turned. In fact, most times he won’t even wait he’ll just shout it out parrot-like so every one in the vicinity can hear your tales of misery and woe. That said he is a very good friend in most other cases, totally selfless and as faithful as a swan. Just don’t tell him anything you don’t want the entire world to know…

Comments Off on Who’s got a big mouth?

Red lips kiss my blues away

Some days we surely all feel a little like the chap in the picture. Although he has been brushing up on his technique as we can see by his quality choice of reading material.

She’s from an edition of 5 and is a compact A4 in size and has been completed using the magic of screen printing, paint pens, spraypaint and stencils. Signed on reverse.

The boys down at Seven asked us to pop down and paint some more of their walls for their upcoming 1st birthday. This time though we were asked to paint one of the upstairs rooms (soon enough we’ll have given the whole place a lick of paint) instead of the corridor downstairs. We were asked to try and bring more light into the room as you can’t really see anything from bustling Brixton Market below. That one was easy at least – let’s paint the room white we thought – done. We still had to come up with a design though and this proved to be a little trickier.

After many hours of pondering what to do we decided to go back to basics. Seven is a Spanish tapas bar –  ah ha! Spain! That’s a good start we thought. So off to the interweb we went to search out anything to do with Spain. At this point ideas started to germinate and bloom into flowers of inspiration. What did we come up with you ask, well, first off we have a metre wide strip of Miro inspired graffiti that goes across all the walls. Its bright, colourful and fits the bill perfectly. We still needed something a little extra and this is where the clavel (or carnation to you and me), an adapted version of the Rolling Stones lips logo and our elementary Spanish came in. One side wall has a hand bearing a carnation – which, as we all know, is the floral emblem of Spain. The back wall has ‘siete’ on it which even I know is Spanish for ‘seven’. And the other side wall has a couple of Rolling Stones lips emblazoned with the flags of Spain and Catalonia that are sticking their tongues out at passing market goers. Job done.

A Face for Radio

A Face for radio

This girl is undoubtedly beautiful on the inside but in this day and age I would imagine she would be considered to have a good face for radio. I think it’s the pouty bottom lip and the mismatched eyes. Although there is nothing wrong with that as I have mismatched eyes and a somewhat pouty bottom lip (especially when sulking) although I, of course, am stunningly good looking and my asymmetry is part of my charm…

More and more these days though, the less fortunate (i.e less photogenic) men and women of the world (‘interesting looking’ as my mum would say) are being moved aside and being replaced by identikit facsimiles of some supposed beauty. Just take a look at FHM’s hot 1oo sexiest women. Now I haven’t read FHM since I was about 14 but its pretty difficult to miss their 100 sexiest list as it has been over numerous websites – including the ever respectable BBC. If you take a look at the list though can you really say all the women on there are the sexiest on the planet? Sexy must definitely mean something different from when i was a lad. It now seems to mean that all you have to do is be seen on some fluffy reality TV and that’s it job done.

I should probably stop now, turn on the radio and get back to painting as there is a possibility I could be ranting all day…

Comments Off on A Face for Radio

As i have undoubtedly mentioned before it is sometimes very difficult trying to explain where inspiration for any particular piece comes from. This piece is probably a perfectly good example of that. All i can really tell you is what i know – and that is that it’s a picture of a man wearing knickers, suspenders and high heels who is aiming a gun somewhere off page. That’s about as much as i can readily explain about it. The rest i leave up to you. Make of it what you will…

Title: Do you feel flush?

Comments Off on Feeling flush?