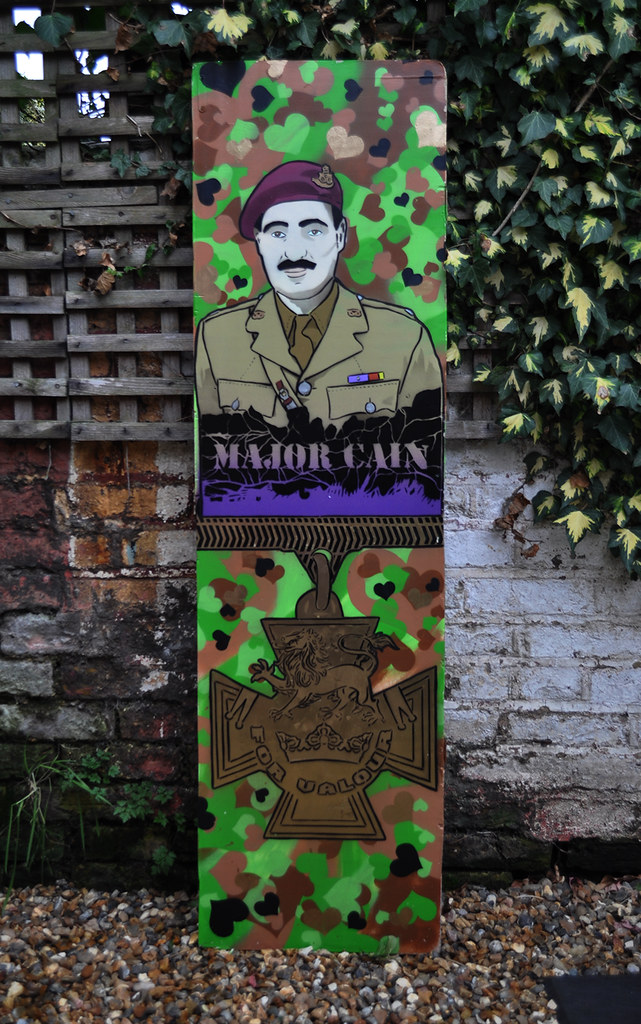 After reading about the exploits of Major Robert Henry Cain I just knew that we had to create a piece featuring him. They don’t come much more swashbuckling than the good Major. He is the only Manx recipient (to date) of the Victoria Cross, the highest award for gallantry in the face of the enemy, which was awarded for his brave actions during the Battle of Arnhem. I’m sure the history books can describe it much better than me but suffice it to say he loved to take out German armour with whatever weaponry was at hand and at the Battle of Arnhem alone personally destroyed six tanks and an unspecified number of self propelled field guns. As the wording for his VC states:

“On 20th September (1944) a Tiger tank approached the area held by his company and Major Cain went out alone to deal with it armed with a PIAT (anti-tank weapon). Taking up a position he held his fire until the tank was only 20 yards away when he opened up. The tank immediately halted and turned its guns on him, shooting away a corner of the house near where this officer was lying. Although wounded by machine gun bullets and falling masonry, Major Cain continued firing until he had scored several direct hits, immobilised the tank and supervised the bringing up of a 75 mm. howitzer which completely destroyed it. Only then would he consent to have his wounds dressed.

In the next morning this officer drove off three more tanks by the fearless use of his PIAT, on each occasion leaving cover and taking up position in open ground with complete disregard for his personal safety.

During the following days, Major Cain was everywhere where danger threatened, moving amongst his men and encouraging them by his fearless example to hold out. He refused rest and medical attention in spite of the fact that his hearing had been seriously impaired because of a perforated eardrum and he was suffering from multiple wounds.

On 25 September the enemy made a concerted attack on Major Cain’s position, using self-propelled guns, flame throwers and infantry. By this time the last PIAT had been put out of action and Major Cain was armed with only a light 2″ mortar. However, by a skilful use of this weapon and his daring leadership of the few men still under his command, he completely demoralized the enemy who, after an engagement lasting more than three hours, withdrew in disorder.”

Before the remains of his division withdrew and crossed the Rhine he took the time to shave then waited til all his men were across before he himself crossed on an old boat. Now, if that’s not a classic British stiff upper lip then I don’t know what is. To top it all off he was the only man to receive the VC at Arnhem who lived to tell the tale. To list more of his adventures would take far too long and I would suggest you check out his wikipedia page for more information and unlikely tales of derring-do. Now I just need to find something suitable to do with our little tribute…

Comments Off on Major Cain

This is who I always wanted to be

This is who I always wanted to be

Sometimes in life we end up being the person that everyone else wants us to be and then sometimes, just sometimes we manage to transform into the person we wanted to be through a combination of determination and good luck.

Take this girl as a case in point. She used to be a straight A choir girl who read books on advanced maths in her spare time just for a laugh – but then one day things changed. The day in question is a little tough for me to talk about though as I was there in person and can’t really say any more until the current court proceedings are over. What I can say though is that it involved plenty of alcohol, copious amounts of drugs, numerous firearms, a small amount of explosive and, of course, one of the cutest kittens I have ever come across. Well, one thing led to another and the woman we have before us today was forged in that crucible of fire – a crazy cross between a Robin Hood, Major Disaster and an American Apparel model. Who would ever have guessed? That’s all I’m legally allowed to say for now…