Man in the mirror

Things have been getting a little weird since lockdown. The intense boredom and general anxiety mix together in some odd combinations. In order to combat this I thought a self-portrait may be in order. I was wrong.

Looking at the paper in front of me I saw myself staring back or at least some facsimile of me – but things just weren’t quite right. The head too elongated, the nose too small but the dead, lifeless eyes I seemed to have got just right.

Then I realised it wasn’t really me but that unflinching dolt High Risk Hugo. A stain on society if ever I saw one. A man who on his good days was more like Chuck Norris on flakka trying to chat up your girlfriend but on his bad days the social equivalent of someone slipping a dead slug in your mouth and holding it shut.

I’ll not be doing another selfie anytime soon. We don’t need to let that particular cat out of the bag…

Comments Off on Man in the mirror

You’re probably not going to believe me but Gregor here used to be a top influencer on Instagram for this stunning good looks and perfect quiff but things have begun to go downhill rather rapidly for him.

It all started innocently enough. Gregor was studiously going through his daily beauty regime and was plucking a rogue nostril hair when he caught his own eye in the mirror. Taken as he was with his own reflection he gave himself a cheeky wink and it all escalated from there. Now he only has time for his own reflection. He’s given up posting on Instagram but sits staring at himself for hours on end. He will occasionally smile or wink at himself while he whispers unintelligibly into the mirror. What will come of him I hear you ask? Well if you know anything of Greek mythology then you’ll know that the story of Narcissus doesn’t end well for the person concerned…

On A4 and made using Charcoal, pencil, paint pen and acrylic, drop us a line if interested.

Comments Off on The Stare

Continuing with our attempt to fill our studio building with graffiti we have pretty much nailed one room now at least and here’s our final wall to prove it. As the other walls are a little dark we decided to continue with the sketchy feel of the other pieces but go down the tried and tested route of putting a lithe young lady on the wall. In the original image that this piece is (very loosely) based on the lady in question is reflected in a mirror although due to the fact that she’s at a funny angle to the mirror it’s not an exact reflection hence the fact that the two sides are slightly different. Eagle eyed viewers will of course have already worked this out due to my flipping of the id-iom stencil on her arm.

I’m sure our hordes of adoring readers will also be glad to hear that I’ve done a little internet research into how to get a decent panoramic shot and will be attempting to capture said shot today. Don’t hold your breath though…

Comments Off on On reflection

You’re not as pretty as you think you are! 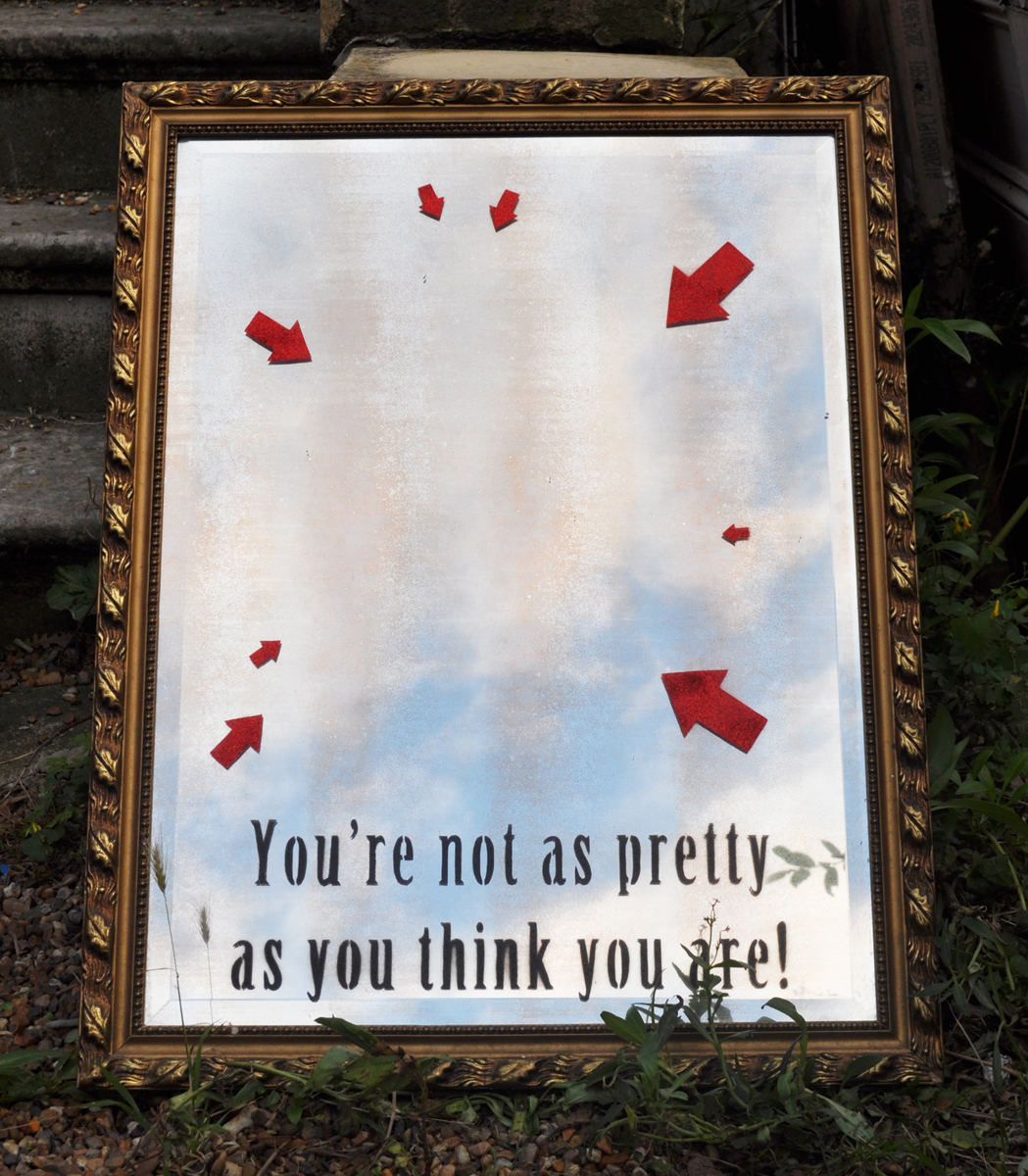 Mirror, mirror on the wall…

Who’s the fairest of them all? Now here’s something! A mirror that actually tells the truth about you instead of just silently lying to you.

This piece stems from another slightly more ambitious project which to date has been a little complex but rest assured we will be trying our very hardest to finally get this project off the ground again. Firstly though we have to teach ourselves some advanced carpentry skills and then move on to some elementary electronics. Easy!

I can remember trying this before and pretty much coming up with a bit of 2×4 with a battery and a light stuck to it. Suffice to say it wasn’t really up to scratch and had to be thrown back into the depths of the idea cupboard to hopefully break forth fully formed at some future point. Let’s hope it’s time has come!

Comments Off on You’re not as pretty as you think you are!

Having been asked if we could do a picture featuring none other than the ‘love’ obsessed French skunk Pepe le Pew I hastily got on my internet researching hat and saw what i could come up with (basically if you are some form of black and white animal he will attempt to have his wicked way with you!)

After looking for quotes from Pepe i came up with some absolute corkers and must confess that i’m at a loss why he isn’t much more popular today. I mean, come on, a french skunk that is perpetually looking for love must be some kind of comedy gold. Especially when lines such as “I am ze captain, and you are ze first mate. Promotions will follow quickly!”, “Permit me to introduce myself. I am Pepe Le Pew, your lover” and “I pierce you with the ack-ack of love, flowerpot” are ascribed to him. I could easily do a couple more pieces using just Pepe le Pew quotes.

Anyway i finally settled on using ” You know, it is possible to be too attractive” as i thought it would be particularly fitting on a mirror we had lying around the house (another item brought home that was found on the street). Once i’d cut the classy skunk striped text and got a few hearts on there it was just a matter of putting a stencil of the great skunk himself on there just to remind whoever is gazing at the mirror of one of his viewpoints on life.

Title: You know, it is possible to be too attractive!

Comments Off on The Pepe le Pew commission