The clubs are back open, the music is pumping, the smoke machine obscures faces and lasers drown the dark room in light. Suddenly the dj drops a song that sends ripples through the dancefloor. Now is the time to spread your wings and show them what a real disco queen is capable of as you strut confidently through the crowd to your preferred spot and begin to gyrate slowly…

Unfortunately it’s still a fantasy in the UK but we’ll get there eventually. Disco queens stand by…

When the trumpet sounds

Apparently, in the Book of Revelations, seven trumpets are sounded to herald a prophesied apocalyptic event. Upon the sound of the first trumpet, hail and fire mingled with blood is thrown to Earth, burning up a third of the trees on the planet, and all green grass. Thankfully this is not that trumpet. This trumpet contains a genie that looks very much like trumpet virtuoso Clifford Brown. When you hit the right sequence of notes the genie will appear and grant you one jazz based wish. The trumpet’s current whereabouts are unknown although it’s strongly suspected to be owned by Judi Sheppard Missett who just happens to be the founder of Jazzercise. Work it out for yourself…

As I’m currently moving house I don’t have my usual tools of the trade with me. What I did manage to grab whilst packing was my unopened Scrawlrbox that I had got through Upfest. Scrawlrbox is a subscription service that sends you a box every month with some art supplies in so you can have a play around with some new techniques and ideas. The box I went for included some tri-blend markers (essentially fancy felt tips) and some other bits to get me going. And this is what you end up with.

Comments Off on When the trumpet sounds

Karen had never even been anywhere near China. The closest she’d come was the china Wedgewood plate set that had been given her by her aunt and she’d disinfected the whole set just to be sure as soon as the whole Coronavirus thing had started in China. She’d been fretting for days. She’d even made her son burn his entire collection of Wu Tang Clan music and memorabilia to be on the safe side because it sounds a bit like Wuhan. Yet, when she looked in the mirror she knew something wasn’t right. Despite all her precautions, it would appear she’d come down with something after all…

It is A2 in size and made using gouache, acrylic, oil pastel, googly eyes and a touch of imagination.

It will be up on our big cartel page soon…

Comments Off on Self diagnosed Covid-19

Comments Off on Musical Wallpaper 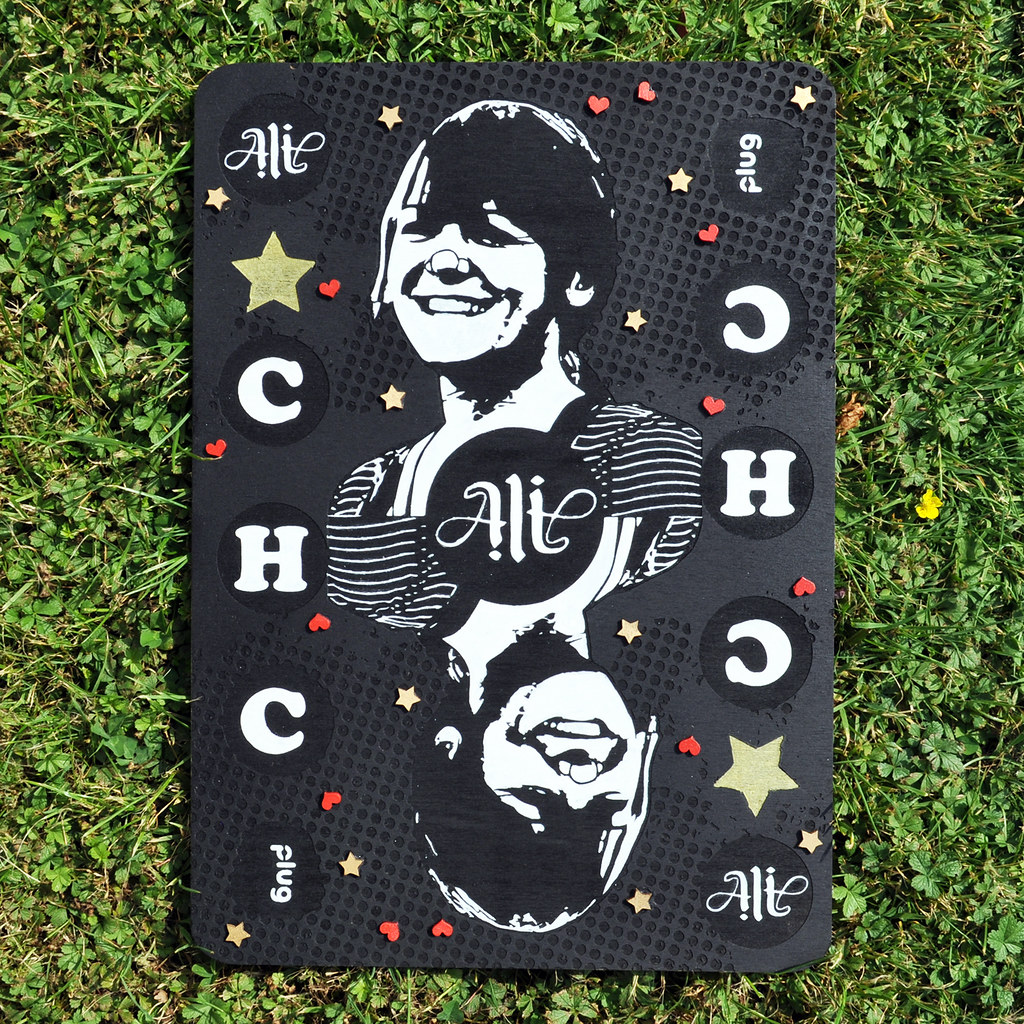 We offer today’s post with something of a heavy heart as it’s the first memorial piece we’ve done. It was created to mark the passing of a good friend who sadly leaves behind her a husband and two young kids. Our love goes out to them.

If you knew Ali then you knew that the most important thing to her was her family but also that she loved playing her role within the music industry. To that end we’ve created a kind of playing card design to signify her ‘Queen of Clubs’ status (obviously) featuring the Plug logo and references to her husband and kids. She was a fun loving mother, wife and daughter who was taken at far too young an age. I could try and say more but words seem to fail me.

The piece is lasercut on wood and then handpainted with the small extra heart and star elements stuck on for the final touch.

Comments Off on Queen of Clubs