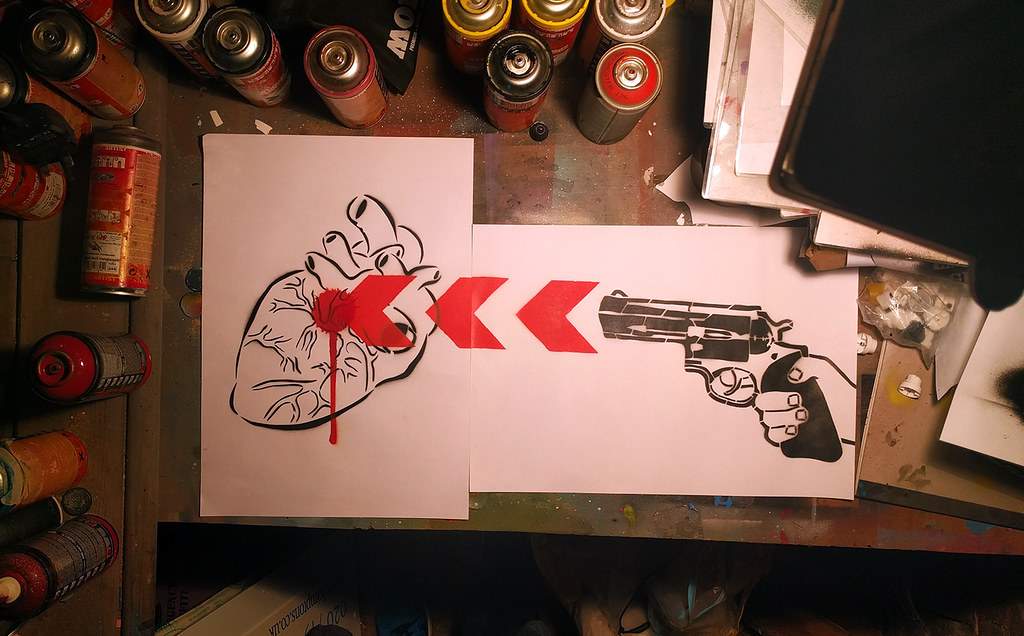 Do you know what happens when I’m left alone for too long. This. This is what happens. I happened upon the heart stencil whilst doing a small tidy of my paint area. It had slipped down the back of the table. Pesky stencil. Upon realising what stencil it was my brain did some kind of paradigm shift and unleashed an earworm upon me. Now I’m attempting to bring that earworm to you through the medium of cryptic stencilling. Once I’d knocked up a quick gun stencil I was good to go. So, which 80’s karaoke classic am I trying to get across here? Answers on a postcard. And if i’m lucky you’ll have it bouncing round your head all day. I’m all heart sometimes…

Comments Off on What’s the song? (cryptic stencilling edition) 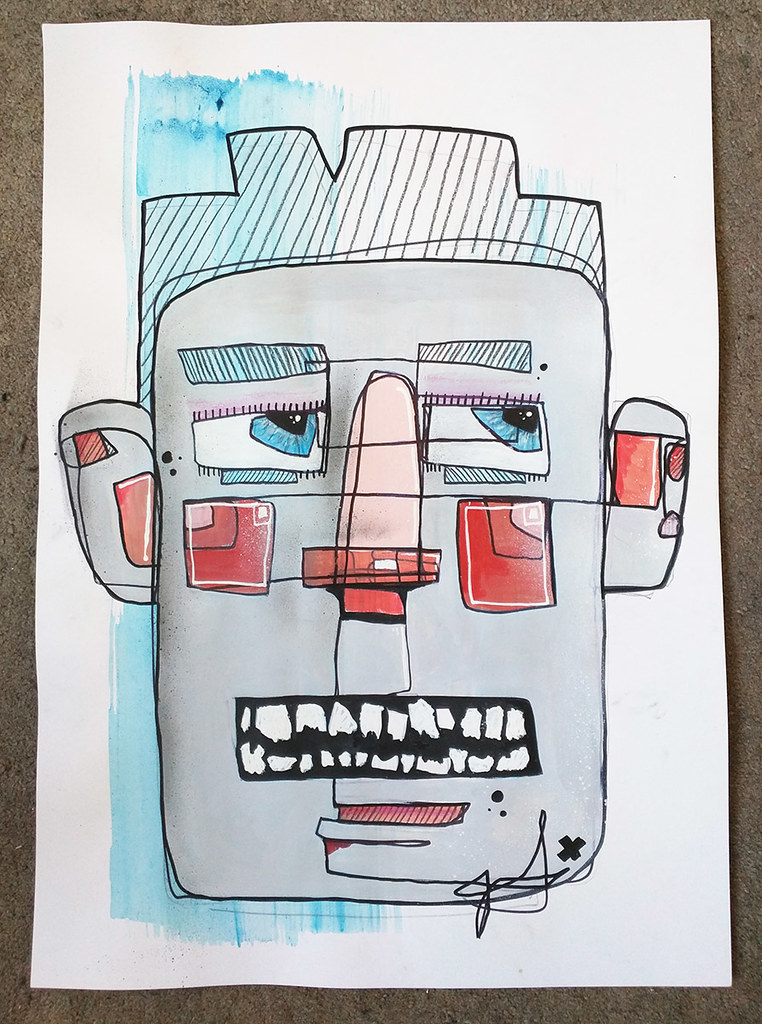 Whilst rustling around for some paper to start a piece on I came across a bit which had, quite lazily, been used as a piece of scrap to test a pen and wipe a paint brush. It had obviously been the closest thing to hand. As it had no other apparent use I decided to just have a little play around with it and guess what happened this little beauty came out of the ether. I’m not really sure what to say about it apart from the fact you never quite know what you’re going to get before you start…

Title: Out of the ether and on to the paper
Materials: Paint pen, acrylic, spray paint, watercolour and charcoal
Size: A2

If you hate everything…

I’ve always liked to imagine that the Manic Street Preachers’ 1998 song ‘If you tolerate this your children will be next‘ was about the Daily Mail and the fact that if we’re not careful they’ll be putting out a daily junior edition to indoctrinate our children into their radicalised nonsensical thinking.

Then before you can say ‘Social websites harm a child’s brain!’ we’ll all be making highly judgemental knee jerk reactions to every possible scenario, whether we know a single thing about it or not. This would inevitably lead to a catastrophic chain of events whereby most of the UK population would become diehard Daily Mail readers and we’d become a totalitarian police state. id-iom would then have to raise a resistance army made up from the hardy few who experienced a serious case of cognitive dissonance on perusing the Mail. I can only imagine the resulting conflict would be much like the film ‘Red Dawn‘ (the 1984 version not the 2012 version) and we’d eventually rise triumphant in some bleak alternate universe.

After a quick bit of internet research it actually turns out that the song is actually about the Spanish Civil War. Apart from that however I’d like to think my imagined story still holds true. If you haven’t read the Daily Mail and generally disklike everything in life then maybe, just maybe, you should give it a go. Anyway, what else was I meant to do with a copy of the Daily Mail?

Comments Off on If you hate everything…

Sometimes, even as the artist, the motivation behind a piece can be impossible to work out and sometimes it’s easy. Today’s piece is one of the easy ones. I’m not really sure if it needs any further explaining but i’ve got a bit of time on my hands so i’m going for it…

With the recent demise of international man of the masses, Nelson Mandela, I obviously kept hearing the word ‘Mandela’ being bandied around on TV. Combine this with the very similar sounding word ‘mandala’ and, hey presto!, you’ve got a Mandela mandala. A little bit of wheatpasting action later and it’s on the streets. Job done.

Comments Off on Mandela mandala

Extra! Extra! Read all about it!

Mupan may be diminutive in stature but don’t let his size fool you. The unscrupulous bugger has been spotted hanging around the East end again and, no doubt, up to his old tricks. I’m not sure if you’re up to date on what happened between us last time we crossed paths but needless to say it ended up costing me. Let’s just leave it at that.

I was hoping that’d be the last we’d see of him but, sure enough, here he is again – Bobby Big Potatoes – leaning against a wall and reading a paper seemingly without a care in the world. His big toothy grin should be enough to deter you but I’ll make it clear; If you do happen to come across this joker then steer well clear. He is not to be trifled with. You have been warned…

Comments Off on Extra! Extra! Read all about it!

The lack/love of money is the root of all evil

I’m not sure if you’ve come across Tyvek before but it’s a pretty cool material and is exactly what the Paperwallets are made of. It’s breathable but waterproof and is very strong and difficult to tear but easy to cut (with a knife or scissors). And it takes a screenprint very nicely too.

The guys from Paperwallet got in touch and asked if we’d like to design a couple of wallets for them so we thought we’d give it a shot. I already had the idea of using ‘the love of money is the root of all evil’ but then found the similar-but-kind-of-opposite quote  ‘the lack of money is the root of all evil’ (which i can find attributed to both George Bernard Shaw and Mark Twain – take your pick!) I can see sense in both these statements to some degree or other so surely the best stance should be to respect money as a necessary evil of which you need some – but not too much! And this is where the wallet comes in handy – to remind you of this from time to time…

We’ve got one more wallet in the pipeline so expect something new soon.