A while back one half of id-iom started using maps as the background for a number of demotivational posters, the other half of id-iom is still working on his maps but hasn’t quite managed to get them finished yet. It seems we’ll have to keep our ears to the ground for them.

Anyway a collector from America got in touch because he needed that certain demotivational message for himself and his family for when things just got a little too much. Originally from the UK he asked us to use maps of where they live now or were born which was easy enough for us. I just hope the whole family aren’t staring at them right now just lounging on a sofa thinking that today is a waste and they should just call it quits. At least until tomorrow that is…

Comments Off on Demotivationally Mapped out

We are all in the middle of a global pandemic, Tier 3 has just been activated in London, Christmas is looming ever closer and the weather is simply shocking. Don’t let that bring you down though, instead, why not simply engage in some extreme procrastination and write today off and maybe even the rest of December. Perhaps January and February too just for good measure..

Do you dig being dilatory? Would you generally prefer to be back in bed? Do you think things sound classier in Latin? If you answered yes to any or all of these questions then we have just the product for you! id-iom’s new range of demotivational artworks are ideal to give you that extra little nudge you need to justify to yourself whatever decision you’re about to make. It’s that simple! Anyone can use them!

She’s on A2 paper and the Latin text ‘Maybe cras amici mei’ (which translates as ‘Maybe tomorrow my friend’) will make your friends think you’re both educated and sophisticated. Voila! She is made using the magic of spraypaint, stencils, glitter, acrylic and imagination. If you’d like to give her a new home then get in touch. I completely understand if you can’t be bothered today though…

Comments Off on Maybe tomorrow my friend

Today’s eBay piece is ‘They will come…’ You can check it on eBay on the link below:

I decided that I wanted to produce something that looked like a vintage anti-Nazi propaganda poster for the Isle of Man and one of the perks of being an artist is coming up with some outlandish idea and then being allowed to bring it to reality regardless of any other factors – and today’s piece is a good case in point. I had just finished Ian Tregillis’ enjoyable alternate history book ‘Bitter Seeds’ about British warlocks fighting Nazi superheroes in WWII and thought to myself that Nazi bashing is pretty much encouraged in other media – books (like Bitter Seeds), computer games (like the Call of duty mini-game where you have to kill as many Nazi zombies as you can) and film (Inglourious Basterds springs to mind). So I thought I’d jump in on the action through the medium of art.

As the Laxey Wheel is one of the most iconic and easily recognisable of the island’s historic landmarks I thought it would be a good place to start. Throw in an improbably large evil Nazi owl descending from a darkening sky with it’s talons outstretched to snatch at the wheel and you’re off and running. Then all you need is some patriotic sounding text and you’ve got yourself some fake Manx propaganda c.1939. Right, what’s next?

Title: They will come… we must fight!
Materials: Screenprint, spraypaint, stencils, watercolour and paint pen
Size: A3

Comments Off on They will come…

I thought it time for another double sided piece and ‘It’s now or never man!’ is the somewhat inevitable result.

Do you enjoy sitting on the sofa when you know you have something more important to do?

Can you spell ‘procrastination’?

Are you more inclined to err on the side of caution?

If you answered yes to any of or all of the above questions then ‘It’s now or never’ is just the product for you! It’s ideal to give you that extra little nudge you need to justify to yourself whatever decision you’re about to make. It’s that simple! Anyone can use them!

Side 2 features a disembodied and somewhat world-weary looking face giving us what surely amounts to a bit of stinkeye. Luckily for us he’s no expert at applying mascara – or lipstick for that matter it would seem. Simply inexplicable…

Comments Off on It’s now or never man!

Just let it be – Demotivational poster no. 14

Do you enjoy sticking your snoot in other people’s business?

Have you a fondness for getting involved where there’s no need?

Are you unable to let things lie?

If you answered yes to any of or all of the above questions then ‘Just let it be’ is just the product for you! It’s ideal to give you that extra little nudge you need to justify to yourself whatever decision you’re about to make. It’s that simple! ‘FRANK! Just let it be!’ is a common enough refrain heard up and down the country on a Friday night. The Beatles even famously sang a song about it where the mantra of ‘Let it be’ is repeated many times. Sometimes it’s just not that easy though…

Comments Off on Just let it be – Demotivational poster no. 14 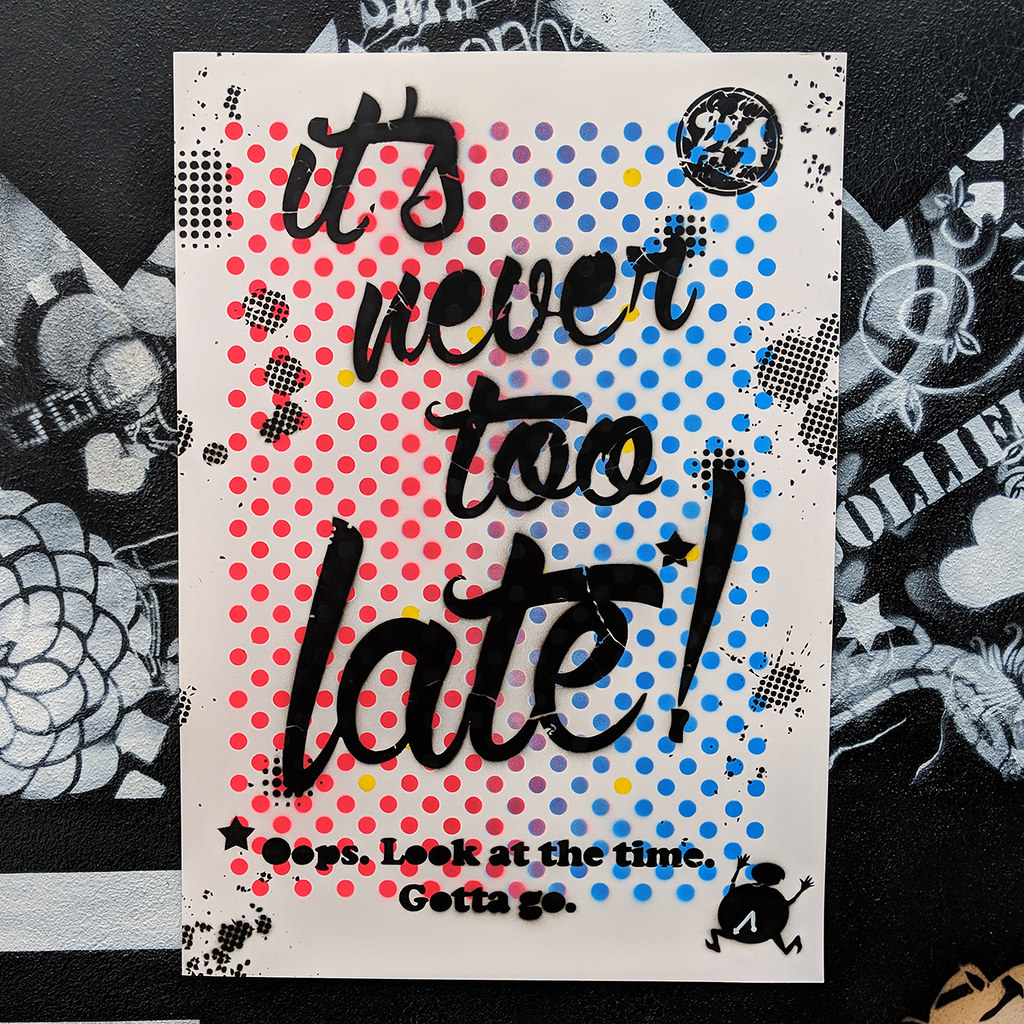 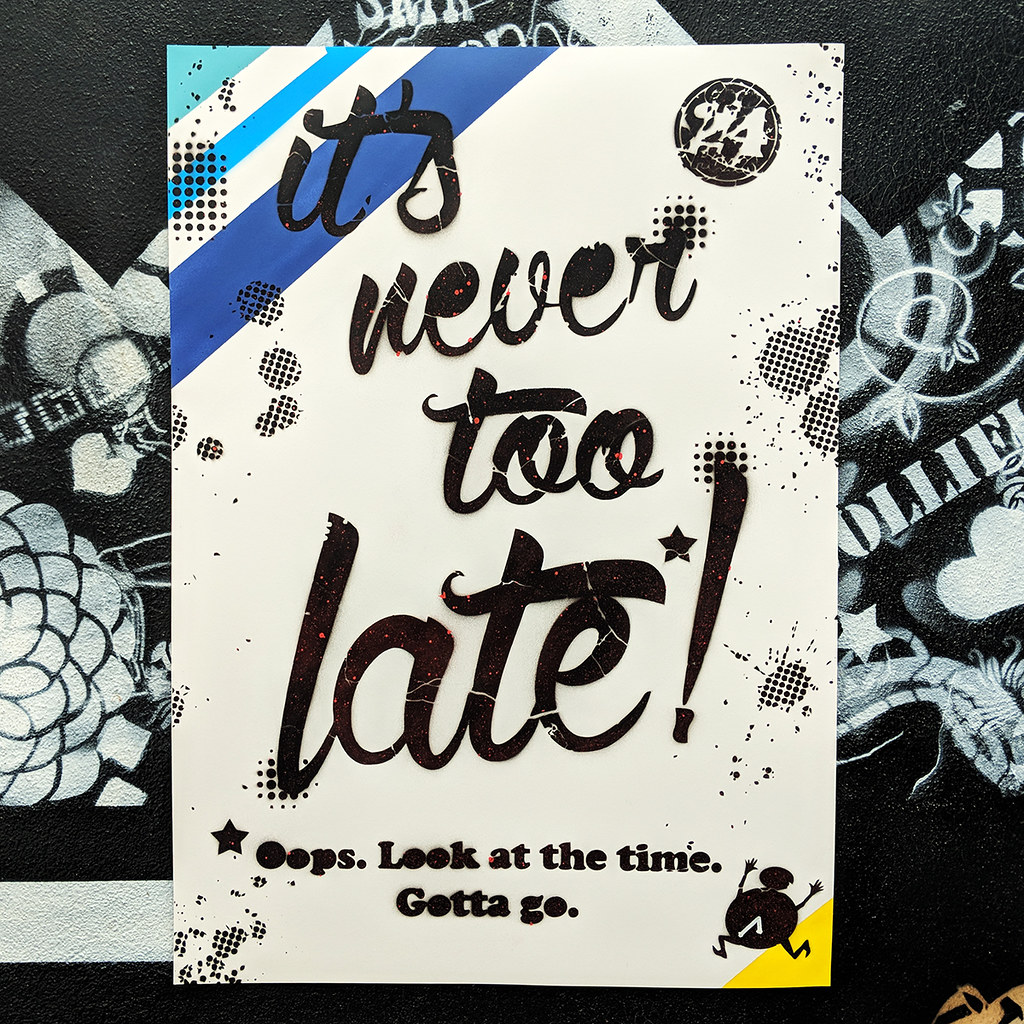 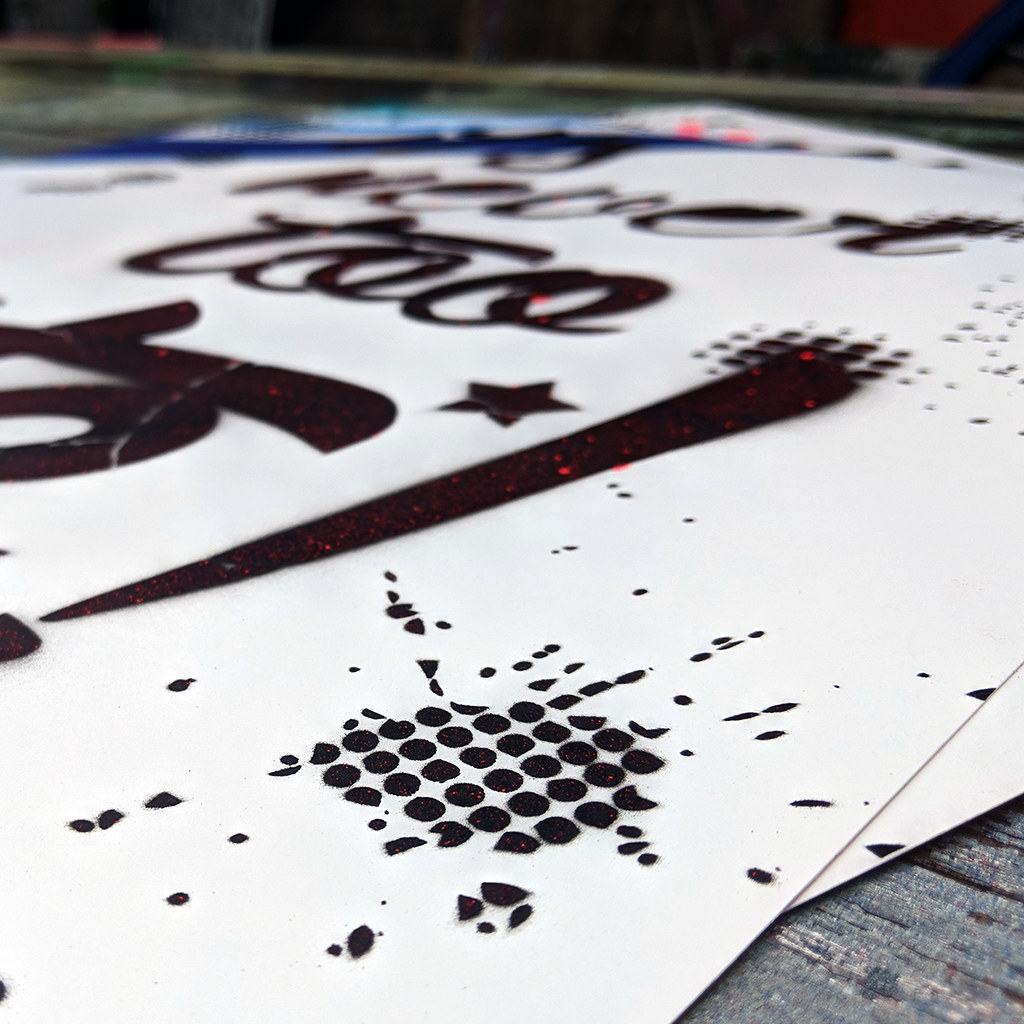 Are you slowly spinning in a downward spiral of apathy? Do you enjoy putting off til tomorrow what you should probably get done today? Would you generally prefer to be back in bed? If you answered yes to any or all of these questions then we have just the product for you! id-iom’s new range of demotivational posters are ideal to give you that extra little nudge you need to justify to yourself whatever decision you’re about to make. It’s that simple! Anyone can use them!

She’s on A2 paper and is made using the magic of spraypaint, stencils and imagination. If you’d like to give her a new home then get in touch. I completely understand if you can’t be bothered today though…

Comments Off on Demotivational Poster no. 17 – It’s never too late