Leporine lord of the shadows Barry the Bastard has once again crash landed in my life and decided to make my life a complete misery by invading my dreams and trashing the place.

Like a lot of these things it all started innocently enough. I was chatting to a friend on Zoom without realising they had their pet rabbit Mr Snugglebus on their lap and was I telling them about my well founded fear of rabbits when he hoisted the sneering rabbit into view and tried to tell me they were cute. That was my first mistake. The second was to think that Mr Snugglebus might keep his big trap shut. Now, I’m not calling Mr Snugglebus a grass but I’ve now had six consecutive nights of rabbit based nightmares featuring Barry. Sleep is my enemy. The Moon Rabbit is coming…

I think perhaps I need to get out more. This lockdown is getting to me…. It is A3 in size and made using the magic of one’s sleep deprived imagination, oil paint, paint pen and acrylic. Drop us a line if you’d like it to grace your walls…

Comments Off on The Moon Rabbit cometh… 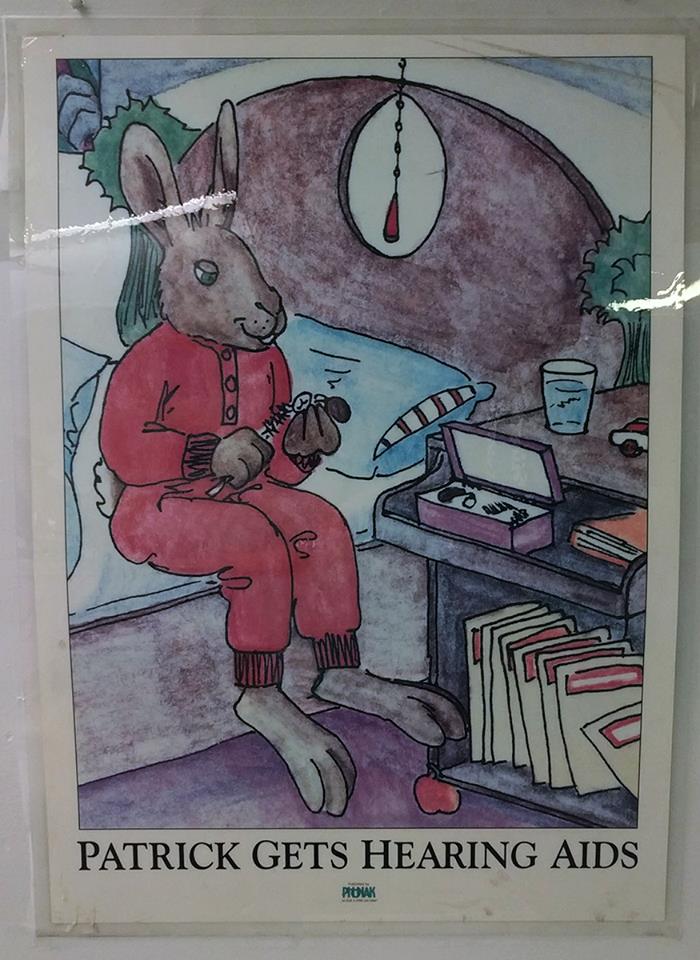 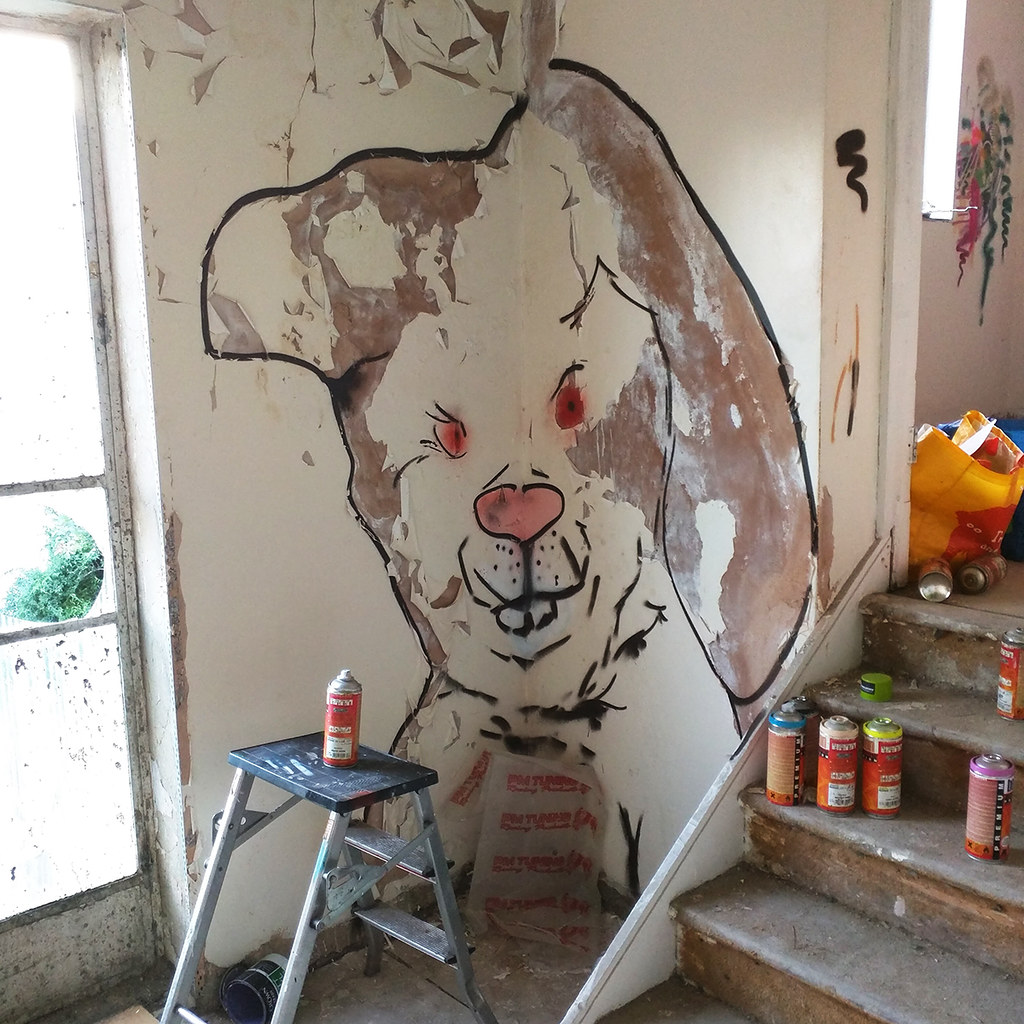 Rabbit in your headlights

When I first found this piece of metal I’m pretty sure I had a good idea in mind for it. Fast forward a couple of months and I find it in a corner of my ‘studio’ (which is currently a shed) and can’t remember for the life of me what I was going to use it for. Hmmm, what to do next? Whilst racking my feeble brain for my original idea the song ‘Rabbit in your headlights‘ (by UNKLE featuring the dulcet tones of Thom Yorke) comes on the stereo. For those that are unfamiliar with the song and video I’ve posted it below.

Thankfully this inspired me to ditch the search for my original idea (if you read this please come home!) in favour of one inspired by the UNKLE song. So here we have a man sat deep in thought who can’t see the metaphorical headlights of the car that’s coming to hit him. It’s probably his girlfriend driving. The lights are metaphorical because otherwise this would be a precursor to a pretty grisly scene from ‘World of Rallying Gone Wrong’. Anyway, I think this piece will be joining the pile of street drop stuff to be deposited when I can find a half decent day in which to enjoy putting it out…

Comments Off on Rabbit in your headlights 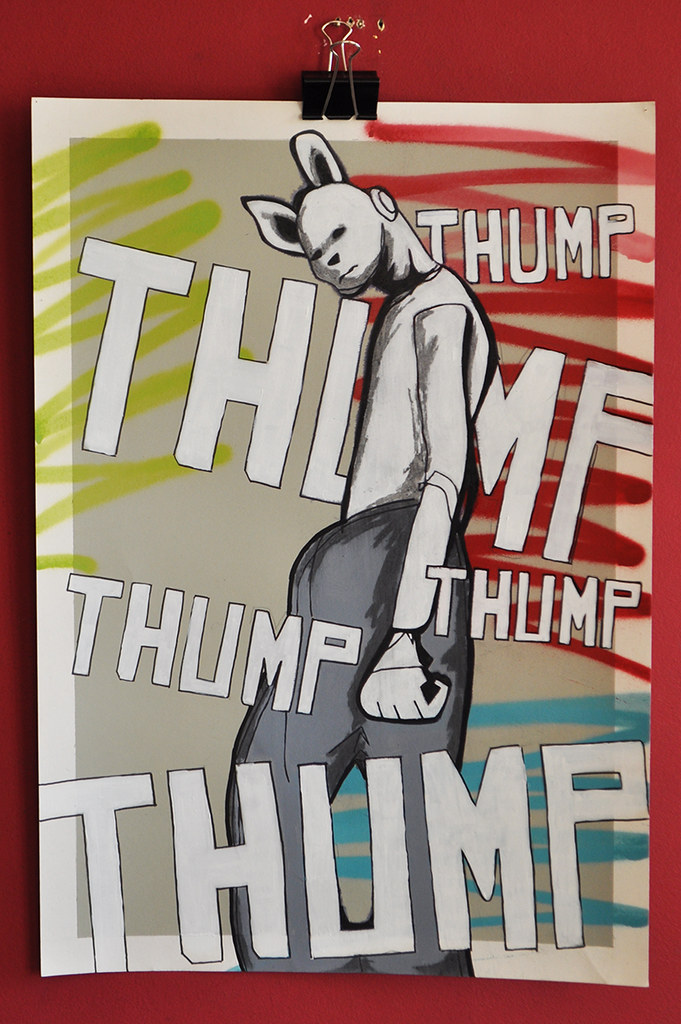 This picture was painted around Easter time when the thoughts of baby chicks, Easter eggs and, of course, bunny rabbits are all riding high in the popular consciousness. Now I have nothing against chicks at all and chocolate eggs are OK once a year but rabbits, rabbits are troublesome oiks at the best of times. It’s not like I’ve got anything personal against them but I can’t say I like them. Some people seem to think they are cute but I know better.

I’m not one to be taken in by this annual marketing coup, so I’ve tried to reveal a little of what rabbits are really like. Snide brutes of creatures who go around making a right old racket with there big clumsy feet. Like Thumper here. If i see him round my way I’ll set the cat on him…

Comments Off on Thumper

I think the clue is in the title on this one. We all know that rabbits are hardly trustworthy at the best of times right? Well i can safely say that you can never underestimate one that tests make up on itself! They are definitely the worst kind and not to be trusted under any conditions. You can just see it in their beady (but beautifully made up) little eyes.

Consider this more of a warning sign than anything else. My work here is done…

It is A2 in size and is made using the magic of collage, acrylic paint and paint pen . Signed on reverse.

Comments Off on Never underestimate rabbits