Gloria had finally done it. Through an arcane mix of magic and technology she had finally invoked Ctrl+Alt+Del in the real world.

Now, when she muttered the magic words Clippy the paperclip appeared and asked how he could help. She now had the ability to reset people who were vexing her. It was really quite something. One second they’d be chatting inanely away then they’d get a blank look in their eyes, sit like a mannequin for a few seconds then look embarrassed and shuffle off as they attempted to make sense of what just happened.

Gloria was really looking forward to Christmas this year…

Ctrl+Alt+Del is A2 in size and made using spray paint, acrylic, paint pen and oil pastel. It will be available on our new website imminently (link in bio)…

Comments Off on Ctrl+Alt+Del

‘No, it’s more like fucking groundhog day!’ I hear you scream from behind your screens and I have to admit that’s a sentiment that I hold myself but sometimes those massive grey clouds clear from across your minds-eye and you start to see things with a new perspective.

With this picture, the clouds only parted long enough for me to finish it before those ……… thoughts started to creep back in So much so that I was poised with a spray can hovering across this piece ready to deface it because I no longer felt the sentiment it suggested. It’s all swings and roundabouts I suppose…

Comments Off on Same same but different

Please do as you’re fu**ing told

You might think this has something to do with the current pandemic and you could be right with the pithy advice and colourful rainbow but don’t let that fool you – this is solid advice that can be applied in a countless number of potentially troublesome scenarios from pets and children to house guests and co-workers. Just remember words have power so you’ve got to use them carefully or they run out of juice…

It is 42 x 42 cm and made using Spraypaint, acrylic and paint pen. Drip us a line if you are interested in having this beauty at home…

Comments Off on Please do as you’re fu**ing told 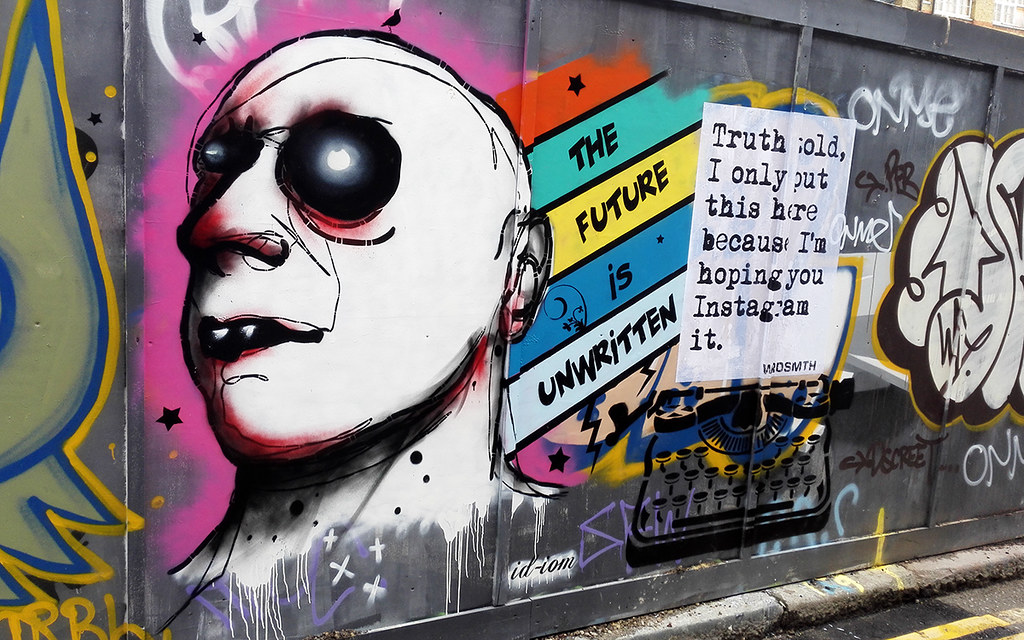 No colour above plimsoll line

No Colour Above the Plimsole line

As you can see this picture features a cat with some kind of rainbow-vision, a plimsoll line and a tiny version of us! It is actually a combination of two previous large scale pieces we had done. The first was our piece done at UPfest 2010 (featuring the ‘working’ CCTV camera in the top left) and the second was done on a friend’s wall.

It’s a single layer A3 screen print with unique hand finishing. The print also features our little ‘id-iom’ stencil that has been applied on the print just like on the UPfest piece. Here’s the Ebay link

Comments Off on No colour above plimsoll line

After uncovering the sordid affair that has been happening in the cloud room I thought it best to reveal all in one big panorama. You’ll just to trust me that it looks better in person considering that the demolition team are now going to be the only people to actually see it in situ.

Tears of a Care Bear

Tears of a Care Bear

This is what happens when you make Care Bears cry. As we saw yesterday the Care Bear had turned to drink in order to soothe his broken heart. His belly insignia had turned to rain clouds and the weather had responded. However, when Care Bears are depressed they are still dangerously volatile magic creatures so one should always apply caution. A Care Bear rain-bow is almost as rare as unicorn’s tears but a lot more spectacular – and will drown you far more quickly…

Seven @ Brixton asked us back again to paint up the corridor area in their fine establishment. This meant that we first needed to buff our work from last year –  which was actually surprisingly enjoyable and somewhat cathartic I have to admit. After that was complete we set to the task in hand of getting the new design up in double time for a special opening and wine tasting which was just one day away (which is now last Friday 17th). So to the dark studio it was – for a quick case of stencil finger and a refresher course in being a handyman.

First up we got our little character on wall, got him coloured in and then had to move onto phase 2. After the last time at Seven where we used some thread from the fingertips we definitely needed to next level this one too so decided to stick some pipes to the wall (this is where the handyman course was needed as I get a little giddy with power tools in my hand) which are dripping a veritable rainbow of paint onto the floor which then coalesces to spell the word ‘Seven’. Easy i hear you say! For most people i would probably agree but for this pair of design cowboys Phase 2 became something of a practical challenge. After a few failures to get the pipes fixed we somehow though we managed to stay true to our word and got the design finished for everyone to enjoy on Friday night… Phew!