The weird and wonderful skeletons in my closet

It’s said that most people have a skeleton or two in their closet – but I just wasn’t sure what mine were or even where the closet was for that matter.

With that in mind I went searching for them and, lo and behold, what did i find after about 4 hours looking for them? I find this merry lot that’s what. Now usually the connotations of having skeletons in the closet is a bad thing but not for me it would seem. They were all very charming, chatty and willing to talk for as many hours as you’d engage them on just about any subject from the current state of the music industry (which somehow they seemed very clued up on) to the implications of harnessing solar energy for future missions to the edge of the galaxy (their knowledge on this subject left a little to be desired).

Anyway I had a lovely time with my skeletons and plan to show them off to anyone who wishes to see them and that’s why I painted this quick picture of them to show people what you will get if you ever have the chance of seeing them in person. For some reason which I still can’t figure out though there was also a bear like creature in there as well, I’m not entirely sure why he was in there but hopefully more chat with them will reveal all… 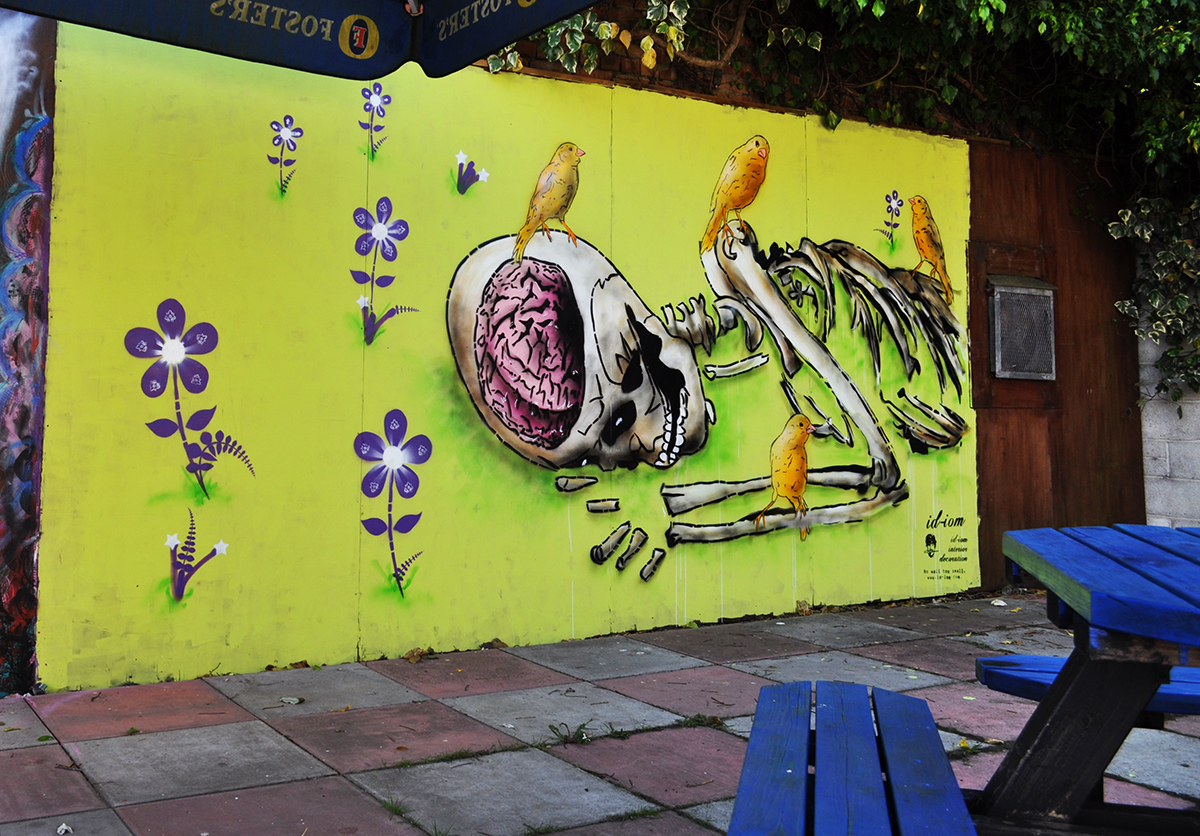 So here’s our latest piece on slate called ‘Lightning Bolt’ which is now framed up and good to go. This will be exclusively for sale at the Herrods pop up shop – which is open for this week only at 95/96 Lower Marsh St near Waterloo.

I think perhaps the colour palette and background stencils were subconsciously inspired by Olympic superstar Jamaican Usain Bolt. Although I haven’t got a particularly good reason for printing a skeleton on there other than the fact i thought it looked good. I particularly like how when printing on slate you get a grungy look to the print due to imperfections on the surface of the slate – which I think gives it a little more character. Hopefully it will get snapped up this week and we won’t have to bring it back home with us…

Comments Off on Lightning Bolt

From the cradle to the grave

From the cradle to the grave (Red)

So it’s a few days closer to Christmas and we are moving ever onward with our Yuletide Demolition Sale with another piece starting at the sporting price of just 99p. Here’s the Ebay link

Today’s offering is called ‘From the Cradle to the Grave (Red)’. ‘From the cradle to the grave‘ is an idiom. We are called ‘id-iom’. Therefore it is a good name. This is our latest A3 hand-finished beauty which we offer for your perusal. Featuring  a screenprinted level, some watercolour, a little spraypaint and a dab of acrylic this is sure to add a dash of colour to any wall. Signed on reverse.

There I was walking around the House of Pain(t) when i noticed the other half of id-iom had put up some David Guetta style hands on one of the walls. A representation of modern day love if you will. This forced me into a state of cognitive dissonance so I decided to disrobe, sit on the floor in a Zen-like state and try some deep meditation to see if i could come up with something fitting for the other wall. After some concentration and a quick snooze the idea hit me like a wet fish to the side of the head. To balance out this vacuous 21st century representation of love I would turn the other way and show some prehistoric style love. What better way to do that than show a rag tag collection of bones in the shape of a monkey skeleton with a magnificent beating heart in its rib cage. That will teach you to show your stupid gangly fingers at me David Guetta!!

Last week I put up a walking skeleton which I’m aiming to get immortalised in ink on my arm and today we have another image which will hopefully be  recorded for posterity on my half sleeve. I’ve always liked ducks and this bad boy has just achieved lift off velocity and now the sky’s the limit! Like all the other bits we’ve done around our House of Graffiti this will only be around for a very short while before the whole place is demolished. C’est la vie…

Comments Off on We have lift off!

So we’ve been pretty busy over the last week trying to fulfil our desire to fill our studio building with as much paint as we possibly can do before the old girl is reduced to a huge pile of rubble in the name of progress and we’re left without a studio! We’ve been doing reasonably well and should have a few bits completed over the next few days. Today’s offering is something that I’m looking at getting immortalised in ink as part of my ongoing project to get a half sleeve on my right arm. I thought it’d be nice to have him put on a wall first to check how he’d look before his final incarnation on my arm. And I reckon he looks pretty spiffy and will fit right in on my sleeve. Now i’ve just got to find a reputable tattooist…

From the cradle to the grave

‘From the cradle to the grave‘ is an idiom. We are called ‘id-iom’. Therefore it is a good name. This is our latest bevy of hand-finished beauties which we offer for your perusal. Featuring  a screenprinted level, some watercolour, a little spraypaint and a dab of acrylic these are sure to add a dash of colour to any wall.

Title: From The Cradle To The Grave

Comments Off on From the cradle to the grave