‘I always feel like somebody’s watching me’ sang Rockwell in his 1984 hit (which features Michael Jackson on backing vocals assumably because Rockwell’s dad was Motown CEO Berry Gordy). And he wasn’t wrong. In today’s always-connected society the feeling that you’re being watched is very real indeed. Because you probably are. Being under lockdown hasn’t really helped to allay this anxiety for Marcus here but he’s getting on with things as best he can. Aren’t we all.

Well, there it is. My first solo mission. I’m pretty pleased with the final product – from the skin tone to the wallpaper. Now I just need some sunshine again and I can move on with some modifications before whitewashing and starting all over again.

Comments Off on Lockdown London

Today’s eBay piece is ‘The Golden Squint’. You can check it on eBay on the link below: 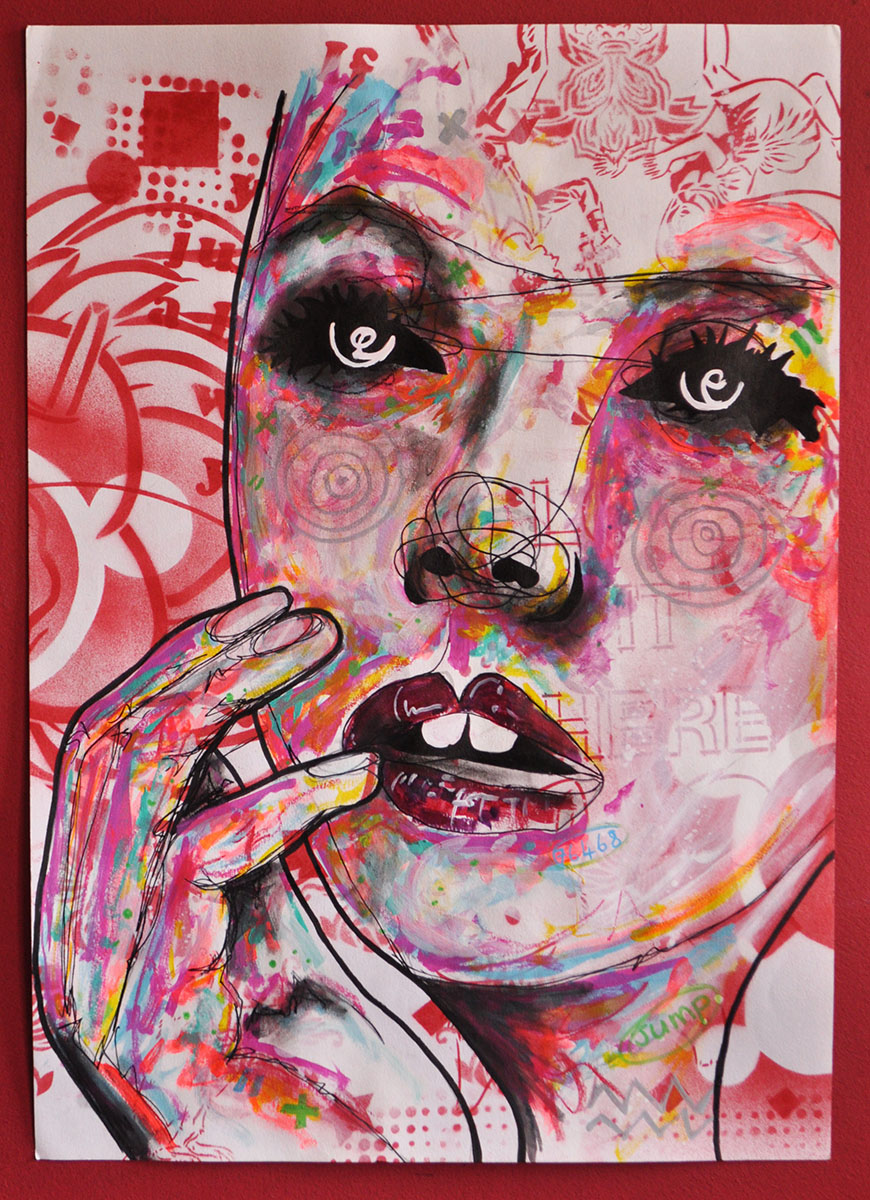 Sometimes, usually when I’m meant to be doing some work, I’ll catch myself staring out the window and am really not sure how long I’ve been doing so. I’d like to think it’s only a few seconds and that my brain has gone into some kind of immediate fugue state whilst my eyes wander around whatever vista is being presented in front of me but I really couldn’t be sure. It’s just as likely I’ve been staring gormlessly into space for the best part of an hour with no conscious thought interfering with my staring. I’d also like to say that when I come to from one of my staring episodes that I’m hit with some unusually brilliant insight into the workings of the universe but I don’t think that’s the case either. I’m sure sometimes it must have helped with some unconscious processing but I just couldn’t be sure. Anyway here’s a somewhat abstract version of what I think I must look like during a good stare…

A while ago we got in touch with Sr. X and asked if he’d be interested in doing a collaboration with us. We’d always liked his style and thought we may well be able to have some fun with a bit of street work. After knocking a few ideas round between us we settled on the idea of a stare off using the same image of a rather angry man as our starting point and seeing where we’d end up each doing it in our own style. So, with a somewhat unnatural day of sunshine promised for Sunday we packed up the id-iomobile and set off for the East End with hope in our hearts.

We’d had to guesstimate the size of the gates based on a photo but it turns out that we’d got the measurement just about spot on. So far, so good. Once we’d made the requisite amount of mess for his face it was just a matter or adding the stencil again and getting some shading in there. Meanwhile, Sr. X was adding his signature paint splashes that give a certain  motion to the whole thing. At this point I remembered the LED’s we’d brought along so it was decided to have some laser eyes that would hopefully give the whole piece a bit of a lift when darkness fell. I’m not entirely sure how long they last but I’m hoping maybe a week or so (if they haven’t been stolen or removed by that time). I’m not sure who’s going to win the stare off but all the loser has got to look forward to is some permanent retinal damage…

Comments Off on Blinded by the lights – id-iom x Sr. X

The centaur lady in this piece looks a little unnerved as she rears up with her WWI era helmet on. The text reads ‘The horse stares at its captor, barely remembering the free kicks of youth’.

I’ve been trying to write this for a while and that’s currently the best i’ve got. Which is far below the usual lacklustre standard of my posts. Sometimes it’s easy to do the write ups that accompany our pieces and some days it’s like pulling teeth. Unfortunately today is proving to be one of the difficult days. Do you know what? I give up.

Back to the Future mixtape project

Here comes the sun… (Mixtape with slate cover art – back)

Back to the Future – Exclusive id-iom mix tape with original slate cover art! All for the grand price of nothing! You’ve just got to find it…

It’s 2013 and we’re going back to the future with our street art take on the classic mix tape. It’s a combination of that old school hop with that new school hip! Although we have had to move with the times so we’ve gone and burned it on CD.

Both members of id-iom have been djing for more years than we care to remember and rather than go the inevitable route of uploading our mixes to Soundcloud and have no-one listen to it we’ve gone all experimental and attempted to fuse our street art activities and proclivity for making mix tapes. We’ve completed the hour long mix and then done the slate cover art to compliment the tunes. From there it’s just a matter of putting it on the street and seeing what happens.

Only a very small number of copies exist and ideally we’re hoping that we’ll get a reply/critique/abuse via email from whoever found it and then hopefully they’ll upload it to the web and share it around for further praise/ridicule. Really we’re just too lazy to upload it ourselves and are hoping that someone else will do it for us. It looks better that way. So, if you see one of these suckers on the street feel free to take it home and then lambast us via email on our shoddy skills and poor tune selection.

It’s the size of a standard roofing slate and has the CD securely taped to the back so she should last a reasonable amount of time out in the open. It has been completed using the magic of paint pens, spraypaint and stencils. They are signed on reverse with our trademark id-iom stencil and logo.

We are also now open to submissions – so if you dj at all and fancy taking part just get in touch and we’ll see what we can do. You can find more information on our facebook page here.
Happy hunting!

Oooh a big malevolent eye gazing at you! How very frightening! The evil eye is a surprisingly widespread belief  that a look is able to cause injury or bad luck for the person at whom it is directed for reasons of envy or dislike. Be afraid, be very afraid for the eye is staring at YOU!

Working on cardboard is quite liberating as you can really let rip and let inspiration (if you can find any) take you wherever seems good. I think most of the cardboard bits are probably destined for the street although sometimes they can look good when framed. I suppose we’ll just have to wait and see…

Using just about all the paint, pens, printing equipment and whatever else we have kicking around these are a lot of fun to work on and this one even features a (largley illegible) excerpt from Hans Christian Andersen‘s story ‘The Darning Needle’. So know you now.

Title: Am i staring?

Comments Off on I’ve got my eye on you…