Episode 7: Tammy in a Tank

Ding dong merrily on high, in heaven the tills are ringing! It’s a new day, we’re a step closer to Christmas and we’ve got even more stuff on Ebay…

Star Wars: Episode 6 – The Return of the Jedi saw Darth Vader die. Or did it? In fact, he lived on as a cloned version of himself and after retreating back to wherever it is Dark Lords of the Sith go to make their nefarious plans he’s back with a new approach to taking over the galaxy. In Episode 7 Vader’s back with a new shiny pimping costume and a decidedly different approach to galactic domination. Rather than an army of tough-guy clone troopers he’s decided to get himself an army made up of sexy stormtroopers (cloned from his own dead mother!) that he’s willing to hire out to whoever has the most intergalactic credits to pay. Expect to see cards similar to these in a phone box near you some time soon… It’s a single layer screen print on A3 paper and is signed on reverse. Here’s the Ebay link.

Tammy in a tank

This piece was inspired by a larger version we painted live at a small show we had a while back . It’s clearly a cat in a tank but her dark motives are obscured behind a cute fluffy visage but don’t be fooled. Surely the fact that she’s in a tank means her intentions aren’t entirely honourable. This is entirely made using the magic of stencils and spraypaint and is a glorious A2 in size. I for one welcome our new feline overlords… Here’s the Ebay link.

We have recently been asked to do a Star Wars commission wall in someone’s house for their son and this Stormtrooper is just one of many stencils i will be cutting in order to get this piece done. It’s quite nice to work on a Star Wars commission as there is so much iconic imagery to use. We’ll mainly be using the characters from the animated/comic Clone Wars series that were originally designed by Genndy Tartakovsky(who also designed Samurai Jack and Dexter’s Laboratory) but for now i’ve just got to come up with a suitably snappy design… I’ll get more pics up as and when we manage to get round to getting it done.

Also, I think the slate works really well. That was another lucky womble find. There is plenty more for me to grab too but it’s pretty heavy so it’ll have to be a couple of return trips. The demands of being an artist eh? 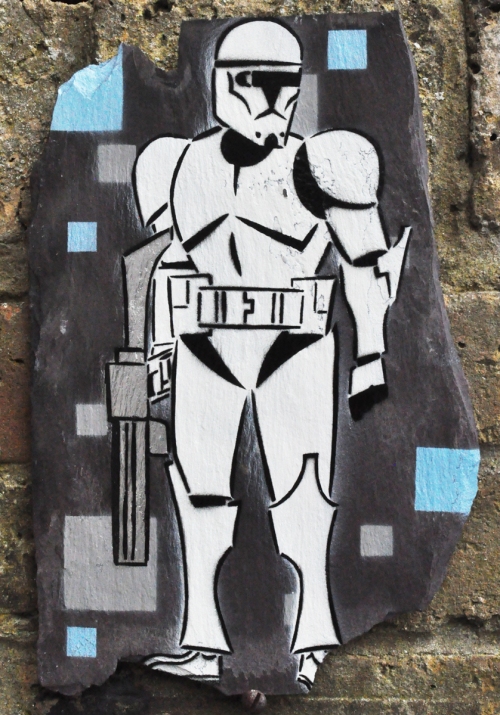