Bored of breakfast beer? Why not mix things up a bit with some delicious and zingy Blue WKD. Made from the tears of aging ravers distilled with the finest sugar, raw spirit and extract of Smurf. Great as a breakfast beverage with Soviet era jazz. Try it yourself…

To my surprise there was no supermarket description on the Blue WKD label. They’ll do it for some pretentious craft beer though. How frightfully rude. Allow me to assist.

Comments Off on Blue WKD 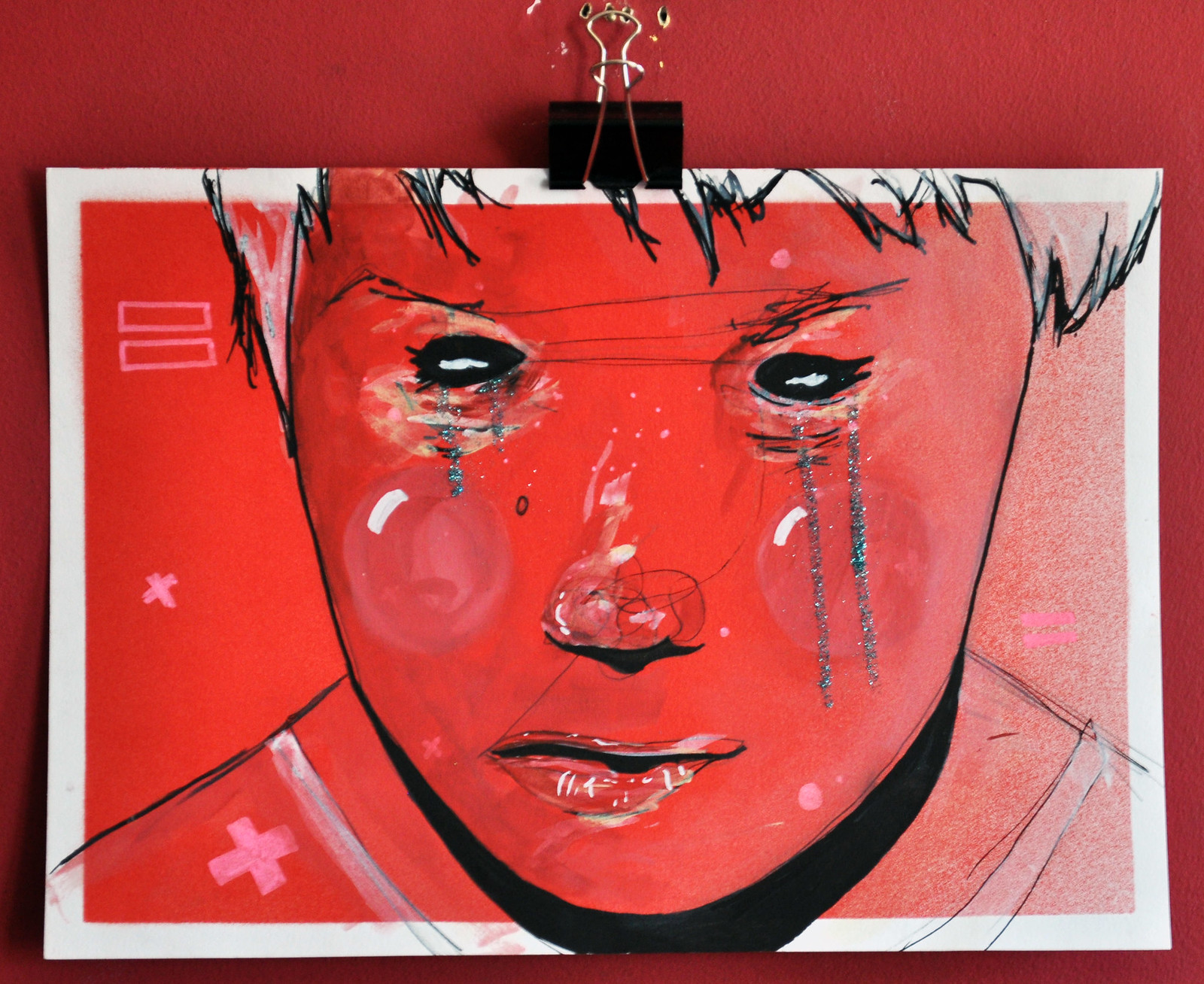 Title: The Boy with the Red Face
Materials: Acrylic, paint pen, spraypaint and glitter
Size: A3
Please email if interested

The first casualty of graffiti is innocence (a.k.a. Cliff was visibly upset – the video)

We have already put the still photo of ‘Cliff was visibly upset…’ up but now, after a little tinkering with our Super 8 footage, we have the pleasure of bringing you the moving picture version. If you’re not satisfied – you can have your 1 minute 55 back!

If, like me, you can clearly remember the first time you watched Oliver Stone’s ‘Platoon‘ then the death of Sgt. Elias (Willem Dafoe) is a pretty emotional scene where Adagio for Strings is playing over footage of a wounded Sgt. Elias trying to escape from the Viet Cong but ultimately getting mowed down in a hail of gunfire. I felt my dramatic fall was entirely reminiscent of this epic scene so felt a small homage would be worthy for inclusion in our humble production.  For my fact of the day I’ve learned that the iconic image of Sgt Elias with his hands in the air is actually a recreation of a famous 1968 war photo by Art Greenspon (as depicted below – and if you can’t remember or haven’t watched the scene from Platoon i’ve included that too!):

I’ve put plenty of links in today but i’m not entirely sure how many of them will work as many US based websites are shutting down for the day to show solidarity to opposing some potentially far reaching copyright legislation that the US is considering that would make it illegal for any US site to link to any site that has any copyright infringing material. Now, whilst this doesn’t directly affect the UK at the moment you can be sure that we’ll be passing something similar if it gets through over there and, personally, I quite like the internet as it is…

Comments Off on The first casualty of graffiti is innocence (a.k.a. Cliff was visibly upset – the video)

After a highly enjoyable Christmas and predictably long New Year it’s down to earth with a bump and on with the business of dealing with a brand new year. I can only hope that 2012 is a good one. Bring it on…

First up for the year we have ‘Cliff was visibly upset…’. After much debate and the consideration of far more serious titles (such as ‘Tears are the noble language of the eyes’) we finally decided that ‘Cliff was visibly upset…’ was the one to go with. As these rock faces are in a position where they are subjected to the worst the weather can offer for many months of the year we thought it a suitable title.

I will hopefully be able to come up with some more pithy and amusing blog posts as my brain warms up again over the next few days so apologies for this missive which is, even by my low standards, somewhat lacking. I was really rather hoping my first post of the new year would be certified internet gold but i suppose that now at least i’ve got something to work on.

Comments Off on Cliff was visibly upset…