I realise it’s a little late for Easter but it’s never too late for chocolate… We were asked if we could somehow paint some celebrity heads onto some huge (1kg) dark chocolate eggs. The eggs were for Thorntons and were to be auctioned off for the children’s charity Barnado’s. Other eggs were also be to be designed for the auction including one from fashion designer Henry Holland, celebrity tattooist Louis Molloy (who recreated two of the most popular designs available at his Manchester-based tattoo parlour – swallows and bluebirds) and patissier Eric Lanlard, cake-maker to the stars (who created an egg lavishly decorated with gold leaf and sugar crystal pieces).

The eggs were to remain edible so we had to work out exactly we were going to do this as we obviously couldn’t use our usual choice of paints. After hitting a specialist cake production shop (I didn’t even know that such places existed!) to pick up various edible inks, paints and bits & pieces we set to work. After many, many failed attempts (it was something of a sharp learning curve) we came up with what we thought was a foolproof plan. We would use rolled out marzipan to apply the stencil straight (as it was impossible to attach the stencil directly to the egg due to the shape of the egg) and then apply it to the egg along with some extra decoration. These were then dutifully sent off to be photographed and below is what we came up with:

Unfortunately the client then got back with the fact that they didn’t like them and could we possibly rework them so we were working directly onto the egg. D’oh! Back to the drawing board… With time running very short we got hold of some white eggs (so the black of the faces would work properly) and then had to paint the images directly on. Unfortunately trying to paint with chocolate just wasn’t working and we were running dangerously low of time and white chocolate eggs so we eventually had to resort to using brown acrylic paint (which obviously meant the eggs would not be edible) This whole process resulted in somewhat shoddier images (the Prince Harry one at the back is particularly so) but the client was happy with them once they’d been to the photographer: 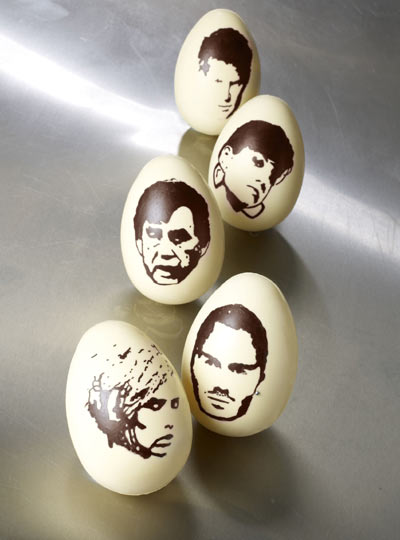 The interweb seemed to like them too and before we knew it they were all over the place. If only we could replicate that kind of attention all the time…

Comments Off on Celebrity Eggs