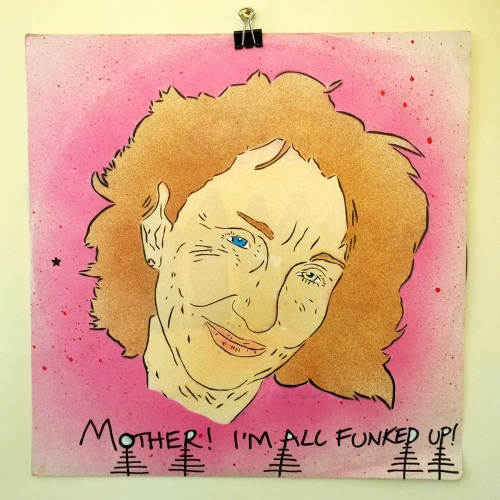 You want serendipity? I’ll give you serendipity. Although you may need a little background before it seems all that serendipitous. I’ve always loved records and have collected them on and off since I was about 16. I’ve also always been a womble and will pick up interesting things in my travels and take them home (usually to paint on). So what was I meant to do when I rounded a corner near my house and came across an armful of abandoned 12″ records lying by a bin. It was like seeing a load of forsaken kittens lying in the street. I had no choice but to scoop them up and head on my way feeling ever so slightly smug about the whole thing. While I was having a quick check through them (which revealed that they were largely mid 90’s dance) I thought I’d perhaps re-design the covers and then put them back out on the street.

So here’s the first of my redesigns. It was initially this: 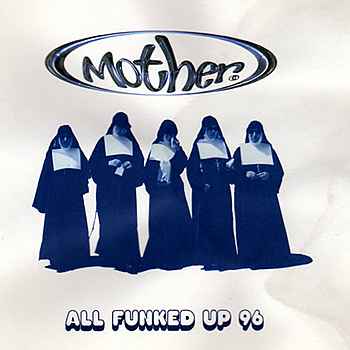 But is now the marvel you see at the top. I’ve taken it quite literally and used a stencil of my own mum. Ha! That will hopefully fox someone when it gets back out on the street…

If you want to know which record I’m on about you can find out here:

I Grow and I Rejoice

I grow and I rejoice

I grow and I rejoice (after)

I grow and I rejoice (before)

The hunter gatherer team that is id-iom has always had strong wombling instincts – often bringing home stray bits of wood, street furniture, signs and the like. You just never know when you might need it for another project!

Anyway, there I was quietly minding my own business when I come across an abandoned painting still in its little gold frame. After taking it home and having a closer look it appeared to be homemade and sadly a little neglected. As it wasn’t really to my taste I thought my best option was to give it a little makeover – hopefully breathing a bit of new life into it on the way – and get it back out on the streets.

Anticipating its new role on the street as ambassador for upcycling I thought I’d give it something of an upbeat message to go along with its new look. I can only wish him the best of luck in finding a new home.

If you like this kind of thing you can find more online at Creative Crap.

Comments Off on I Grow and I Rejoice