Please be standing for the King of all Things, Jasper Augusta Gibson. Not much is known about the self proclaimed King of all Things other than what can be found on his TikTok account. He claims ownership of all things both big and small. This apparently includes you, me, animals, metal, the air – literally everything! He claims to have ridden over the mediterranean in a small basket carried by many thousand ladybird. He reckons he’s the strongest man ever to have been born. There are many other bold claims he has made. The problem with the internet is that people are starting to believe him.

Jasper was created as a little thank you for one of our customers. I wish him well in his new home but hopefully that’s the last we hear of him…

Comments Off on Winning

Now it could be said that Carola here has what some call Narcissistic personality disorder or what others and my personal favourite, call megalomania. It’s not that she exhibits all of the symptoms but she certainly shows some and that’s enough for her.

Ok well it seems i might have misspoke. It seems Carola here is a full on Megalomaniac and from what I know of her very happy with the fact. In fact whilst she was posing for me all she could do was point at herself and quietly but persistently tell me to keep looking at her. As you can imagine this is quite difficult when you’re trying to sketch someone.

It is A4 in size and made using the magic of imagination, watercolour, acrylic, paint pen and ink. If you think she’s good enough to hang on your wall then get in touch…,

Comments Off on Look at me

Will you be my bubble?

With the lockdown easing it’s now time for the government to introduce ‘bubbles’ – and no, we’re not talking Michael Jackon’s reanimated chimpanzee.

Bubbles are defined as a group of people with whom you can have close physical contact. From Saturday, in England, single adults living alone – or single parents whose children are under 18 – can form a support bubble with one other household.

Now if you think this seems that the government are legitimising what the Dutch call a ‘seksbuddy’ then I think we’re on the same page. The other half of id-iom is always a little suspect when I paint nudes. He usually says the image has little meaning other than the pornographic and because of this I have loads of sketches of nudes. Only when I can shoehorn it into a good write up does it ever get past editorial and here is the government just dropping it in my lap. Not really sure why i chose watercolour as the medium for this one, i’m not particularly adept at using it. Practise makes perfect I suppose.

It is A4 in size and made using the magic of imagination, watercolour and pencil

Comments Off on Will you be my bubble?

To occupy the time during lockdown Manana here has started taking suggestions off of the internet for what she should do to keep herself amused. She’s already completed Zelda on the Nintendo Switch, perfected the art of making croissants and somehow become an expert in the art of fly fishing although she hasn’t been near any open water since the start of January.

Today someone suggested she paint herself blue and post the results. I’m not quite sure what the person who suggested it gets out of it but Manana was game enough. The results speak for themselves. What on earth will tomorrow bring?

It is  37.5 cm x 37.5 cm on Bockingford paper and made using acrylic, spraypaint, paint pen and watercolour. 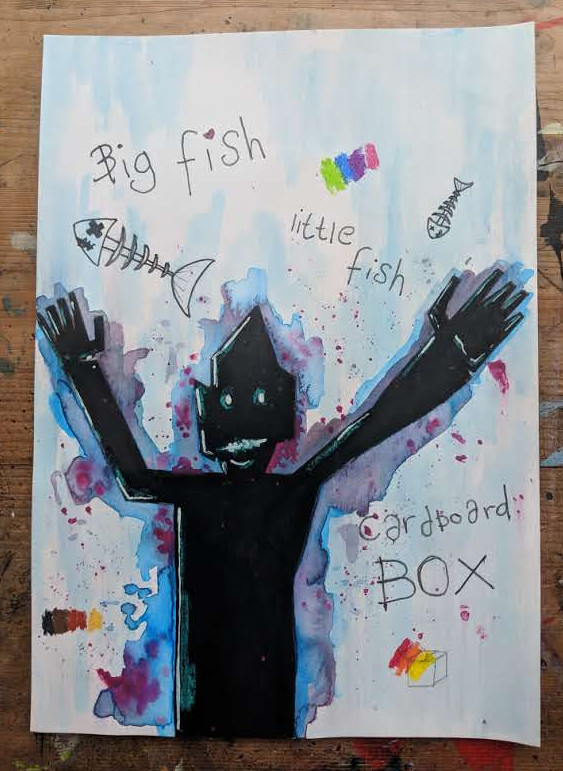 If you are of a certain age then the classic adage of ‘Big fish, little fish, cardboard box’ will need little explaining. For those of you new to class let me enlighten you. Instead of trying to explain it myself I’ll use the words of an anonymous blogger on the internet:

It is a jokey term about the type of dancing that used to happen at raves.

These movements are completed abruptly and jerkily.

So know you now. Our work here is done. 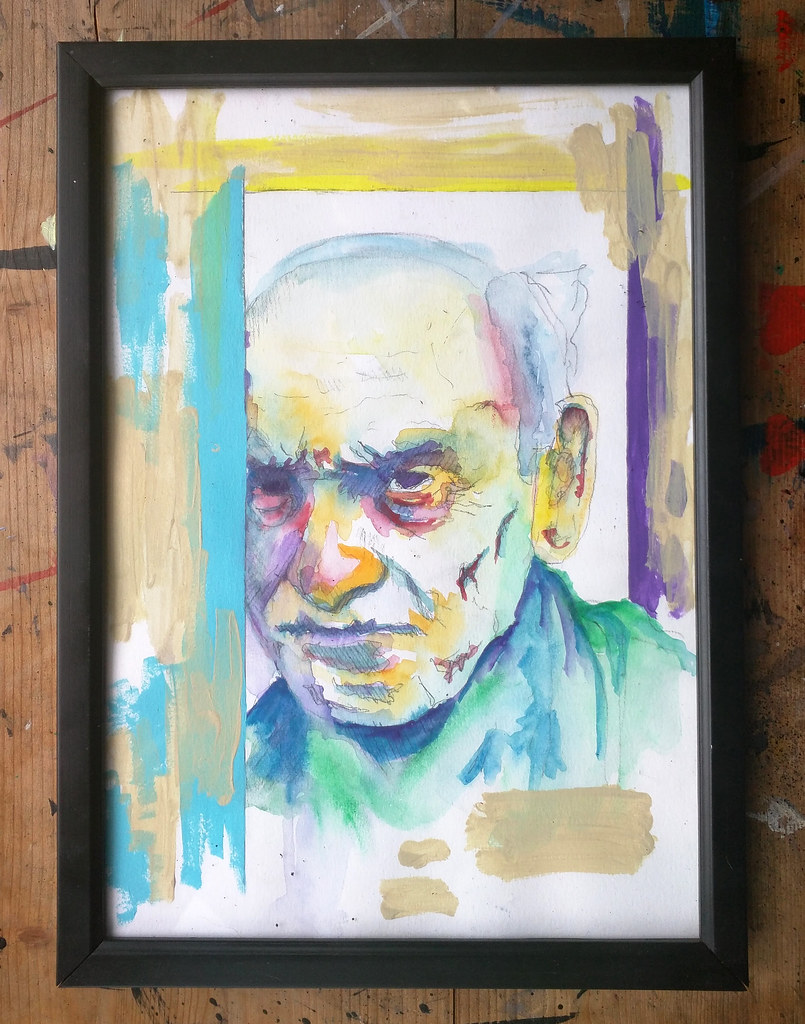 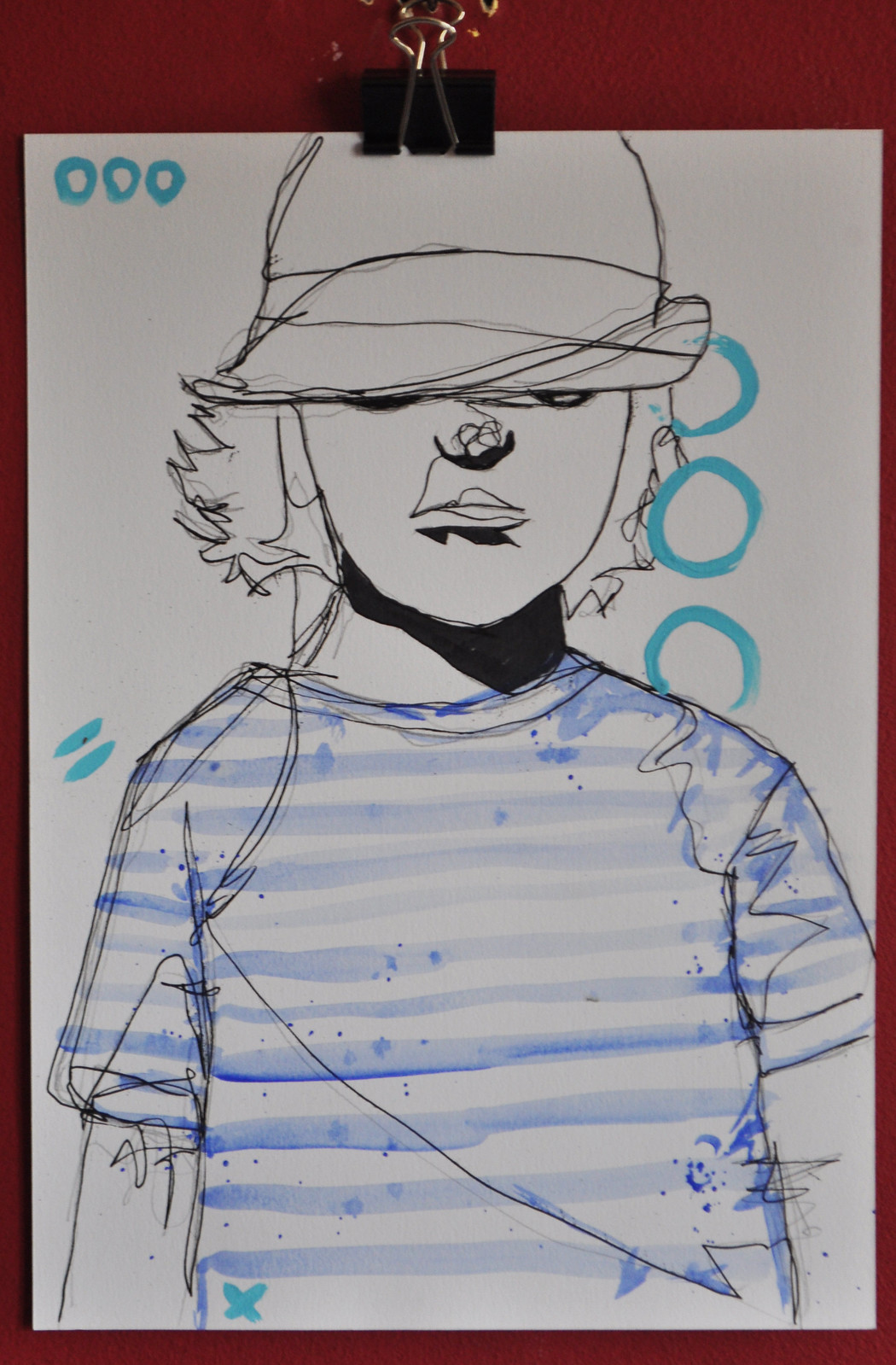 It’s funny that because this picture is on a sheet of A4 paper you don’t really get an impression of size of the subject. The person this picture is based on is actually a giant at well over 70 metres tall. But that doesn’t come across well in the picture. Maybe I should have added some smaller things in by way of perspective but that’s never been my strong point and I fear I would have made it all just look a bit odd. Suffice it to say that he eats cows whole when he wants a burger and drinks beer by the bathtub full. The clue is actually in the title as he’s called ‘little’ boy blue in that particularly British way of giving someone a name that is somewhat opposite to their obvious attributes. Like calling a short man ‘lofty’ or a man mountain ‘tiny’. Either way I’m not entirely sure of what to say other than if you come across him it pays to be nice before he decides to use you in a sandwich…

Comments Off on Little boy blue

Hmmmm…. This chap looks uncannily like one half of id-iom. And it would appear he’s just been shot in the chest whilst walking down the street drinking some beer. Like, OMG dude! But don’t worry. He’s an actor. Nobody was injured in the making of this piece. It’s all done with explosive squibs and fake blood. It just looks eerily convincing.

This is, in fact, just an artists’ impression of a scene from the upcoming biopic ‘When we ruled the world’ about the tumultuous and sometimes fiery relationship between the two members of id-iom which is slated for international release in 2015.

Comments Off on Blown away