He who seems most kingly is king 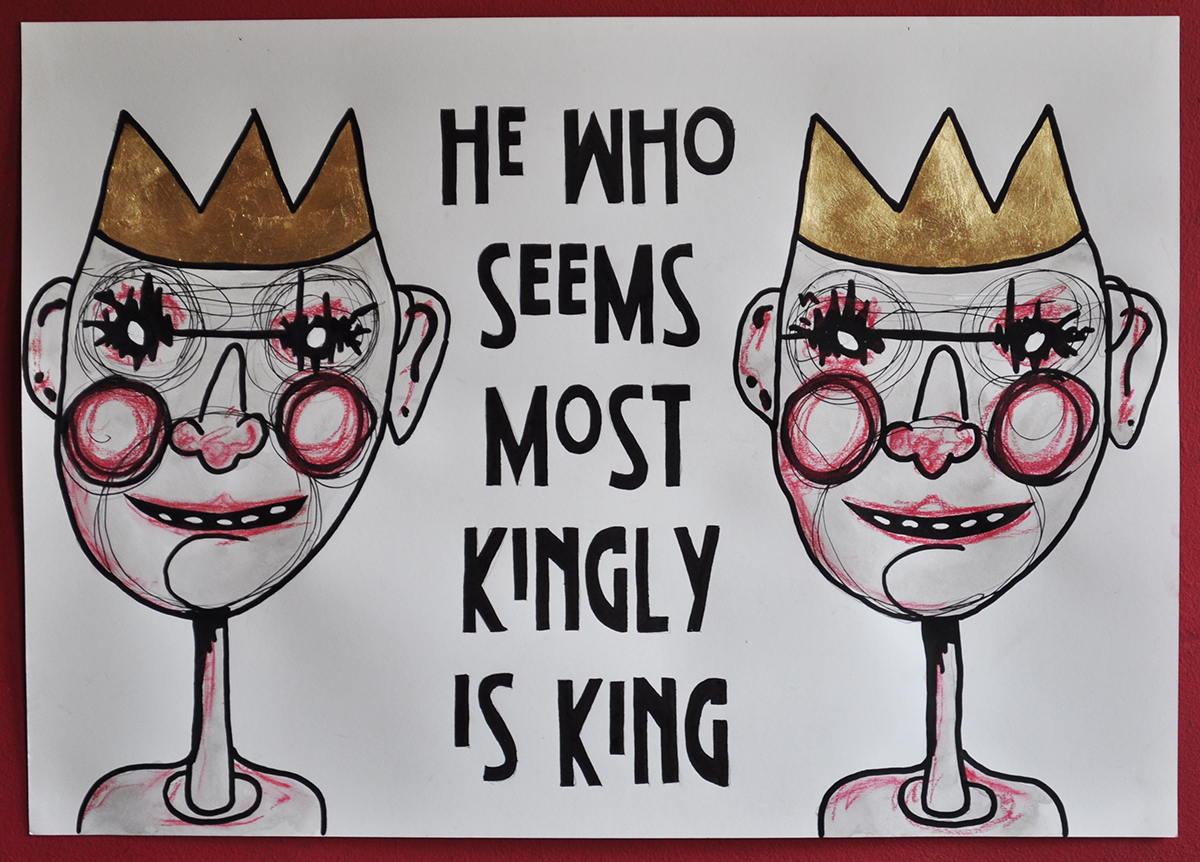 He who seems most kingly is king

So taking a look at these two who do you think is most kingly? I can’t tell myself as I think they both look as shady as each other and I’m pretty sure that’s not what you should be seeing in a king. That said I think the fella on the right just pips the other to the post but who am I to say. Now if we think about the UK we could say that William is most kingly but surely if Harry was king things would be a little more interesting to say the least, but, do you want that is the question. So when all is said and done I’m probably going to stick with Thomas Hardy who is responsible for the quote and stick with William. In fact does it not go to Charles first? Oh bugger!!

Title: He who seems most kingly is king
Materials: Paint pen, acrylic, biro, gold leaf and charcoal
Size: A2

Comments Off on He who seems most kingly is king

A right bobby dazzler and no mistake!

After posting a while back about our part in this collaboration with the fantastic Mimilove we finally have our grubby mitts on the finished product celebrating our bonus April bank holiday. I have just checked on the web and found that the royal wedding even has it’s own official website. If i’ve ever come across a site that deserves hacking for some internet related tomfoolery (other than perhaps some of the multi-national corporate websites) then it’s this one. I’d just love to substitute our picture for the official one on there…

Not only has Mimi included some lovely little cockney sparrows she has also added a crown on the lovely Ms. Middleton and put some words in the mouth of our corgi headed future king William –  ‘Cor blimey! I can’t adam & eve me mince pies. You’re a right bobby dazzler and no mistake.’ If you have any trouble understanding that sentence you are clearly not a cockney and need to go to the internet for translation.

If anyone is interested this lovely collaborative piece is for sale to commemorate the big day – which, you’ve got admit, was a good one. There were all kinds of street parties going on near us although it was difficult to work out if they were celebrating the marriage of Kate & Will, the fact that the had the day off, the fact that it was sunny or perhaps all of the above…

Comments Off on A right bobby dazzler and no mistake!